FRANKENSTEIN AT THE CINEMA - MY REVIEW 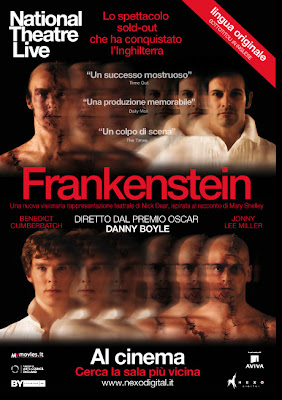 Dannis Boyle’s Frankenstein, the  pluriawarded 2011 theatrical production,  has been a terrific success live on stage at the National  Theatre in London and it has after that also been shown worldwide in movie theatres in the original language.  It arrived in Rome yesterday (Cinema Lux) and it’ll be on tonight too (Cinema Barberini).
I can’t imagine how exciting it must have been for the lucky ones  in the audience at the theatre, but it was amazing and enthralling to watch it on screen last night for me. It was like being on stage with the cast, so with  a really privileged perspective on the spectacular staging.
I’ve always been astonished by the idea of a 19th century woman, Mary Shelley, writing such a modern,  evergreen, disquieting  story and at her young age (19 years old).  However, Nick Dear, whose adaptation Benedict Cumberbatch and Jonny Lee - Miller brought on stage, surprised and moved me with his brilliant work, which turns the novel into a  touching play.
The originality of the show is in the idea of a symbiotic relationship between created and  creator, the monster and the scientist who gave him life, unusually rendered with Benedict Cumberbatch and Jonny Lee-Miller alternating and taking turns to play the two main roles, that of Victor Frankenstein and that of his unnaturally created monster.
The version I saw last night was with Cumberbatch as the creature and Lee-Miller as Victor Frankenstein.

Unlinkely Mary Shelley’s novel, the play is monster-centric.  In the 1818 book, the story of the ugly creature brought to life through scientific experiments in chemistry and galvanization is shadowed by the prevailing storyline dedicated to the theme of the overreacher - Frankenstein, the Modern Prometheus - and his unhappy fate.  The  readers are asked to sympathize with him  not as much as with his wretched creature, though the latter is  seen as  an outcast and as the evil product of a selfish and  prejudiced society.
If in Mary Shelley’s gothic tale  we are asked to pity the poor innocent creature wronged and made wicked by the rejection of other human beings as well as the ambition-driven genius of Frankenstein , very little pity we are able to feel for the selfish, unaffectionate, delirious scientist on stage. If reading the novel we doubt who the villain or who the victim is, in Nick Dear’s play no doubt is left in front of the unfortunate, moving creature .  Benedict Cumberbatch’s  performance was  heartbreaking at times,  from his long opening scene, wordless but so impressive, to the tragic final confrontation with his master in the North Pole. 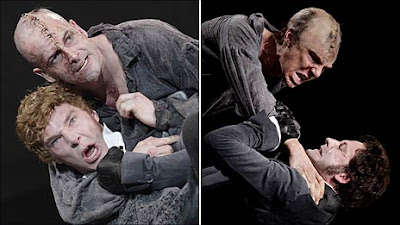 Impossible not to side with the unlucky creature when he painfully acknowledges:

“At first I knew nothing at all. But I studied the ways of men, and slowly I learnt: how to ruin, how to hate, how to debase, how to humiliate. And at the feet of my master, I learnt the highest of human skills, the skill no other creature owns: I finally learnt how to lie.”

These lines are part of an unforgettable, overwhelming  scene: the touching meeting between Elizabeth , Victor Frankenstein’s newly-married wife, and the desperate creature seeking his own revenge on his creator.

This is your universe, Frankenstein! , shouts the now totally aware monster after one of his terrible murders. He had been born good, he only wanted to love and be loved, but hatred, abuse and violence was what Frankenstein and other human beings had taught him. And he had been good and quick at learning. He had better them. A warning to our society who gives birth to tragic, wicked beings it then totally rejects as its own offspring?

Incredible cast and spectacular staging. Awesome and unforgettable.
Don't miss it if
you have the chance to see it.
Posted by Maria Grazia at Tuesday, September 25, 2012
Email ThisBlogThis!Share to TwitterShare to FacebookShare to Pinterest
Labels: At the theatre, Benedict Cumberbatch, Classic literature, Frankenstein, Gothic Novels, Jonny Lee-Miller, Mary Shelley

I'm so happy you got to see it! Thanks for a great review!

Oh, thanks to you for reading and commenting, @Fanny!
It was such a great show that I couldn't resist writing about it.