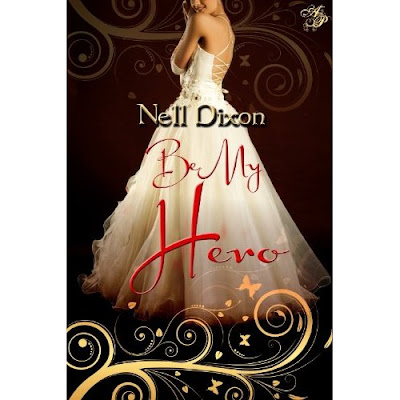 I'm Nell Dixon, a Black Country author, married to the same man for over twenty-seven years I have three daughters, a tank of tropical fish and a cactus called Spike. Winner of the RNA’s prestigious Romance Prize in 2007 and 2010, I writes warm-hearted contemporary romance for a number of publishers in the US and the UK including Myrmidon Press, Samhain Publishing, Little Black Dress, Astraea Press, E-Scape Press and Freya’s Bower.
My latest release is from Astraea Press and is called Be My Hero. Although it's my latest e book release it's also available from Audiolark as an audiobook and should appear at some point in large print.
I first wrote Be My Hero in 2007 and it had a short release life in 2008 until my previous publisher closed. It's a story that's very close to my heart. The heroine, Nathalie has a medical
condition that affects her fertility. As a former nurse, midwife and health visitor I have an extensive medical knowledge but this story was born of personal experience. I had been in Nathalie's shoes, and although my story eventually had a different outcome, I wanted to tell a story about the different shapes of families and relationships. I've had many readers tell me their experiences since the book was released and they've all said very positive things. I didn't want a 'magic pregnancy' ending to Nathalie's story. Nathalie is a realist about her condition and what it means for her and Evan's relationship. She calls on Evan to do what he couldn't do for her before when they parted many years earlier. She wants, and needs him to be her hero.
I cried a great deal when I wrote Nathalie and Evan's story and the book is dedicated to some very special people. It's dedicated to all the staff at Birmingham Women's Hospital and my consultant Mr Afnan. Without their skill and the expertise of Joe Jordan my gynae surgeon, mine and my husband's dreams of a family would have taken a different course. We were married for almost ten years and I lost six pregnancies before the birth of our eldest daughter. I made many friends during those long, miserable trips to the infertility clinic and the surgical wards. God was good, and we were blessed with three beautiful daughters.
In Be My Hero, Evan has to convince Nathalie that he loves her, and wants to be with her, not as a potential stepmother for his little girl, or as some possible future mother for their unborn children, but for herself. Because she is the only woman in the world he will ever love and it's her he needs to make his life complete.
Be My Hero is a stand alone book but the story of Nathalie's older brother Jerome is told in Dangerous to Know, also available from Astraea Press, with The Cinderella Substitute, Nathalie's twin brother's story being released November 1st, again from Astraea Press.

Giveaway
To celebrate the release I'm giving away three pdf copies of Be My Hero. To win, I'd love you to tell me your favourite baby names and why you'd choose them. Names fascinate me and I had a hard time choosing my daughters names. I'll ask Maria Grazia to select three of you from the comments once the post has been up for a week and I'll email the prizes out to you. The giveaway is open worldwide, of course, and ends next Tuesday October 2nd. Don't forget to add your e-mail address!

Here's a little bit more about Be My Hero
Nathalie Mayer is thirty-four. On the surface she is an attractive, happy, single, successful woman running her own bridal business. Despite her line of work and her obvious delight in other people’s weddings, including that of her twin brother, Nate. Nathalie has always declared that a settled relationship is not for her. There has only ever been one man whom Nathalie felt she could love.
Evan Davies is back in town after a six year absence. Last time he was here, he and Nathalie had tentatively begun to take their friendship to a different level. Now he’s home again and has the reason for his sudden departure from six years ago with him – his daughter, Polly.

Be My Hero is available as an audiobook from http://www.audiolark.com/books/be-my-hero
Be My Hero – from Astraea Press and on Amazon and as a Nook Book
http://www.amazon.com/Be-My-Hero-ebook/dp/B0095MYT24/ref=pd_rhf_gw_p_t_1
You can read excerpts from all my books at http://www.nelldixon.com
and can find me on twitter as @nelldixon
or facebook as http://www.facebook.com/pages/Nell-Dixon/228642037151856

And for a boy I would chose William because it means "protection".

No baby on the way for me but my latest hero and heroine have just had a little girl called Florence. That was my gran's name but I've also realised it was chosen for the Csmerons' new baby!

Always liked the name Lauren for a girl, but I never got to use it as I had two boys!

This sounds like a great book! What an interesting premise! Hmm. I have four children and all of them have been so much fun to name! I'm a fan of different names so right now I love Seraphina, Solomon, Sebastien, Kessen and Taite. Those are fun.

You cover is beautiful! Congrats on another book! I like the name Ella and for a boy Garret!

Fun giveaway! Since I have two babies (well not really babies any more) I will tell you their names. Ariana and Kaiou. We picked Ariana because we thought it sounded pretty and Kaiou is a Brazillian name although I have had people tell me it looks and sounds Egyptian. Also it is pronounced like the cartoon character Calliou.

I have no babies and it is highly likely I will never have one, but I have a clear idea about my favourite baby names.
The first on the list is Rebecca because once I had a dream..and I was a mother, a happy mother of a baby whose name was Rebecca.
Second name is Andrea, because I like its sound in Italian, in English and in French....
and then there is Elisa, because is the name of the best person in the world, my mother.
maribea at tiscali dot it

I don't have any children, and will definitely be a while before I have some :) I love the names Rose, Elena and Elizabeth for girls and boys - Richard, Roy, Damon.

Isabella and Oliver! Neither were acceptable for hubby! Maybe I get lucky with grand kids - not yet though, not for a long while!
Great idea for a give-away, thanks!