Surfing the Net for my classes on Dickens these days , I've bumped into several beautiful Victorian /Edwardian paintings signed by a Dickens (or with a beautiful Dickens portrayed ) which I didn't expect. This does not mean I  discovered old Charles's talent for Art and Painting but that I found out he had a daughter who was a painter: KATE DICKENS PERUGINI. (1839 -1929) Here she is in a painting by John Everett Millais, one of the Pre-Raphaelites.
In 1880 Sir John Everett Millais painted her in one of his "most striking portraits",  but he had previously used her as a model for his painting The Black Brunswicker (1860) (below) 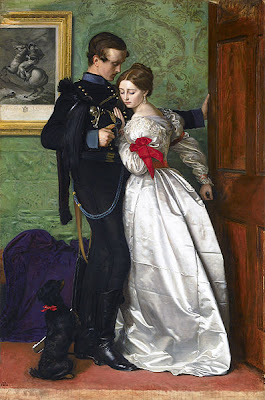 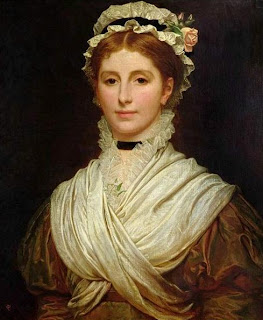 "Kate Perugini" is the most commonly used form of her name, from her second husband's surname, but she was baptised Catherine Elizabeth Macready Dickens, and known as Katey from childhood.
She was Dickens' youngest surviving daughter, and according to her siblings her father's favourite child; he named her after his friend , actor William Charles Macready. As a girl, she also bore the nickname "Lucifer Box" for her hot temper.
Her first husband was the artist and author Charles Allston Collins, younger brother of Wilkie Collins; they married in 1860. After his death from cancer in 1873, Kate married another artist, Charles Edward Perugini. She became a successful painter of portraits and genre paintings, sometimes collaborating with Perugini. She started exhibiting her works at the Royal Academy shows in 1877. The Peruginis were active in artistic society, and maintained friendships with J. M. Barrie and George Bernard Shaw among other celebrities of their era. 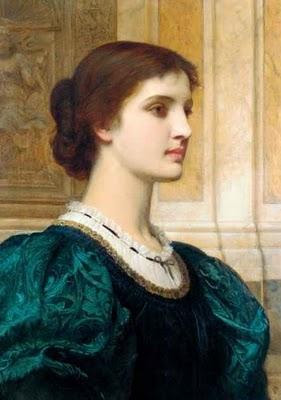 Kate was the primary source of biographer Gladys Storey for her book Dickens and Daughter, in the process revealing Dickens's affair with the actress Ellen Ternan.
In Lucinda Hawksley's biography, Katey: The Life and Loves of Dickens's Artist Daughter,  she is described as an extraordinarily determined girl who defied Victorian conventions to live and love as an independent woman. Blessed with a privileged upbringing in a family that moved between London, France, Switzerland and Italy, Katey pursued her love of painting, acted in her father's plays, modelled for John Everett Millais and, as the daughter of the most famous writer of the time, enjoyed a high profile in Victorian society. Yet, she refused to be eclipsed by her father and fought to establish herself as an artist in her own right. Family life in the Dickens household was turbulent and the unhappy atmosphere that followed the eventual breakdown of her parents' marriage drove Katey to marry young. Her first husband was the chronically ailing Charlie Collins, brother of the famous author Wilkie Collins, and theirs was a sexless but otherwise companionable union, while Katey threw herself into a passionate and very

un-Victorian affair with celebrated artist Val Prinsep. After Charlie's untimely demise, the widowed Katey married the handsome Italian artist Carlo Perugini, with whom she had fallen deeply in love. Despite the happiness she finally found in her second marriage, Katey often suffered from deep depression, particularly following the death of her beloved father and of her baby. But she remained active, pursuing her career as a painter, championing Charles Dickens' works, and befriending such eminent figures as J. M. Barrie and George Bernard Shaw. Katey Perugini lived to be almost ninety and her artistic prestige, which flourished during her lifetime, still persists to this day. Here are some of her most representative works

What an interesting and visually beautiful post--I would love to read more about Kate Perugini. I really love the paintings of hers you posted.

I love, love, love the Pre-Raphaelites! Aren't they so passionate and romantic? Anyway, I first met Kate Perugini a couple years ago, when I deeply fell in love with her brother-in-law, Wilkie Collins. Thanks for this post, but please make one even about the exhibition you're going to visit, I'm so curious :)

@JaneGS
I'd love to read mor about her. This biography by her descendant, Lucilla Hawksley, sounds good. Let's see what else can be found, too.
@Claudia
I'll be glad to do it, Claudia. I should visit the exhibition in Rome on the 5 or 6 March so, stay tuned!

Many thanks to both of you for your kind comments! MG