I HAVE BEEN WATCHING ... AURELIO ZEN, AN ITALIAN DETECTIVE ON BBC1 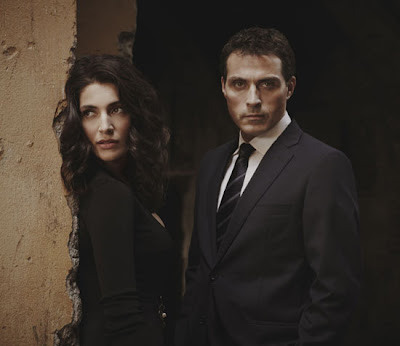 I was very curious to see how the British - British TV - represented Italy in this crime series. I  usually don't mind stereotypes and picturesque depiction of my complex, beautiful country so much, I'm rather used to them.  Italian TV  itself tends to depict Italy always  highlighting its defects and never its qualities, so much that I avoid watching the news and in general TV programmes,  I've done that for a couple of years now.  Too depressing. I prefer  seeing  films and DVD coming from abroad,  especially British TV drama.
Set in and around Rome, and based on the best-selling novels by the late Michael Dibdin, this mini series in 3 parts  features many of the combined attractions of Italy and the Dibdin novels – thrilling investigations, fun, warmth and beautiful people. 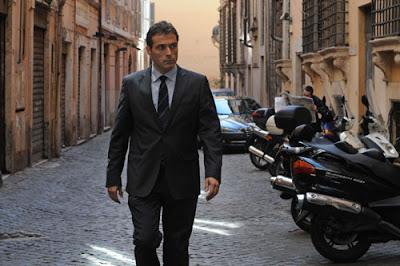 I have to say,  I liked Italy according to BBC, Michael Dibdin  and  Simon Burke, the screenwriter who adapted the novels for the TV drama. It's clear they all love/d my country very much.
Michael Dibdin lived in Italy for many years and had 11 Zen books published, which continue to entertain readers around the world. He died three years ago.Simon Burke abandoned his life in south London and moved to Umbria with his family. Aurelio Zen is no super cop, but a flawed ordinary bloke working as a police detective as if it were the most ordinary job in the world. He is someone who has been trying  to work as honestly as he could and , as a reward after his work on a delicate case, has been relegated behind a desk (this is Italy, indeed) , but not annihilated. Aurelio has to cope with a broken marriage, an affair with a charming married colleague, his fragilities and  fears, his lucky and unlucky moments, friendly politicians pressing on his work and criminals, of course. He is someone who still believes he has duties and tasks to fullfil and perform and is always ready to self-sacrifice. Uno sfigato, Italians will think. Most of us  prefer winners. 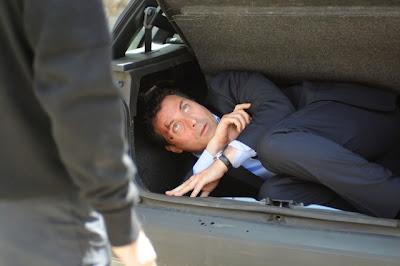 Zen is handsome, humorous and romantic and I think Rufus Sewell was a  perfect choice to play Didbin's delightful creation . He is very good at comedy. If only he spoke Italian! But he does seem Italian, his body language is stunningly Italian in many scenes. Bravo, Rufus. Especially when he has to play the son.  Italian men and their mothers ! I don't think it can be  natural or easy  for a British actor to play  the never too-grown- up- for- his mother,  Zen. This  belongs to our  planet.
Joking, of course. However , it was rather strange to listen and watch  all those characters with very Italian names speak  English all the time. The only Italian words were spoken in the background, while all the protagonists spoke English with their own accent: Italian for Caterina Murino (Tania, Zen's love interest) , French for Catherine Spaak (Zen's mother) , American for Francesco Quinn (Zen's friend, played by Anthony Quinn's half-Italian son) , British for Rufus Sewell, Greg Wise, Ben Miles and Ed Stoppard among others. However , I didn't mind the variety, it didn't disturb me that much. 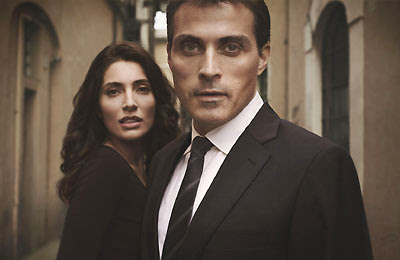 I've found this series not perfect but beautiful to see (Rome!) and  really amusing. Now , I'm ready to see how many defects and flaws Italian audience will find once it is dubbed and aired here, since it is a  BBC/Mediaset co-production but, you see , I don't mind. I'm used to Italians loving silly American series , absurd (obscene) home-made reality shows and ... even unbearable TV news. Or to them playing one of their favourite games, criticism at any cost .
P.S. Yes, Zen is a real Venetian surname,  pronounced as Tzen. 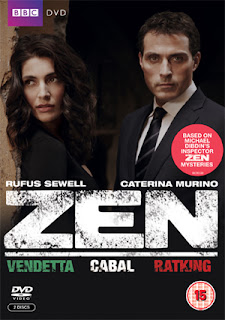 Zen at Imdb
Episode list
Zen DVD at BBC Shop
Rufus Sewell on playing Detective Aurelio Zen (watch the interview)
Rufus Sewell - If Zen was a film ... (watch the video)
Posted by Maria Grazia at Thursday, February 10, 2011
Email ThisBlogThis!Share to TwitterShare to FacebookShare to Pinterest
Labels: About me, BBC Drama, Welcome to Italy

Thanks for the great review. I've read some of the Aurelio Zen books and hope we get to see the series in the US. (I also like Rufus Sewell!).

Rufus Sewell himself says his Zen is quite different from Dibdin's, I mean they admit they've changed quite enough from the original. I hope you won't be disappointed. Thanks for your comment. MG

Hello-ooo! Critic-at-any cost speaking! :P
Unfortunately I can't say much about this series, because I've only watched ep. 1 so far, but since I like Rufus S. (despite his voice!) and Roma as a location for TV and Films, I'll try to do my homework as soon as I can.
BFN,
K/V

watched all 3, mainly because of Rufus ;)
while I found them to be entertaining, nicely photographed, and a great advertisment for Rome, I also thought the stories were a bit predictable and covered just about any Italian stereotype in the book :)
Still, might rewatch them now and then, TV equivalent to easy listening ;)
for my Rufus treat I'd rewatch Pillars of the Earth :)

Rome is as much a character in this series. I don't mind the variety of accents of English but wish that Rufus had adjusted his & shaved off the all too British sound to add to his character.

Loved this series! Rufus Sewell was amazing as Zen. When I read the books now I see him. :) Beautifully filmed and such an awesome soundtrack, too. Wish they would film a lot more of them and wish the soundtrack were available on CD.