COLIN FIRTH : A KING NOT YET USED TO RED CARPETS? 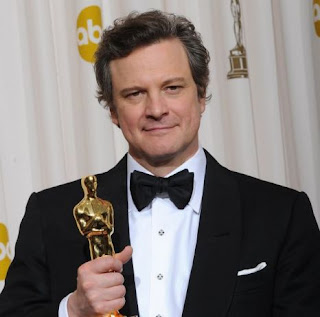 I couldn't resist and went to bed last night, but I truly wanted to watch it live. The Academy Awards Night the show of the Oscars,   I mean. It started when it was midnight here in Italy and I really couldn't make it, I had to go to sleep. Colin Firth made his acceptance speech at about 5.30 and I was still sleeping. However , I got up early as usual,  checked the news and was so happy at being reassured: Colin Firth and The King's Speech had got what they deserved. They had won!
I couldn't see or  listen to the winners' acceptance speeches before the afternoon. I did it and get moved, of course, though none of them sounded unforgettable.
I saw The King's Speech not long ago and agreed with a review that defined it  as ..." a speech that leaves you speechless",  impossible not to love it.

So,  for the first time after many years , I got interested in the most glamorous red carpet and award giving/receiving show, which I usually can't sympathize with. Honestly, I've always hated the stardom and what it meant. This time,  it was different. Colin Firth is someone I can highly esteem and even sympathize with. The same happenend when Giuseppe Tornatore, Gabriele Salvatores or Roberto Benigni won. They were Italians, yes! But they were, especially, extremely out of  and far from  the Hollywood star system.

This time, with Colin Firth and his Italian wife, Livia Giuggioli,  it was as if Italy partly won again. But I can as well and  willingly support British talent, as you can guess having a look around my blog. 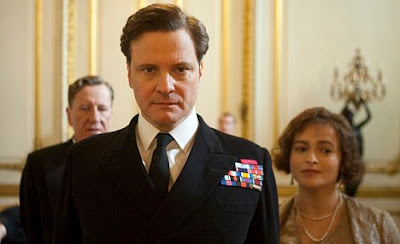 I was only disappointed for Geoffrey Rush : I wished he had been rewarded too for his extraordinary performance as Lionel Logue . But Mr Colin Firth made it as best actor and The King's Speech as the best film this year and other two awards came, as well. I , actually,  would have awarded Colin Firth last year, already, for his extraordinarily touching performance in "A Single Man". 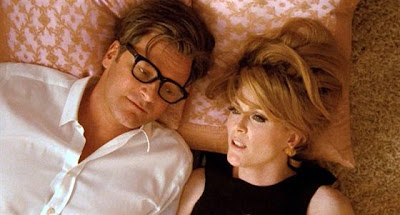 However ,  Colin Firth  has won every possible award in this amazing year and did it graciously: he was funny, humble and charming on any occasion and,  as he confessed in this interview in Italian in the video below: he is only apparently calm, inside "è un casino..., a pezzi" , that is , he is a mess, shattered. Even after more than 30 red carpets. "Ma a casa nostra non abbiamo tappeti rossi" ( we have no red carpet in our home), he jokingly assures.

I particularly love this interview in Italian. How odd but warming is to hear his Italian. He sounds so spontaneous and humble. Friendly, charming, nothing like proud and snobbish Mr Darcy. 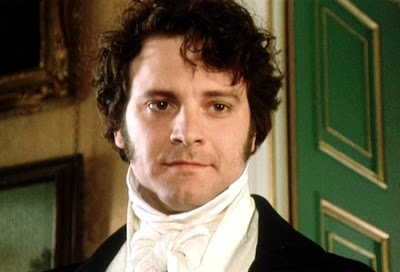 Though he was, has been, is and will always be OUR  Mr Darcy.
Congratulazioni!  Grande, Colin!
Posted by Maria Grazia at Monday, February 28, 2011
Email ThisBlogThis!Share to TwitterShare to FacebookShare to Pinterest
Labels: Colin Firth, Events

Thanks for posting that video Maria! Wonderful to see him "come alive" in Italian!!

Too bad that you had to go to bed but at least you woke up knowing that all was right with the world!

Oh dear! Thanks for this video in italian! :)
He seems to be so spontaneous!

Hi MG, I didn't manage to stay up either last night but my husband got me up early this morning to tell me the great news. Colin is a great actor and a great man and he deserves fully this "shower" of awards. I'm sorry for Geoffrey Rush too. I think he was fantastic and moving in his role and it's a shame that he didn't get an Academy Award. Saying that I haven't seen The Fighter yet so I cannot comment on Christian Bale's performance. I love Colin when he speaks Italian. Such a wonderful voice. Ciao. A.

I share your feelings about thse events Maria but I turned the Awards on just in time to see Colin Firth receive his award. I was so pleased for him! This was a wonderful film and deserved every award. I was surprised to find that there were a number of Australians responsible for the production but was disappointed Geoffrey Rush missed out. Thanks for posting :)

As an Italian-American, I'm thrilled to see Colin speaking such beautiful Italian with his gorgeous wife at his side. Such a wonderful man.

Colin (and Livia too) absolutely deserve this recognition: he is a great actor - despite some odd choices - and I keep saying it since 1985. At last, he won't be "Colin who?" anymore :)
I'm glad to see that he's become your Darcy as well, though ;)
xx K/V

I thought Geoffrey Rush deserved to win too! Colin Firth speaking Italian is so cute! Thanks for sharing!