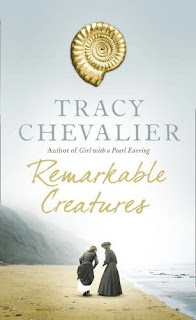 Mary Anning and Elizabeth Philpot were truly remarkable creatures, extraordinary 19th century women, and we must thank Tracy Chevalier for bringing them back to life.
Remarkable Creatures is an engaging  two-voice narration  based on an accurate reasearch on the historical and scientific background. An entertaining and very informative reading.
Mary Anning, from a working - class family,  was struck by lightning as a baby and, from that moment on, it is clear she is different. Her discovery of strange fossilized creatures on the cliffs of Lyme Regis sets the world alight. But Mary must face powerful prejudice from a male scientific establishment, not to mention vicious gossip and the heartbreak pf forbidden love. Then - in prickly, clever Elizabeth Philpot , a fossil-obsessed middle-class spinster - she finds a champion, and a rival. Despite their differences in class and age, Mary and Elizabeth's loyalty and passion for the truth wins out.

Their relationship strikes a delicate balance between fierce loyalty, mutual appreciation, and barely suppressed envy. Ultimately, in the struggle to be recognized in the wider world, Mary and Elizabeth discover that friendship is their greatest ally.
Remarkable Creatures is a stunning novel of how one woman's gift transcends class and social prejudice to lead to some of the most important discoveries of the nineteenth century. Above all, it is a revealing portrait of the intricate and resilient nature of female friendship, set at Jane Austen's time.
In fact, apart from its original scientific pattern, this novel can be considered quite Austenesque. And this was the aspect which caught my attention more than anything else. 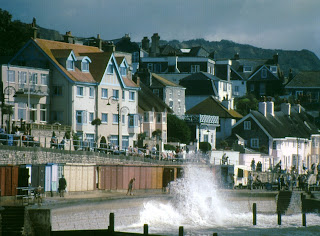 For example, the novel starts as a surprising reminder of Sense and Sensibility. Three sisters have to leave London and their comfortable, mundane life there,  after their only brother's marriage. They have to choose a  less expensive residence in a small village by the sea, Lyme Regis, the same village Jane Austen herself chose as part  of  the setting in Persuasion and visited in her real life in September 1804. Their fear for their future, their disappointments on the market of marriage, their hopes at taking part in the balls and parties at the Assembly Rooms at Lyme or in London remind of that Austen's world we so much love.
Here is how T. Chevalier describes the three Philpot sisters' arrival at their new humble home in Lyme, Morley Cottage. Doesn't it remind you of the Dashwoods' arrival at  Barton cottage?
"Morley Cottage was a shock at first, with its small rooms, low ceilings, and uneven floors so different fron the London house we had grown up in. It was made of stone, with a slate roof, and had a parlour, dining room and kitchen on the ground floor, with two bedrooms above as well as a room in the eaves for our servant, Bessy. (...) There was not enough room in the cottage to fit our mother's piano or sofa or mahogany dining table. We had to leave them behind in London (...) The physical reduction of space and furnishings mirrored our own contraction, from a substantial family with several servants and plenty of visitors, to a reduced household with one servant to cook and clean, in a town with many fewer families whom we could socialise with". (pp. 23-24)

Jane Austen is only mentioned in the novel once by Elizabeth Philpot, who is jealous of Mary Anning's relationship with Colonel Birch and scolds her sister Margaret for keeping Mary's hope to marry the gentleman alive. Mary is just a poor woman from the working -class and, though an extraordinary fossil hunter, she could never hope to marry a gentleman:
"Your Miss Austen would never allow such a marriage to take place in her novels you so love. If it can't happen in fiction, surely it won't happen in life" (p. 210)
Tracy Chevalier admits there are no reasons why Jane Austen and Margaret Philpot could not have been in the Assembly Rooms at the same time. Indeed, Jane did meet Richard Anning (Mary's father), for she went to his shop to have him give her a quote on fixing the broken lid of a chest. According to a letter she wrote to her sister, he charged far too much, and she took her business elsewhere.
Remarkable Creatures is a work of fiction but most of its characters really existed and events such as Colonel Birch's auction and the Geological Society meeting where Conybear talked about the plesiosaur did take place. Historical figures have rarely been so cleverly used ,  it's said in a review of this stunning story in the Guardian.
In this clip Tracy Chevalier talks about her novel. It's very interesting to listen to how she came to writing such an original story ...
I must thank my blogger mate and friend, Antonella aka lunarossa,  for this beautiful read .
Posted by Maria Grazia at Tuesday, July 13, 2010
Email ThisBlogThis!Share to TwitterShare to FacebookShare to Pinterest
Labels: Books, From my bookshelf

Wonderful review Maria, it sounds interesting! I love my Austenesque novels so it is probably one I should check out! Thanks for the review!

@Meredith
This novel is very much about fossil hunting but with several Austenesque elements which drew my attention. A very interesting, original historical read, anyway!

I'm very glad you liked it, dear MG! Great review. As Tracy says in her short video, after reading this book I felt like going out looking for fossils and visiting Lyme Regis. Actually I hope to go for a few days this summer...I love Tracy as she is a very serious and detailed researcher and an engrossing narrator. Good night. Ciao. A.

I also thought that the Philpot sisters reminded me of the Dashwoods and S&S. I loved reading your review, and really enjoyed the clip of Chevalier talking about her book (especially the part about getting her hands dirty). I agree, this is a remarkable book, well-written, compelling, and so insightful about Regency life as well as the scientific discoveries that took the nineteenth century by storm.

I've been very curious about this book since I first heard about it. I loved the video. Thanks for another wonderful, in depth review.

I can't wait to get my hands on this book! Thank you for this great review. Historical figures and events of the 19th century have always fascinated me!