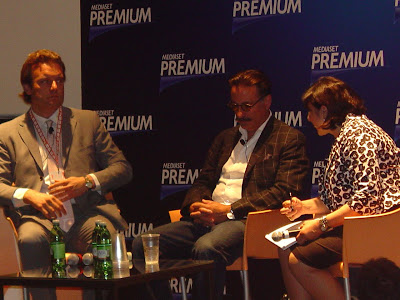 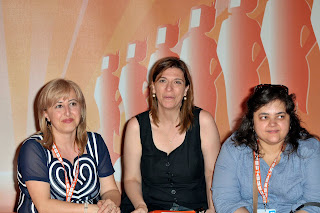 My weekend in Rome for the Fiction (TV drama in Italian) Festival has started with a master class by Andy Garcia. To my great surprise I didn't meet the glamorous star from Hollywood I expected , but an interesting person, an actor passionately in love with cinema and full of plans for the future after a long successful career. He has what I like to  call the humbleness of the great. He talked to a crowded theatre for 90 minutes in a blend of English and Spanish about the time he just dreamt of a career in the cinema working as a waiter and fondly studying( his words ) Italian neo-realism or Hollywood great movies such as The Godfather, Taxi Driver  or Harold and Maude.
He is shooting a film in Mexico, Cristiada, so he apologized for the "funny moustache" (his words again) needed by his character. 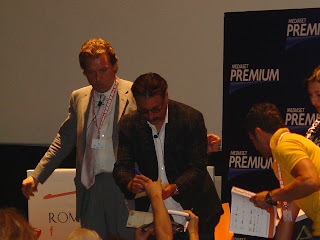 We learnt about his love for music, from the percussions to the piano (which he started playing while shooting The Godfather III in Rome and now plays wonderfully well  according to his interviewer) ; his Cuban origins and his siding with the Cuban community living in Miami; his supporting independent cinema because "you can be really free in it, you can make a movie exactly as you want to make it";  his disapproval of dubbing (I agree!) since any performance should be enjoyed in the original version; his being very reserved in his private life but opened up to his audience when playing a role, putting as much of himself in it as he can. "You know about me more than I know about me", he admitted.
As to his relationship with TV movies and series, he announced he is going to shoot and direct a long series, 10 episodes at least, no title yet. Finally,  he left but only after kindly answering many questions from the audience and  signing lots of autographs.

The event went on with the screening of FOR LOVE OR COUNTRY (2000) , a TV movie starring Andy Garcia and Gloria Estefan among others, about the real story of Arturo Sandoval, a Cuban musician who finally found asylum in the States. A deeply felt performance of a great actor which was so touching after listening to his memories!
2. STRIKE BACK SCREENING FOR THE CONCORSO INTERNAZIONALE 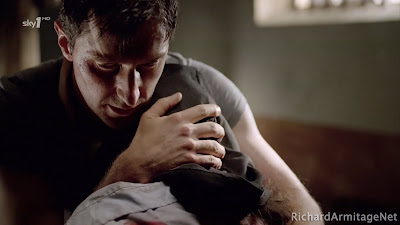 What a bore! She took me to an awful conference of a famous American actor. Yes, I know him, he's a very good and popular Hollywood star, but I was here to see Richard Armitage! Why didn't he come? I so wanted him to come... well, I was aware it was impossible... but hope is hard to die. She stayed there listening and taking pictures and notes while that Andy somewhat spoke and received applauses and praises and I longed for time passing by as quickly as possible! We stayed there till 3.30 in the afternoon, and black self  was even moved to tears while watching that TV movie about a Cuban jazz musician . *rolls eyes*. 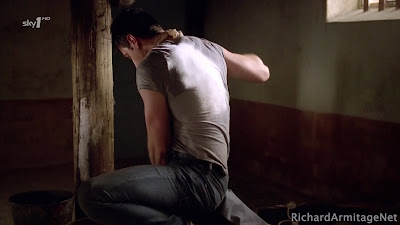 Long before 8.30 we were already at the Adriano Theatre to see if we could assist to a miracolous materialization of the man himself. "Unexpect miracles denied",  despicable Collinson must have ordered . We sat in a quite empty theatre, sala 5. Wasn't STRIKE BACK targeted to a male audience? There were only women there! Were we all there for the same reason? I bet we were. The lights went off and I couldn't relax on that comfortable chair. It was cool because of the air conditioning system but I was suddenly sweating and breathing heavily. Can you imagine the gorgeous one on a huge theatre screen? And his voice coming out from a dolby-surround system at a very high volume? Try and you'll start sweating too! 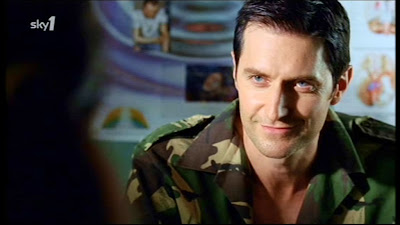 It was great. Only I (we?) was disappointed ... At the same time in the other screens of the Adriano theatre, they were showing  Lost, Smallville, The Seawolf, Spartacus ... unfair and unjust they were!!! Most of the young people there wanted to watch those series. Blame on the organizers. They might have done much better at publicising the entire event. Lucky us, who could enjoy our giant blue-eyed handsome man in a quiet , quite intimate , environment.
Have a great weekend!
Red self
Posted by Maria Grazia at Saturday, July 10, 2010
Email ThisBlogThis!Share to TwitterShare to FacebookShare to Pinterest
Labels: Events, Richard Armitage

Hi MG's black self! The master class with Andy Garcia sounds very interesting. Is nice to know he's a kind, 'normal' person as a great actor.

Hi MG's red self! Just imagining watching those scenes between John and Katie in a big giant screen with sound as he were speaking to your ear...*shudders*
So unfair to show everything at the same time! If they would have shown he series at a different time, we would have a few converters right now ;).

Seems like you had a great time MG :D

Wow, this sounds (and looks) wonderful, MG! Andy Garcia is one of my favourite actors! Did you get to speak to him? Could he understand Italian a bit? I watched the Sandoval's dvd some time ago. A very touching performance. But I love him best in Ocean 11 with George, Brad and Matt. To die for. Ciao. A.

You have been on my mind!! I was hoping everything would fall into place. In my book you were still very, very lucky! I've enjoyed Andy Garcia's work over the years. He still is kinda hot. But to watch youknowwho on a B I G screen in surround sound....yumyum

Thanks for sharing your black & red selfs!!!

I always enjoy Andy Garcia's work - like lunarossa I think he was so much fun in the Ocean's series! Having watched interviews with him (not in person like lucky you!!) AG certainly has more going on than just being "a star".

OOOOHHHH and JP/Richard Armitage on the big screen - that'll add to global warming!!

Thanks for posting, Maria. A pity the SB audience was small but i'm sure it was enthusiastic. Andy Garcia sounds very interesting.

Sounds like a great time, tho...I would have beenn wishing for Richard too! Strike Back is awesome, as is Richard! Andy Garcia? I live in the US and I don't think I even know who he is..but Richard? Oh yes!