BOOK UNDER THE SPOTLIGHT: DIANE SCOTT-LEWIS, HOSTAGE TO THE REVOLUTION 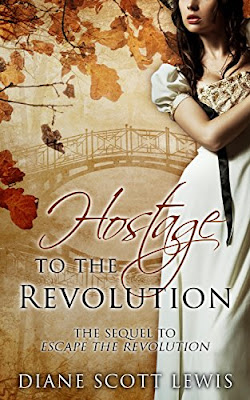 Diane Scott Lewis's new book,  Hostage to the Revolution, is the perfect reading for historical fiction lovers fond of the Poldark saga, of tales set in the English Georgian Era or the French Revolution,  or for those already appreciating  her writing.
The story of young Frenchwoman, Bettina Jonquiere, came to  Diane,  while travelling through Cornwall a few years back. Once back in the States, she thoroughly researched the eighteenth century and gave life to Escape the Revolution, set mostly in Cornwall, which was her first novel, and  now to a  sequel, Hostage to the Revolution, set in New Orleans and France.

Hostage to the Revolution: book blurb

Sequel to Escape the Revolution. In 1796, ruined countess Bettina Jonquiere leaves England after the reported drowning of her lover, Everett.  In New Orleans she struggles to establish a new life for her children. Soon a ruthless Frenchman demands the money stolen by her father at the start of the French Revolution. Bettina is forced on a dangerous mission to France to recover the funds. She unravels dark family secrets, but will she find the man she lost as well?

The woman lowered her Carnival mask to reveal the perfect, glacial features of Lucrece Bardou, Geralde’s former fiancée.
Lucrece raised her elegant brows. “Very well, we’ll talk here. Are you seeing my Geralde? You have been noticed with him these past months.” She swatted her fan. “And you were dancing with him out front, like two peasants.”

Bettina half-expected this and stifled a laugh. The wine seeped into her muscles, calming her. “We have spent time together, yes. Why is it your business? I heard you were involved with someone else.”
Lucrece tipped up her perfect chin. “That didn’t work out. Geralde and I were practically married. I plan to convince him to change his profession and settle down, with me.” She poked her fan into Bettina’s face. “Without you underfoot.”


Bettina swiped the fan aside. “If he wants to court me, that is our affair.” She grew irritated, yet the idea of his courting her again sent excited quivers along her body. But what about Everett? Could she banish the idea of cheating on a man declared dead? Would the deep hollow in her heart finally heal? “I have nothing more to say to you, Madame.”
“You stay away from him, I’m warning you.” Lucrece turned. A masked man bowed in her path. She jabbed her fan into his chest. “You had better not be a Negro, sir. The law forbids you to mask.” She tossed her curls in superiority and flounced off.
Bettina laughed at the woman’s haughtiness and walked in the other direction from the shrew. She looked around for Geralde, unsure if she should warn him about Lucrece. He may not even want to court Bettina again, and she couldn’t blame him. She’d find him and ask him to dance with the others, under the gigantic crystal chandelier that shimmered and reflected candlelight in sprinkles across the ceiling and walls.
Someone tugged on her sleeve. Bettina glanced down to a Negro child dressed in white cap and apron. “Yes, dear?”
“Pardon, Madame. A man wishes to speak to you.” The girl stared up with large black eyes. “He is on the side gallery.”
Was it Geralde, hiding from Lucrece? “Show me where. Is he a handsome man in buckskins?” She followed the child down a short hallway to a set of long windows. Then she hesitated, uneasy in the shadows. “Can you ask him to come inside?”
“He says he has news about your children.” The girl opened the windows.
Could Fred be here? Were the children ill? Bettina winced and poked her head out to scan the dark porch. “Who is here?” Now she wished she’d brought someone with her.
A man stepped forward, and waved the girl off. The long windows clicked shut. “I have news from your nephew. You must return to the cottage.”
“What has happened? Are my children all right?” She hurried out, thoughts confused.
He clasped her arm. “Come with me, Madame, and I will explain.”
“Tell me who you are first.” She resisted his tug on her arm, her skin prickling.
His grip tightened and he shuffled her toward the steps. “Do not fight me, I have a gun.”
“Mais non. How dare you. Let me go!” Bettina gasped and struggled. A pistol barrel stabbed into her side. 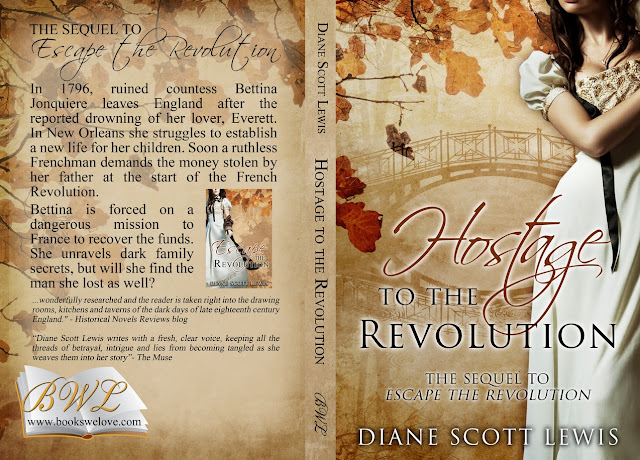 Buy Hostage to the Revolution  paperback or kindle

If you've missed book 1, Escape the Revolution, and wish to read it,  you'll find it here

Diane Parkinson (Diane Scott Lewis) grew up in the San Francisco Bay Area, joined the Navy at nineteen and has written and edited free-lance since high school. She writes book reviews for the Historical Novels Review and worked as a historical editor for The Wild Rose Press. She’s had several historical novels published. Diane lives with her husband in Western Pennsylvania.