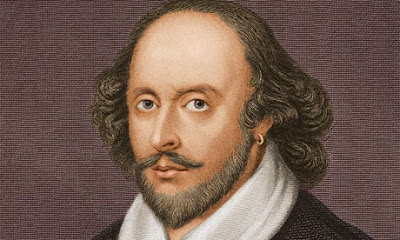 William Shakespeare (1564 - 1616)
The actual date of Shakespeare's birth is not known, but, traditionally, April 23, St George's Day, has been Shakespeare's accepted birthday, and a house on Henley Street in Stratford, owned by William's father, John, is accepted as Shakespeare's birth place. However, the reality is that no one really knows when the great dramatist was born. According to The Book of Common Prayer, it was required that a child be baptized on the nearest Sunday or holy day following the birth, unless the parents had a legitimate excuse. As Dennis Kay proposes in his book Shakespeare:

If Shakespeare was indeed born on Sunday, April 23, the next feast day would have been St. Mark's Day on Tuesday the twenty-fifth. There might well have been some cause, both reasonable and great -- or perhaps, as has been suggested, St. Mark's Day was still held to be unlucky, as it had been before the Reformation, when altars and crucifixes used to be draped in black cloth, and when some claimed to see in the churchyard the spirits of those doomed to die in that year. . . .but that does not help to explain the christening on the twenty-sixth (54).

No doubt Shakespeare's true birthday will remain a mystery forever. But the assumption that the Bard was born on the same day of the month that he died, April 23,  gives the mystery of his life one more fascinating aspect.

To celebrate Shakespeare's genius and his 449th birthday here's a great giveaway contest for you. Choose one of the Shakespeare-related books in the list below, leave a comment with the title you would like to win, add your e-mail address and ... good luck! The books are all paperbacks. The contest is open worldwide. This giveaway ends on April 30th.

2. Bill Bryson, Shakespeare: The World as a Stage

10. Any of Shakespeare's plays in this edition (choose your title in your comment)
Posted by Maria Grazia at Tuesday, April 23, 2013
Email ThisBlogThis!Share to TwitterShare to FacebookShare to Pinterest
Labels: Books, Giveaways, Shakespeare

Hi, I would like Bill Bryson, Shakespeare: The World as a Stage.
rcoope23(at)myune.edu.au

I would love to win Richard Paul Roe's The Shakespeare's Guide to Italy. Yhanks for the awesome giveaway! :-)

I'd like to choose this one: William Shakespeare, Complete Sonnets and Poems

I'd like to be counted in for Shakespeare's Lady.

I would love to win Shakespeare's Lady. Thanks for the giveaway.
lcbrower40(at)gmail(dot)com

I simply can't resist giveaways related to Shakespeare--I love that he was born in April, it seems such a fitting month for his birth, somehow.

Anyway, I would love to own The Shakespeare Guide to Italy. My 30th anniversary trip to Italy for spring 2014 is shaping up nicely, and this would be wonderful to have in hand as a reference. That and Brunetti's Venice, and I'm all set :)

#10 for A Midsummer's Night Dream!

Excellent giveaway - thank you! I'd like to have J.L. Carrell's The Shakespeare Secret.

The Shakespeare's guide to Italy! :)

I would like to read "The World as a Stage" by Bill Bryson.
Thank you!

I'd like to win The Shakespeare's Guide to Italy. Thanks for the giveaway! :)

I forgot to add my email: etrabelsieATgmailDOTcom

I'd like to win The Shakespeare's Guide to Italy.

I would love to read this one Alexa Schnee, Shakespeare's Lady. Thank you for the great giveaway. :)

i would love to win Romeo and Juliet :)

I would like to win The Shakespeare Secret by J.L. Carrell. Thanks.

I would love to win Shakespeare's Lady by Alexa Schnee.
Thank you for the giveaway :)
milkristia(at)hotmail(dot)com

I'd like to read Bill Bryson, Shakespeare: The World as a Stage.

Please count me in. Thanks.