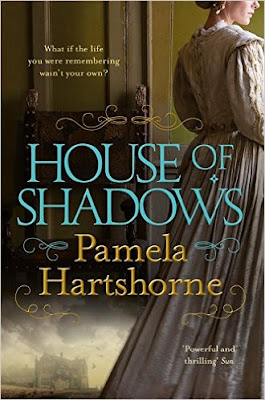 What if the life you were remembering wasn’t your own?

Pamela Hartshorne knows how to intrigue her readers. This is the fourth of her time slip, historical fiction novels I’ve read, and each time I've found myself hooked from the first lines and wanting to go through the pages as quick as possible to uncover the mysteries surrounding the protagonists. I was travelling through Scotland (the book is set in Yorkshire, in the North of England) while reading House of Shadows and I longed to open my copy on any possible occasion and was late at night to go on reading.

It is a haunting story shifting constantly and twistingly between two time lines, from  a present-day reality to the alluring Tudor Era,  but with only one place as its heart: Askerby Hall, the house of shadows.

The central character, Kate Vavasour, wakes up from a coma in a hospital bed and the reader can follow her confused, uncertain steps back to life from right inside her mind, where she is convinced she is someone else, Isabel Vavasour, and where there is no sign of recognition of any of the worried people surrounding her.

She can vivdly remember Isabel’s life, her love for her handsome husband, Edmund,  and the overwhelming tenderness she felt becoming the mother of their son, Kit. Kate realizes she is not Isabel, especially because that young woman lived under the reign of the other Queen Elizabeth, and   perfectly knows that all she sees around her belongs  to a totally different present. Still her mind goes on working very oddly and Isabel is a constant haunting presence.  Kate find herself incapable of feeling anything for her own son, Felix, nor she recalls mourning her late husband, Michael. She has no memory of  them, she has forgotten the feelings she  felt for them and, definitely, she can’t explain why she climbed up Askerby tower, from which she  fell down and only miraculously survived.

Can the whispers in a House of Shadows across time explain the past and clear up the future?

Once Kate is back to Askerby Hall, where Isabel had lived in the 16th century and where she herself  had gone on living with little Felix after Michael’s death as a guest of her parents-in-law, the rich and aristocratic Vavasours,  her mind seems to start remembering more and more  both of  Isabel’s life and  from of her own.

However,  the feeling which prevails in Kate’s mind  in that house of shadows and mysteries is a terrifying fear.  Moreover,  as she starts recalling her own emotions and her own memories, Isabel emerges back from her mind with increasingly disturbing facts  urging Kate to help her look for her little son, Kit.

I remember meeting Pamela Harsthorne in York in March 2015 while she was writing this novel, which still had no title. She had already written 3 novels set in York and in the Tudor Era (Time's Echo,  The Memory of Midnight, The Edge of Dark) and her publishers wanted three more.

How to come out with something based on the same successful layout of time-slip plus a double female protagonist parallel narrative pattern without sounding repetetive? When you are a very professional and very talented writer, you find the way. Very well done, Pamela. Brilliant job.  House of Shadows is intriguing, absorbing, compelling,  fast-paced, smart, well-written, with a solidly constructed plot and believable,  gripping characters.

I can assure you all,   being visiting ancient Scottish castles and historic sites said to be haunted by ghosts during the day and reading Kate/Isabel’s mystery tale at night was the perfect match for a highly thrilling 10 days’ experience. Unforgettable.

In conclusion,  let me make my heartfelt recommendation: if you like a good historical psychological thriller with romance and supernatural elements,  you must read House of Shadows.

When Kate Vavasour wakes in hospital, she can remember nothing about the family gathered around her bed, or of her life before the accident. The doctors diagnose post-traumatic amnesia and say the memories should start returning. Which they do . . . but these memories are not her own. They belong to Isabel Vavasour, who lived and died at Askerby Hall over four hundred years earlier . . .


Returning to Askerby Hall to recuperate, Kate finds herself in a house full of shadows and suspicions. Unable to recognise her family, her friends or even her small son, she struggles to piece together the events that led to her terrible fall. Life at Askerby, it seems, is not as illustrious as the Vavasours would have the public believe. But before she can uncover the mysteries of the present, she must first discover the truth about the past ... Was Isabel's madness real, or was her mistake trusting the one person she thought would never betray her?
Posted by Maria Grazia at Saturday, July 30, 2016
Email ThisBlogThis!Share to TwitterShare to FacebookShare to Pinterest
Labels: Books, ghosts, Historical Fiction, House of Shadows, Mystery, Pamela Hartshorne, Reviews, time-slip novels, Tudor Era, Yorkshire