LAST OF THE FIREDRAKES BY FARAH OOMERBHOY - BOOK BLAST & GIVEAWAY


A fantastic adventure story that will transport you to a dazzling world of myth and magic.

16-year-old Aurora Darlington is an orphan. Mistreated by her adopted family and bullied at school, she dreams of running away and being free. But when she is kidnapped and dragged through a portal into a magical world, suddenly her old life doesn’t seem so bad. Avalonia is a dangerous land ruled by powerful mages and a cruel, selfish queen who will do anything to control all seven kingdoms—including killing anyone who stands in her way. Thrust headlong into this new, magical world, Aurora’s arrival sets plans in motion that threaten to destroy all she holds dear. With the help of a young fae, a magical pegasus, and a handsome mage, Aurora journeys across Avalonia to learn the truth about her past and unleash the power within herself. Kingdoms collide as a complicated web of political intrigue and ancient magic lead Aurora to unravel a shocking secret that will change her life forever. 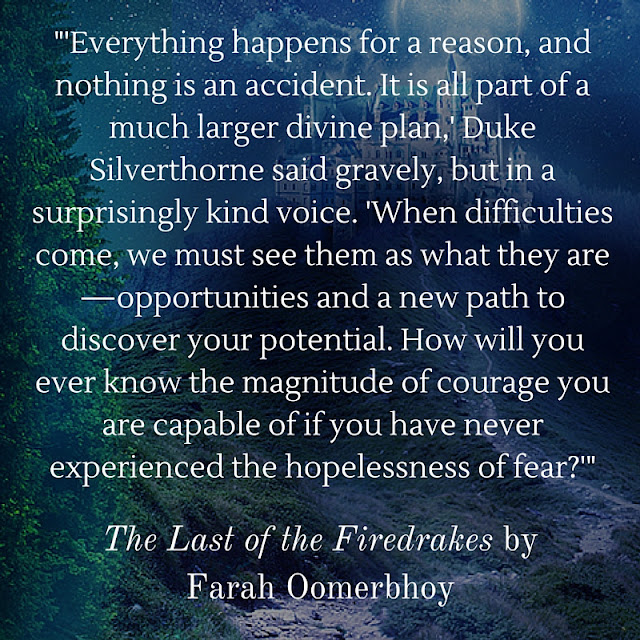 Praise for the Book

“…the narrative components echo the classics; the Academy of Magic at Evolon could be Hogwarts, while the Shadow Guards are reminiscent of Tolkien’s Ring Wraiths or Rowling’s Dementors…a beautifully drawn fantasy world.” – Kirkus Reviews
“THE LAST OF THE FIREDRAKES is a magic-filled romp that carries you back to the fantasy stories of childhood…Lovers of classic fantasy will likewise gobble down Oomerbhoy’s scrumptious story.” – Dr Vic James, author of the SLAVEDAYS trilogy
“The world building is beautiful…That really made the book more complex for me…it is the journey of discovery for Aurora and the reader that makes this an interesting story.”– Janelle Fila for Readers’ Favorite
“The Last of the Firedrakes has all the elements of popular fantasy – an orphaned princess, Magical powers, an alternate sphere with seven kingdoms, a young girl with a destiny to fulfil. They are all elements of the Narnia Chronicles, The Faraway tree, The Harry Potter series, Lord of the Rings and a bit of Enid Blyton fun.” – Mitali Parekh for Mid-Day newspaper

Farah Oomerbhoy is a young adult writer with a master’s degree in English literature from the University of Mumbai. Farah loves the fantastical and magical and often dreams of living in Narnia, Neverland, or the Enchanted Forest. Her debut novel,The Last of the Firedrakes, Book 1 of The Avalonia Chronicles started on Wattpad where it received a Watty Award in 2015 and over 1.5 million reads. Since publication, The Last of the Firedrakes has gone on to win a silver medal in IBPA’s Benjamin Franklin Awards, become a finalist in the USA Best Book Awards and become an international bestseller. Farah lives with her family in Mumbai, India where she can be found checking for magical portals in every closet.

$100 Amazon Gift Card or Paypal Cash
Ends 7/29/16
Giveaway was organized by Kathy from I Am A Reader and sponsored by the author.