I'VE SEEN MANCHESTER BY THE SEA 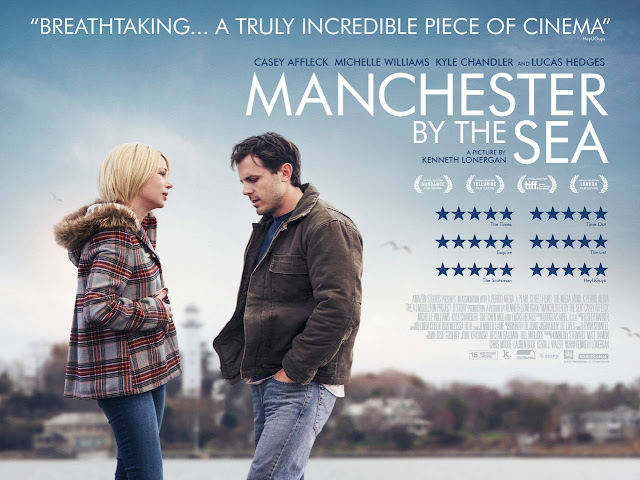 Lee Chandler is a brooding, irritable loner who works as a handyman for a Boston apartment block. One damp winter day he gets a call summoning him to his hometown, north of the city. His brother's heart has given out suddenly, and he's been named guardian to his 16-year-old nephew. As if losing his only sibling and his doubts about raising a teenager weren't enough, his return to the past re-opens an unspeakable tragedy . Throughout the movie Lee relives past memories  and the viewer discovers what caused him to leave Manchester and distance himself from everyone there (from imdb).

With six Oscar nominations and several Baftas and Golden Globes received, Manchester by the sea has been acclaimed as one of the best 2016 movies. I agree, of course. Especially after being disappointed by pluri-awarded La la Land, I can't say the same for Kenneth Lonergan' s small-budget movie.

I truly liked watching Manchester by the Sea. That’s one of those stories that stay with you for quite a while, being deeply sad and touching. Casey Affleck is a revelation to me with his moving, gripping, intense interpretation of grief and restlessness. His existence is a revelation to me, since I've never heard of him or seen him in anything else, The first time I saw him, he was  delivering thanking speeches when awarded a Golden Globe and then a Bafta as best actor in a dramatic movie. I mean, well deserved Golden Globe and BAFTA,  now I've seen him in Manchester by the Sea, but I didn't know who the guy was at the time. I will be watching the Oscars Ceremony tonight with a special eye on him and my fingers crossed.
Affleck’s interpretation of Lee Chandler in Manchester by the Sea is outstanding, out of ordinary, the performance of a lifetime. All the pain, sadness, solitude of the character are in the actor's eyes and in his posture, he never bursts into melodrama or exageration and stays true to Chandler's tormented journey. Endless grief is what is left to Lee Chandler after he has to survive the tragedy and total shipwreck of his life, endless pain is what Affleck honestly delivers  on screen. The role of such a  guilt-ridden character mustn’t have been easy to cope with.  So, kudos.

The only way Chandler has in order to survive is grief and sense of guilt is to ibernate his heart, just as he has to accept his brother Joe's body being ibernate. How can you render a man trying to ibernate his feelings, emotions, sensations? Watch Casey Affleck in this movie and you'll know.
"There's nothing there, there's nothing there", Lee stammers to Randy, his ex - wife, who is telling him that she had, has and will always have a broken heart. Hers is broken but alive, his is totally frozen.

Randy is played by an outstanding Michelle Williams.  After years Randy is reshaping her life and  is ready to give sympathy,  love and forgiveness to Lee. But he can't accept all that because he can't love nor forgive himself. Michelle Williams is among the nominees tonight as Best Supporting Actress. 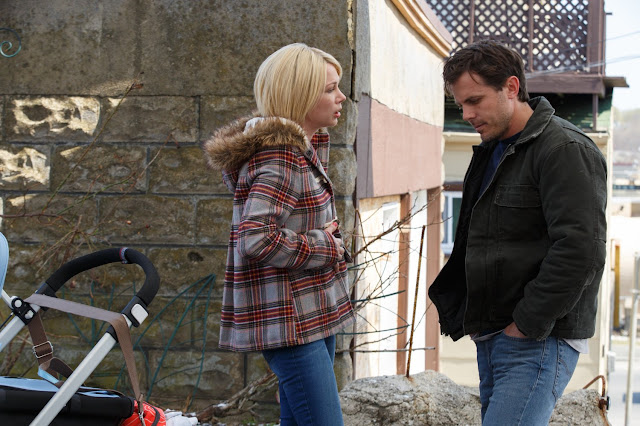 All the emotions you experience from the beginning converge and burst in a scene which takes place towards the end of the movie. It is a scene in which Lee and Randy bump into each other years after the shocking tragedy that separated them years before. I watched it forgetting to breathe from beginning to end.  Remarkable acting on both sides.

Have a look yourself!


Love and sympathy come to Lee from other people in Manchester, especially from Patrick,  his 16-year-old nephew, abandoned by his mother in his childhood, who has now just lost his father. Uncle and nephew don't always agree but it is clear they cling to each other. Lucas Hedges contributes one more outstanding performance to the movie and is among the nominees as Supporting Actor at the Oscars tonight.

There is also much love in the dark, unhappy story of Manchester by the Sea. Unsaid, confined, awkwardly expressed love, but yes, it is there. And there is beauty, too.  Beauty and love. That is enough to explain why someone like Lee Chandler goes on living in the end:  it is to atone, maybe, but also because life never stops offering him love and beauty. It is not easy to him to accept them. He accepts violence and tragedies more easily than love or forgiveness but, anyway,  they are there for him too. Stubbornly he rejects them at any offfer because he is convinced he doesn't deserve them. However, the final scene warms the viewer's heart and leaves them with some hope. Even though Lee may not be able to beat his haunting, suffocating past, he knows he is loved and needed.

Manchester by the Sea is one of the most intense movies I’ve seen  in a while.
I'll be watching the Academy Awards Ceremony tonight hoping in some more recognition.