HOW ROMANTIC IS FAR FROM THE MADDING CROWD? FROM THE BOOK TO VINTERBERG'S MOVIE (2015) 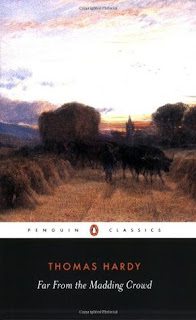 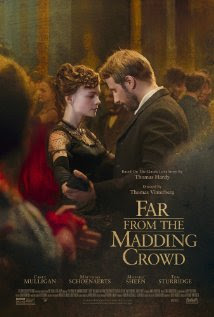 Independent and spirited Bathsheba Everdene has come to Weatherbury to take up her position as a farmer on the largest estate in the area. Her bold presence draws three very different suitors: the gentleman-farmer Boldwood, soldier-seducer Sergeant Troy and the devoted shepherd Gabriel Oak. Each, in contrasting ways, unsettles her decisions and complicates her life, and tragedy ensues, threatening the stability of the whole community. The first of his works set in Wessex, Hardy's novel of swift passion and slow courtship is imbued with his evocative descriptions of rural life and landscapes, and with unflinching honesty about sexual relationships.

‘Its very title – a quotation from Gray’s “Elegy written in a Country Churchyard” – is an ironic literary joke. Gray idealises the “noiseless” and “sequestered” calm of country life, where “sober wishes never learned to stray”; Hardy disrupts the idyll, and not just by introducing the sound and fury of an extreme plot into the pastoral world. Like Braddon and Collins, he was out to subvert his readers’ complacency’ (Lucasta Miller)

Bathsheba Everdene is the heroine and heart of this story but - as it often happens with Jane Austen’s Emma -  not a character easy to love.  She's flawed and vain, prone to make the wrong decisions and mar her life. She is a complicated young woman, almost paradoxical:  she provokes and confuses the reader as she does her suitors. She is inconstant, unsure, impulsive, inconsiderate and, in my opinion,  not very smart and very, very lucky.  She’s lucky in her misfortunes, I mean, since, in the end, she chooses safely and ends up safe. Fate is good to Bathsheba, so much more than to Tess, for instance. It is clear she has not my sympathy, isn't it? Moreover, for me it’s difficult to recognize in her the feminist icon many have in all these years. I can’t hate her though and she is extremely well-written.

Far From The Madding Crowd has been considered Hardy’s “warmest and sunniest” novels and, comparing it to Tess of The D’Urbevilles or Jude the Obscure, I can agree with that, even though only partially. The story features eroticism and tragicality, macabre and violent details and you can experience a sense of real discomfort and distress as a reader,  which is not common while coping with romance.
But here’s another controversial question: is Far From The Madding Crowd romantic at all?  If you read it properly, neither its happy  ending can really sound romantic or cheerful, only, and if you have been siding with Gabriel Oak, gratifying. What I’m trying to say is that to classify Hardy’s novel as a romance is not only simplistic but even wrong.


“They spoke very little of their mutual feelings: pretty phrases and warm attentions being probably unnecessary between such tried friends.”

The three male heroes are also quite interesting, different from one another, embodiments of different forms of love. The three of them are indispensable to feed Bathsheba’s vanity and self-conceit. Gabriel Oak, loyal and faithful, strong and honest, ready to sacrifice himself for Bathsheba’s welfare and happiness. He represents true, long-lasting, selfless love.

“What a way Oak had, she thought, of enduring things. Boldwood, who seemed so much deeper and higher and stronger in feeling than Gabriel, had not yet learnt, any more than she herself, the simple lesson which Oak showed a mastery of by every turn and look he gave—that among the multitude of interests by which he was surrounded, those which affected his personal well-being were not the most absorbing and important in his eyes. Oak meditatively looked upon the horizon of circumstances without any special regard to his own standpoint in the midst. That was how she would wish to be”


Mr Boldwood, handsome and wealthy, represents passion turned into obsession.  He wants to have, he must have Bathsheba at any cost. Frank Troy, attractive and reckless, a rogue and a soldier,  is the appeal of sex.

“Bathsheba loved Troy in the way that only self-reliant women love when they abandon their self-reliance. When a strong woman recklessly throws away her strength she is worse than a weak woman who has never any strength to throw away. One source of her inadequacy is the novelty of the occasion. She has never had practice in making the best of such a condition. Weakness is doubly weak by being new.”

I mentioned Emma by Jane Austen in the first paragraph,  while presenting Bathsheba. Fact is that, while reading Far From The Madding Crowd, Bathsheba constantly reminded me of Emma Woodhouse in her behaviour. They are both very dangerous heroines with their reckless, impulsive way of coping with life, dangerous to the ones they love or those who love them!  Gabriel Oak, older and wiser, always ready to help and reproach, silently in love, reminded me of Mr Knightley, of course. Forget rank and social conventions.

From the book to the movie 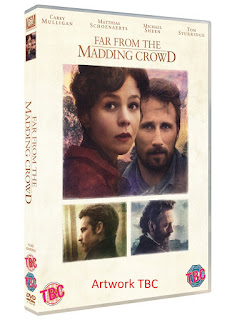 The latest adaptation of Hardy’s novel is directed by Thomas Vinterberg and  stars Carey Mulligan as Bathsheba, Matthias Schoenaerts as Gabriel Oak, Michael Sheen as Mr Boldwood and Tom Sturridge as Frank Troy.

It is visually beautiful and with a brilliant cast. It is a good movie on the whole. However, if you look for a faithful adaptation of the book, you may be disappointed. As Lucasta Miller states, Vinterberg’s interpretation of the novel “normalises” what is in reality a deeply unsettling book, and neutralises much of its power. In short, it sweeps away all the surreal, erotic charge of the novel and makes it what it is not, that is idyllic,  romantic.
There are several cuts and changes in the plot, which result in altering the nature of the story and even the psychology of the characters.  Mr Boldwood is less psychotic, Gabriel Oak is more balanced and less passionate, Frank Troy is turned into a romantic character  which he is not.

I’ve watched and re-watched the emotional happy ending, being the desperate romantic I am,  but,  I can assure you,  that has very little to do with the end in the book.

In short, did I like the movie? Yes, very much! I recommend it to you, especially if you love romance and period drama. It is a beautiful rendition of a beautiful story, with strong performances and unforgettable scenes.

The DVD is available  at  amazon.com   and it can be-preordered at amazon.co.uk (out 31st August 2015)
Posted by Maria Grazia at Friday, August 14, 2015
Email ThisBlogThis!Share to TwitterShare to FacebookShare to Pinterest
Labels: Classic literature, Classics, Costume movies, DVDs, Far From The Madding Crowd, From the book to the movie, Reviews, The Victorian Age, Thomas Hardy, Victorian Literature

I agree with you that the movie normalises both Bathsheba and Gabriel and makes them both more sympathetic, which they were not in the novel. This was the thing that bothered me most as well in this adaptation. I found the movie an average adaptation - not bad, not particularly good. I disliked the costumes as I found them not particularly faithful to the era, apart from few of them.

I don't agree much with your interpretation of the novel, as I did find Bathsheba a 'feminist' (kind of ì) figure - or at least one of Hardy's heroines in which the 'punishment' of patriarchal society is most evident. Her final marriage to Oak was a punishment, in my reading, as she didn't love him but was forced by "forces" (= Hardy's hand) to be married instead of funcioning as a single, independent woman. I personally dislike Oak because he's always on the right side and makes other feel the weight of that. A worse form of Mr Knightley.