WHY I AM NOT 'A-MUSED', OR AM I? SARAH HAWKSWOOD, ON MR ARMITAGE AND HER NEW RELEASE, "THE LORD BISHOP'S CLERK" 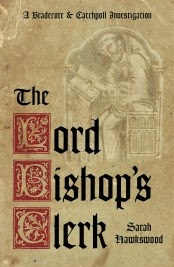 No, I am not Queen Victoria, but the question of muses is interesting. Personally, I associate them with poets of dodgy mental stability and pre-Raphaelite painters, but some people find them helpful in the creative arts. However, writers, painters, and other creative people all use bits and bobs, ‘collages’, from reality, both experience and physicality, to infuse their fiction, consciously or unconsciously. I suppose I am wary of using the same person over and over again, lest that create the same character, and from preference I would blend even physical aspects. The danger there is that you end up with a Frankenstein’s monster, badly stitched together and a bit leaky at the seams.

Having declared against muses, I am then forced to admit I took one physical form for one of my two ‘detectives’ for my 12th century Bradecote and Catchpoll murder mystery series. I had two characters in mind, one the grizzled ‘seen it all before’ Sheriff’s Serjeant, and the other a manorial lord drafted in whether he wanted it or not, initially to keep the more lordly suspects ‘happy’. I began writing the first book in 2003, and a few months later opened my newspaper to see ‘Catchpoll’ staring at me fully formed.. It was an interview with an actor about to play Titus Andronicus, and staring at me was the perfect fit for my character.
Reader, I stole him.

From that moment on I could visualise Catchpoll in every gesture, grimace, every sucking of teeth. I knew his voice, the way he screwed up his eyes. I gave him a character that was a ‘collage’, but I could see him clearly. Now, it has been remarked that reading my work is like watching a television drama or film. Perhaps that is a consequence of creating a world and being ‘in it’ as I write. It does mean ‘seeing’ characters helps. It also meant that my Under Sheriff was a bit ‘thin’ on first draft.

I had him as early thirties, tall, dark, on the lean side. He has an over developed sense of guilt, a good streak of decency, and an occasional outburst of potentially dangerous anger if really riled. When I compared him with Catchpoll, he was lacking. However, I hoped that I would find more to him as the series progressed, which I did. I began book two, and then, in the autumn of 2004, the BBC aired a drama series, a rather overlooked 19th century classic. I thought it would be an enjoyable way to while away a Sunday evening, and despite me yelling at the screen through the final station scene ‘No! You’ll have the constable arresting you for that in public’, I loved North & South. I never thought at the outset it would give me the sinew and muscle to cover the ‘bones’ of  Hugh Bradecote.

Mr Richard Armitage is a good looking actor, let us take that as read. What grabbed me by the throat was that he is a fantastic actor, full stop ( or ‘period’). The ‘look back at me’ scene simply stunned me. Here was a man giving us pain and confusion and loss, all through the eyes and the most nuanced facial expression. He was tall, check, dark, check, and inclined to the lean. Bingo! I went back to The Lord Bishop’s Clerk, and gave Bradecote the baritone voice, the nose, the frowns, the rubbing of the chin when pondering, the striding walk. That gave me the prompts to deepen his emotions, make him react in certain ways. All I can say is, ‘thank you, Mr Armitage’.
However, Bradecote is not an ‘Armitage clone’. I would say he is about 80% ‘Armitagious’, and that is, I think, a healthy percentage. If one wanted a muse, the gentleman would be very good, because of the ‘onion layers’ he gives to the characters he portrays. Have I used elements of him elsewhere? You bet I have.

I also write ‘trad’ Regency in the Heyer tradition - which is also very ‘creation of a world’ dependent, although since they do not include the ripping of bodices, the chances of them seeing a print run are pretty thin. These are not a series, so the ‘male lead’ really cannot be the same man over and over again. Thus there are varying degrees of ‘Armitagiousness’ in them, to the point where some you would not recognise, although I have used, in my own head, an expression, a bearing, and nearly always a baritone rather than tenor voice. One lead has, I hold my hand up here, a close resemblance in his emotions to Guy of Gisborne in the Armitage incarnation - frequently frustrated, confused, angry and acting like a thwarted infant, bless him, and yet I would deny that the actor is my muse.

Why? Is it just denial on my part? I suppose it is because in my mind there is a relationship between muse and artist. All I have done is taken aspects, even when by the sack load, from his portrayals of characters. I do not know the man, nor he me. To claim him as my muse would be, to me, unseemly, too personal. To quote from North & South ‘I do not want to possess you.’  I do not possess one iota of the real him. What he has given, he has given to an audience of thousands, millions even, and it is up to us what we take from those performances. If he gave less nuance, less depth, for all the ‘perfect imperfection’ of his looks, I doubt I would borrow much of him, because writers observe and then use, not just features but feelings and emotions. If he were a good looking cardboard cutout, he would be no use to me at all.

There is a final muse problem. If one has a muse it can become a bit obsessional, and also very difficult to paint, in word or picture, anyone else. It constricts. I want to be free ( but may I take ‘Mr Armitage’ with me on some journeys, please?)

The Lord Bishop’s Clerk by Sarah Hawkswood is published by The Mystery Press, November 2014.

Excellent! I am looking forward to reading this Sarah.

(Thanks Maria for posting).

Congratulations on the book. As to rejecting the "muse," -- hmmm. I guess one meaning of have a "muse" is that you write stories about a permutation of that person whom you find won't leave your thoughts or who is particularly striking to you for one reason or another. Another meaning, however, is that that person inspires you in your work. Armitage is not my muse in the first sense; when I write stories I am not writing about him and none of the characters even vaguely resemble him. But at the same time I wouldn't be writing without him. He is thus very much my muse in the second sense.

I'm very much looking forward to reading your story, Sarah.
I love mysteries, and knowing that Richard Armitage inspired your hero is an excellent inducement!

It is sometimes difficult to separate the person from the performer, as acting requires one to draw from one's own self. But there can be no doubt that Mr. Armitage is a brilliant player and the source of much inspiration. I am eager to read The Lord Bishop's Clerk for its own sake, knowing Sarah to be a gifted writer with a commitment to authenticity. I am also looking forward to finding those traces of Armitageness in Hugh Bradecote!