NOT ONLY PERIOD. MOVIES I'VE WATCHED THESE DAYS: THE DECOY BRIDE AND NEVER LET ME GO 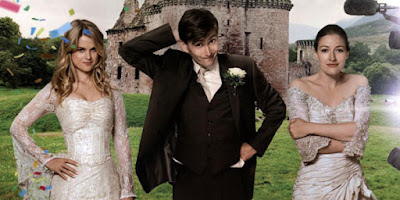 After lovelorn Katie (Kelly MacDonald)  is dumped at the altar, she returns home to her windswept Scottish island, thinking she will never walk down the aisle. Little does she know that Hollywood superstar Lara (Alice Eve) has chosen the island as the secret venue for her marriage to her gorgeous boyfriend James (David Tennant).


But with the paparazzi hard on her tail, Lara needs to throw them off the scent. Katie agrees to dress in white and walk down the aisle as Lara’s ‘decoy bride.’ Wedding bells ring, love blooms, but who ends up happily ever after?


The Decoy Bride (2011) is  a funny rom-com I honestly saw just because of David Tennant . I think he is a great actor, brilliant both in comedy and serious drama. I loved him as Hamlet (2010) and as Benedick (2011) which are his latest Shakespearian performances, never saw him as Doctor Who,  and really liked him in Single Father (BBC 2011). I don't know why I wanted to see this rather silly and totally predictable movie, even after reading the rather cliched plot, watching  the ratings and having a look at  a few negative critic reviews. I'm really unpredictable. A mystery to myself. Because of course, I was rather disappointed after watching it. Even David Tennant himself seemed to me  quite out of place. Do you want to see it anyway? You must be ready to cope with Scottish accent and English humour, highly improbable events and impractical solutions, a gorgeous Hollywood star left by the groom at the altar for a  Bridget-Jones-type ordinary girl definitely unfortunate in love until that moment, a shallow and  not-very-talented writer experiencing a block.... Hence, no surprises at all. Except for one extremely amazing element which must be mentioned and can be the reason why anybody should at least have a look at this DVD: the fictional Scottish island of Hegg, where all the action takes place,  is stunning. Breathtaking. (Read more about The Decoy Bride at imdb, watch it at Amazon.com, get the DVD region 2 )

This is one of the saddest, most nightmarish stories I've ever watched. Excellent acting and beautiful locations, this  film is an adaptation of Kazuo Ishiguro's novel of the same title. You follow Ruth, Kathy and Tommy in their apparently idyllic childhood in their wonderful college in the countryside until they one they listen to one of the most terrible lessons by one of their teachers,  Miss Lucy :

She will soon be sent away because totally unsuitable for the task she was expected to fulfil. She dared  reveal those creatures the horrible truth about the purpose of their lives. You are there as shocked as those children and go on all the movie through hoping there may be an escape for those children from their unlucky fate. Touching and thought-provoking but so dark. As I said at the beginning it is nightmarish, but, somehow,  it is lyrical and romantic at the same time. When I discovered what it was  about, I had promised myself I wouldn't see it. Instead,  I couldn't resist when I bumped into it on a satellite channel on TV while drinking my after-lunch coffee last Friday.  I couldn't resist and I started watching,  then I couldn't stop. With an indescribable pain in my heart I saw it till its dreadful end.
Keira Knightley and Carey Mulligan are Ruth and Kathy. They are on set together again after their first experience as Elizabeth and Kitty Bennet in Pride and Prejudice 2005. Miss Lucy is Sally Hawkins (Anne Elliot in Persuasion 2007) and the headmistress at  Halisham, Miss Emily,  is Charlotte Rampling.   Sweet Tommy as an  adult is Andrew Garfield (Social Network)

I am definitely glad I finally came to see Never Let Me Go. And I particularly liked what Kathy said at the end of the movie, which may sound cryptic to you if you haven't read the novel or watched the film:

"What I'm not sure about, is if our lives have been so different from the lives of the people we save. We all complete. Maybe none of us really understand what we've lived through, or feel we've had enough time".

Read more about this movie:  Never Let Me Go at imdb
Buy the DVD  at amazon.com

Sorry Decoy Bride was a bust--that is definitely the kind of movie I would watch on an airplane, and sometimes rom-coms are just the ticket, but it sounds like this was just not worth it.

I want to read and watch Never Let Me Go, but I will have to brace myself for a gut-wrenching experience.

>As I said at the beginning it is nightmarish, but, somehow, it is lyrical and romantic at the same time.

That actually sounds terrific...if I'm in the right mood!

Thanks @JaneGS for your comment. I love beautiful stories even when they are sad but this one (Never Let Me Go) was really one of the saddest I've ever watched. However, I'm grateful to ...Chance for seeing it.
The Decoy Bride has stunning locations. You can give it a chance during your next flight to ... the UK?
Big hug. MG

Not a romcom fan. WHAT??? Not romantic?? Well, this seems to be worth the location shooting. About GB and Ireland, I'm romantic! DT. Well. Not. :D

You have made me curious about Never Let Me Go. I want to see it. I loved the movie The Remains of the Day, also based on a novel by Kazuo Ishiguro. Is it the same kind of sadness?

@fitzg Not romantic? But romantic about GB and Ireland? How's that? However, I've read many positive reviews of The Decoy Bride so you maybe like its surreal romanticism. Scottish Ireland may be very attractive! ;-)
@Monica
The Remains of the Day was melancholic, not tragic. Sad not tragic. This film is ... tragicly sad. But I liked it. I can't tell you more. I really don't want to give away many spoilers.

Thanks to both for your comments and have a great weekend! MG