DESY GIUFFRE' - A YOUNG ITALIAN WRITER IN LOVE WITH A LITERARY ROMANTIC HERO - I AM HEATHCLIFF, BOOK PRESENTATION, GIVEAWAY & POLL 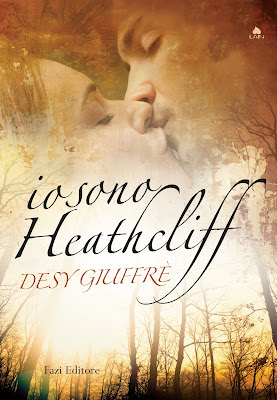 I met Desy Giuffrè on Facebook as we are both members of Bronte fan groups and I was immediately curious to discover more about the book she was launching: I am Heathcliff, a modern sequel of Emily Bronte’s Wuthering Heights, a paranormal romance.
I asked her to present her first published book, IO SONO HEATHCLIFF (I AM HEATHCLIFF),  to you readers of FLY HIGH - though it is an  Italian book - and to explain the reasons of her fascination for Heathcliff and Catherine. She accepted to do it  and her publishers, Fazi  Editore,  have even granted you  (even if  NOT living in Italy) the chance  to win a free  copy.  To be entered in the giveaway contest,  leave your comment,  add your e-mail address and choose  your favourite Heathcliff in the poll below.   The winner will be announced on  28 April. NB. THE BOOK IS IN ITALIAN

Why Wuthering Heights? Why writing  a sequel, a  paranormal sequel, of a literary classic that has already in itself an inexhaustible fire of emotions?

Well, the protagonists of Wuthering Heights can breathe immortality. And that is why  I chose them as a source of inspiration for a new story, a new love story which turns  life upside down.  Io sono Heathcliff  changes its atmosphere respect to the original novel, moving  from the  past to the  present, which is chaotic , carved on rocks,  spread in the heath and  blown in the wind which sings the eternal love between Cathy and Heathcliff.
A love that hurts, that is beautiful and ruthless,  for his beloved Cathy Heathcliff is  a root  and , though an  unhealthy  one,  this root drags  something pure and precious. Not a villain, but a magnificently flawed man  in its stark reality. It is from this feeling, which is unique and memorable, and its shocking twists and turns that my story begins   and comes to life in the protagonists of  Io sono  Heathcliff:  Elena Ray and Damian Ludeschi.

What about the plot?

Elena Ray is a spoiled rich girl, who hides herself  behind her apparent superficiality, her being a shallow teenager.
Damian Ludeschi is a charming  thief,  he loves  danger and is a romantic reame. Unable to accept his father's quitting him he panders  the wishes of a violent and power-hungry uncle. Their lives seem to have nothing in common, if not for an ancient curse that binds both to the old estate , known as Wuthering Heights,  and their historical owners: Catherine Earnshaw and Heathcliff.
We have learned to know and to love them in the timeless classic Wuthering Heights, which  has made many hearts beat, and now we find them as spirits willing to do anything, even to appropriate the lives of two young players just to have a second chance to live their unfortunate and sad love.
That will decide their  fate  but the secret is guarded in the epitaph on their  tombs, which gives life to this  fantasy sequel  "The rocks will be keepers. The heath prison. As long as a Daughter of the Blood does not come to restore the rooms to their bones. And the earth will not cry over their names. "

Poll - Wuthering Heights has had many film and TV adaptations so far. Which one/s have you seen?
Which is your favourite version? Choose your the best Heathcliff .

What if my favourite Heathcliff were Robert Cavanah? (Just jesting!)

Anyway I oly popped in to say hallo, not to enter the Giveaway: I've already read this delightful YA spin-off! ;)

Amazing giveaway and it seems amazing book!
So I'm in! :D

While I can't say I'm a huge Bronte fan, there is something about Heathcliff that I find so "ugh" I can't put words to it!

My pick for Heathcliff is Tom Hardy

I actually never liked Wuthering Heights, but I am still trying to understand why others love this book so much and especially the relationship between Catherine an Heathcliff. A friend once told me: "But it is written so well...", but I seem only to be able to focus on the cruelty described. I will read it again sometime. In the meantime I would like to read this Italian book...

Of the four WH adaptations mentioned I only saw the one with Tom Hardy as Heathcliff and I can't say I liked it...
Did anyone see the new version?

I didn't, Monica. I only saw the other three adaptations. But I'm curious to see that one too.

What a wonderful chance! I'm Italian,I live in Italy.. so I try :)

My favourite Heathcliff is Tom Hardy, of course ^^

however, it seems interesting.