BBC BIRDSONG - TO LOVE AND TO BE LOVED. NOTHING MORE. 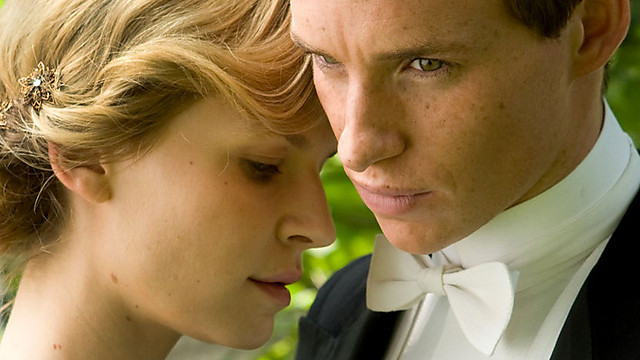 BBC two-part serial Birdsong , adapted from a novel by Sebastian Faulks (1993), is a gripping, touching love story set in the years of the First World War. But it is much more than a classic romance.  It is an epic tale of great passions and extraordinary events experienced by ordinary men and women who were called  to become heroes and heroines. There are so many layers to this wonderful story and I'm so happy I could finally watch it! It is indeed one of the best TV adaptations I've ever seen.


The action  moves between 1910 and 1916, telling the story of Stephen Wraysford (Eddie Redmayne) , a young Englishman who arrives in Amiens in Northern France to stay with the Azaire family and falls desperately in love with Isabelle Azaire (Clémence Poésy). They begin an illicit and all-consuming affair, but the relationship falters. Years later, Stephen finds himself serving on the Western Front in the very area where he experienced his great love. As he battles amidst the blood and gore of the trenches he meets Jack Firebrace (Joseph Mawle), a tunneller who unexpectedly helps him endure the ravages of war and enables him to make peace with his feelings for Isabelle.

The First World War was a shocking event - when is war not? - in which a million British soldiers died. Only in the attack at La Somme, France, which is fictionalised  in Birdsong, the British had 60, 000 casualties in only one day. That was the war which transformed men into numbers. It was an uprooting, devastating violent storm that cancelled an entire generation of proud young men and left the few survivors, haunted , guilt - ridden, torn and compromised. Shell-shocked is the term usually used.

The tragedy of the anonimity of all those broken young lives is part of the tragedy narrated by Faulks in this incredibly beautiful story. As Faulks himself, stated: Any fictional character placed in these dehumanizing conditions  would find his individual qualities irrelevant.
So he decided his vision of the war had to be through the eyes of ordinary,  flawed, apparently fragile men,  like the protagonist lieutenant Stephen Wraysford or humble tunneller Jack Firebrace. If they have a quality, it is not really heroism: it is an ability to endure the hardships, the degradation, the appalling absurdity of the reality they have to cope with.
The series and the book are different in many ways. The TV serial has somehow softened the tragicality of the original novel  and condensed the story. There are changes in the plot, too. However, this series is very very good period drama as the book is a brilliant historical novel.

This story is not only a romance but love is the driving force and the only strength, the only pretext given to those ordinary men  in the trenches or in the tunnels underground to go on living. Jack Firebrace's legacy to Stephen is : "Nothing more, sir. To love and to be loved".
Stephen Wraysford is haunted by memories of his lost love whilst in the trenches: Isabelle. Theirs was a great passion started at first sight which led the married woman to accept first a clandestine affair with young Stephen, then to leave her husband and her house for an uncertain future with the man she loved.


It's difficult in any area to translate something from a book to a film - they're both different. But it's particularly tricky with sex. Eddie Redmayne, Clémence Poésy and I spent long hours talking about it and we tried to be very clear about exactly what was going to happen in each moment - so that the build-up of sexual tension was done in a very precise and detailed way. What we tried to do was to make the experience of the audience watching match the intensity of the experience of reading the book.


The dramatic contrast between the muddy, nightmarish reality of the trench warfare and the idyllic beauty of pre-war France was conveyed and highlighted by continuous shifts from  the grey tones of the war setting and  the "painterly" photography (as Ben Stephenson, BBC controller, defined it in an interview). Referring to that the director said:


I wanted pre-war France to feel like a dream: crystal clear yet mysterious. The director of photography, Julian Court and I found a touchstone in a quote from the pre-RaphaeliteEdward Burne-Jones, who said a painting should be "a beautiful, romantic dream of something that never was, never will be - in a light better than any light that ever shone - in a land no-one can define or remember, only desire... "

Sebastian Faulks about his Birdsong

(Clip from Faulks on Fiction, episode 1)
Posted by Maria Grazia at Wednesday, February 15, 2012
Email ThisBlogThis!Share to TwitterShare to FacebookShare to Pinterest

I'd been waiting for quite a while to see this adaptation, especially because I'm very fond of Faulks' book. And I was disappointed. The photography is excellent, beautifully shot scenes, but quite big chunks of the book has been left out, a few other parts/scenes have been changed quite a bit and I found it annoying. Not keen on the choice of the lead actors, especially Stephen, a blue-eyed young boy who is exactly what Falks did not want his character to be. Loved him in My Week with Marilyn but not here. What a pity!
Ciao. A.x

@lunarossa
We share so much, A. that I hope you can forgive me for liking this serial ;-) I'm sure it is because you read the book and loved it, while I have it still on my TBRS list!
Hugs. Have a nice day! MG

-__- I'm sorry it is mariam. I can't read your review before watching it, I hate spoilers XD
But i'm glad to see that you liked it too XD