When I heard Michael Fassbender won the Best Actor award at the Evening Standard awards last night, I gave a quiet cheer – but wasn’t the least bit surprised.
Last week, via Twitter, Maria heard about my current obsession and offered me the chance to blog about the actor and his roles.
Now, I'll admit that over the last few months, I've slowly developed a thing for Mr Fassbender. He first came to my attention a couple of years ago in The Devil’s Whore, the brilliant English Civil War drama starring Angela Riseborough and John Simm. However, I’ll admit I didn’t really take much notice of him until last September when we went to see the new movie of Jane Eyre. 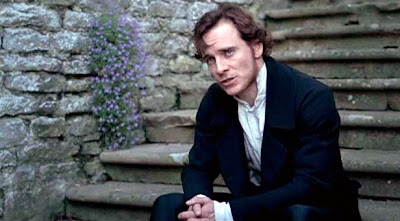 Some would say there have been far too many Jane Eyres but I have to say, this was one of my favourite adaptations. Here was a Rochester I could really believe in. Attractive and charismatic (but not improbably handsome) - and above all, dangerous. An essentially good man, but one with a tortured soul who has made a mistake or dare I say it, done some very bad things - whatever your take on Rochester is. 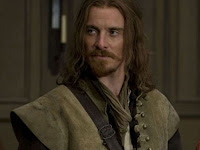 Michael Fassbender has two films out at the moment, Shame and A Dangerous Method, so I’ve been seeing him around the Internet and media a lot. However, my interest rose to a new level after I came across a photo of him as Azazeal in an old Sky series called Hex.
I’ve recently finished writing a book – I can’t tell you when it will appear yet – but I know this much: Fassbender as Azazeal is the hero. He is Jago... my edgy, tormented and jaded hero. I hope you'll love him if/when you ever get to read about him.
Mind you, having watched the first series of Hex, I don’t recommend you race off to Amazon to buy the DVD. It’s mildly entertaining at best, and only just worth it to watch Mr F getting up to his devilish tricks.

Shame is a different matter. I have to say it is the best film I’ve seen in a long time. It explores the downward spiral of Brandon, a New York sex addict. Normally I hear about ‘sex addicts’ and roll my eyes. It hardly seems like the worst affliction but in Shame, Brandon takes suffering to new lows. Unable to form proper relationships, he is compelled into one seedy encounter after another, never finding solace or gratification. His addiction affects his work life and most of all, his troubled relationship with his needy sister, Sissy (Carey Mulligan) with tragic consequences.
It’s an explicit film, and maybe a little shocking but it's also serious, bleakly beautiful, uncomfortable, thought-provoking and most unexpectedly moving.
I haven't stopped thinking about still. Do go and catch it if you can, though it's coming to the end of its run. Michael Fassbender is astonishing in it and deserves his BAFTA nomination.


I think I may have found a new muse!
Phillipa Ashley

Phillipa Ashley loves writing lively, sexy, funny romantic fiction. After studying English Language and Literature at Oxford University, she worked as a copywriter and journalist. Her first novel, Decent Exposure – titled DATING MR DECEMBER for the US – won the Romantic Novelists Association New Writers Award. In 2009, it was filmed as a Lifetime TV movie called 12 Men of Christmas starring Kristin Chenoweth and Josh Hopkins. She lives in an English village with her husband and daughter. To know more and get in touch Visit Phillipa Ashley's Blog.
Posted by Maria Grazia at Wednesday, February 08, 2012
Email ThisBlogThis!Share to TwitterShare to FacebookShare to Pinterest
Labels: Guest posts, Michael Fassbender, Movies

Wow, Maria, thank you for indulging me and having me on Fly High. Hope you enjoyed the post.

Of course, I did, Phillipa! Thanks a lot for sharing with us here on FLY HIGH! I forgot to ask you...What about lovely RA?

I haven't abandoned him but he's been the inspiration for four heroes in my novels... I have to try and break free, lol. This time, I conjured 'Jago' from my imagination and just happened to come across MF.

I was also v upset at the way Spooks ended; a triumph of plot over character. Big thumbs down.

@Phillipa
You're right but he was soooo good at making that happen. It was not easy to play to deconstruct and unroot a character he had so thoroughly built and brought to life. I loved Lucas North and hated what they did of him. But I admired RA greatly for what he achieved with his detailed acting in series 9.
But... aren't we supposed to praise Mr Fassbender here? LOL :D
I loved his Mr Rochester!

RE Rochester. Did you notice a moment in JE where he almost looks as if he might hurt Jane physically? I think it's after she rejects him. I dimly recall a John Sutherland essay called 'Can Jane Eyre be happy?' I think it implied that there was a hint of Bluebeard in Rochester - and I wonder if the actor/director was also hinting at this edge of danger and ambiguity that surrounds Rochester.

Please don't hate me, Toby Stephens fans, I think Toby's a great actor but I didn't feel he fitted *my* vision of Rochester I found him a liitle too urbane.

That was my favourite moment in latest JE.
"I could bend you with my finger and my thumb, a mere reed to feel in my hands. But whatever I do of this cage, I cannot get at you"
How passionate Mr Fassbender was in that scene.

Great interview, Phillipa - and I completely agree about MF. Gorgeous bloke, brilliant actor! Having had the pleasure of reading your latest ms, he is my idea of Jago too ;0)

It's most helpful to have more than one muse in case one goes on holiday. :)

@bccmee
On a veeery looong "holiday" in New Zealand? :-)
Thanks for your comment, b.!

You're a woman of great taste, Miss Phillipa! I started watching Jane Eyre on a flight to and from Miami and both times the entertainment systems broke down. So frustrating.

Mmmmm...may have to watch Jane Eyre again after seeing MF sitting on that step with the blue flowers in the wall. Sigh!

ARghh, Deb. What a pain!

Jenny - you know the *most* annoying thing. We happened to visit Haddon Hall (Thornfield)a few years ago during the filming of JE - back then I really had no idea who MF was and good job, as we called in on the one day the crew was taking a break. But the room was set up as Rochester's study, just as it is in the film when he has his cosy chats with Jane in front of the fire. So MF's bottom had been in those very chairs. Hmm.

I remembered I postedf some photos of the set on Facebook: