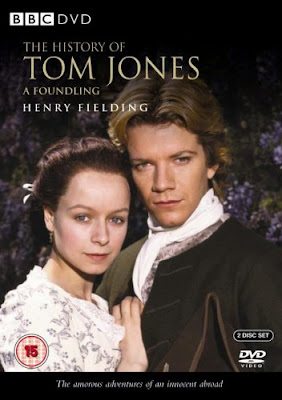 Never watching a classic period drama was more amusing. This one was brilliant. It was broadcast in 1997 first time and it is now available on DVD at a very cheap price. It is an excellent BBC 6-hours' costume drama. I simply loved watching it at the weekend. I  had added it to my TBS list after watching Faulks on Fiction in April.
The History of Tom Jones, A Foundling  (1749) is Henry Fielding's masterpiece,  which I had to read  - well, to study -  for  my English Literature Course at University when I was in my first year. I must admit I didn't have as much fun while reading it at that time.  But we grow-up, don't we? I must reread it and give Fielding's great humour another chance. It is also one of the 18th century novels I have very rarely used in my lessons. I have to correct that too: Fielding must be read. He is too clever. Do you remember the scene from "Becoming Jane" in which a fictional Tom Lefroy (James MacAvoy) suggests a fictional Jane Austen (Anne Hathaway) to read  a book of an extraordinary young man to widen her horizons and write fiction with as much knowledge of the world as a masculine writer?  He  is  in fact  suggesting her to read Fielding's Tom Jones. 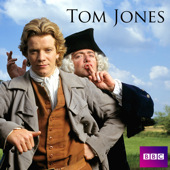 Tom Jones is a very funny and playful novel, whose atmosphere is very different from the climate of moral repression that dominates many novels of the 19th century. In his nine years of writing for the theatre, Fielding acquired considerable skill, and much of his humour comes from his ability to handle the stock situations of stage comedy.
The same impressions I got from the direction of this great series: it was like watching a very good staging of an incredibly funny romp.
Another of the peculiarities of this novel , the narrator that often  intrudes in the narration interrupting the flow of the events, has its parallel in the TV drama, which proposes the narrator as one of the characters. He is present on the scene which he decides to describe and comment: an intruding figure just like his equivalent in the book.
The plot
The protagonist of this story, Tom (Max Beesley) , is a generous creature, full of vital energy and impulses; he is a foundling and has been adopted by a virtuous gentleman, Mr Allworthy (Benjamin Whithrow). He grows up with Mr Allworthy's sister, who loves Tom dearly, and Blifil (James D'Arcy) her son who has to become Tom's antagonist. Tom falls in love with Sophia (Samantha Morton), the daughter of his rich neighbour, the fox-hunting, super- hilarious rich neighbour Squire Western. She returns his love, notwithstanding the opposition of her father, who is ambitious and wants secure the marriage of Sophia with Blifil, so that the estates can be joined.
Unfortunately Blifil is jealous and terribly greedy and he ruins Tom's reputation with his benefactor, Mr Allworthy. Tom is turned out of the house and sets out for Bristol and then for London. His journey will be full of picaresque adventures and temptations.
At the same time Sophia, to escape a forced marriage with Blifil, a man she hates, runs away from home.

Finally all the main characters end up in London. Tom discovers the secret of his birth and of Blifil's villainy.

Tom is a picaresque hero who tries to find his way in a chaotic world. Tom may not be devout but he has others not less surprising qualities: he is generous, compassionate, good-hearted but he seldom thinks before he acts. He is too chivalrous to turn down the advances of a woman, he is too honorouble to stand down from a fight, he is too polite to say no to a second bottle of wine. 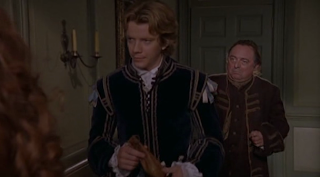 Tom's sense of right and wrong does not come from many books but it's purely instinctive. Fielding himself called his hero a rogue, but he is a rogue we would all quite like to be.
In the course of the novel, Tom discovers that he only is responsible for what happens to him, "..I am myself the cause of all my misery..."  You can forgive a man for fornication and drunkeness when he is prepared to give the last coins in his purse to a family in need. Tom Jones was a hero for the way that his good-heartedness exposed the hyposcrisy that surrounded him. Fielding really believed that he genuinely wrote a morality tale. Just that his morality was more challenging and, certainly, a lot  more fun that anything  readers had encountered before. Henry Fielding believed his book was moral, only not in an orthodox or pious way! (from my previos post on Faulks on Fiction - The Hero)
What I particularly like both in Fielding's novel and in the TV series is the attempt to break down numerous boundaries. For instance, Fielding cannot decide whether his novel is a "philosophical History," a "Romance," or an "epi-comic prosaic poem." Yet, through these confounded musings, Fielding subtly suggests that cataloguing fiction is silly, and that he would rather think of himself as "the founder of a new Province of Writing." The same happen for the TV series: it is comedy, adventure, romance, good Georgian costume drama, all in one.
Another example of broken stereotypes is that these characters, Fielding's characters cannot be distinguished by "masculine" or "feminine" traits: in this story both men and women fight and cry. And this is something extremely modern.
Warmly recommended to all period drama lovers. Back to reading Fielding, now!
Tom Jones, A Foundling at Imdb
DVD on amazon.co.uk
DVD at BBC SHOP online
Posted by Maria Grazia at Thursday, November 03, 2011
Email ThisBlogThis!Share to TwitterShare to FacebookShare to Pinterest
Labels: BBC Drama, Classic literature, Costume drama, Henry Fielding, The 18th century

I loved it!very very funny...the novel was extraordinary too!i read it thanks to jane austen!

Ah! I somehow managed to avoid reading Tom Jones when I was in college. I didn't find it appealing then. But your review of both the movie and book make me want to try it. I feel like I'd be missing out on something good if I don't pick this one up!

So glad you are giving this brilliant miniseries some publicity. It is AWESOME! Funny, bawdy and highly entertaining.

I tried to read the book after seeing this but then I got the joke about Fielding the narrator getting cut off after going on and on and on...I'll have to try it again sometime. But I never have trouble watching this one!

Glad to find others who like me enjoyed this drama very much, @Alessia and @Jenny!
And @Risa, what Jenny says just reminded what made the book so little fun: the narrator's long comments. But as I wrote I want to give Fielding another chance!
Thanks to the three of you for your comments.

The 1960s film of Tom Jones was classic - young Albert Finney. Whatever one thinks of fox-hunting, that scene was outstanding; as was the dining a deux scene. It must be availble on DVD!
fitzg

Thanks for your suggestion @fitzg! Happy Friday :-)

I loved Tom Jones when I read it back in college! I will definitely look for this adaptation.

I loved the scene where the young Sophia calls Tom 'Mr Jones' despite their young ages.