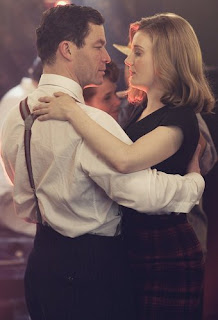 Don't ask me whether it is or not an imitation of Mad Men, nor if it is better or worse. I haven't seen the American series - I hardly ever watch American series - and I just know that this British 6-part drama is set in the same years as that American show. What I can  tell you is that I'm glad I managed to see THE HOUR and that it  doesn't look like anything I've already seen.
THE HOUR was broadcast on BBC2 between July and August (I was in England and bumped on a TV trailer by chance) and on BBC America in August last summer.
I don't think it is perfect and actually got into it little by little after mildly liking the slow opening episode. But in the end, I found it  intriguing and quite good on the whole.

Impossible not to appreciate the brilliant cast crowded with familiar faces and talented actors: 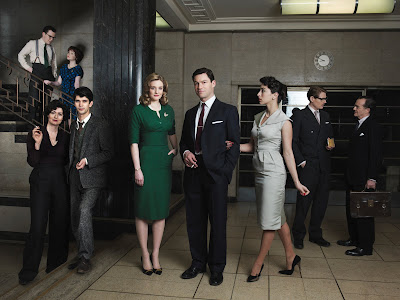 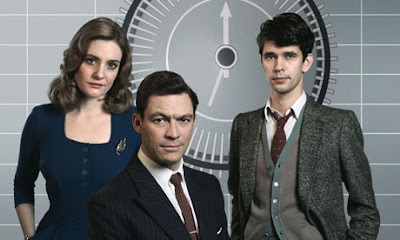 Bel and Freddie have been best friends for long, they are soulmates, they are "sort of" lovers. Probably Freddie declared his love to her in the past (so Ben Winshaw states in one of his interviews for the launch of the series) , but he is more in love with his job than with any possible woman, so their relationship goes on with ups and downs and it results as quite ambiguous. However, it is undeniably there, deep and magnetic. Bel is the centre of the Freddie's life and he knows he can rely on her, always. Even when she is engaged in a passionate love affair with Hector, who is married , ambitious and... a womanizer. Freddie doesn't seem to mind that too much as long as he can obtain Bel's attention, care, and sympathy. 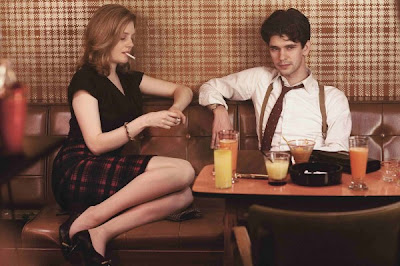 Bel is a strong and  intelligent woman in career. She's so proud of what she's got to. She's the editor and producer of The Hour a weekly BBC news programme and manages the editorial unit  and  the troupe of the programme with great enthusiasm and has the illusion nothing is unreachable to her will. But she will be disillusioned: the world is run by men and women are still quite far from enjoying the same freedom and the same rights. She will realize that when she starts having an affair with Hector, a married man.
Theirs is not simply a love triangle since it is based not only on love but also on  friendship and ambition .
Anyway,  this is only part of the storyline of this gripping series. There is a mystery to be solved, two connected cases,  a murder and a suicide,  which directly involve one of Freddie Lyon's best friends, Ruth Elm. 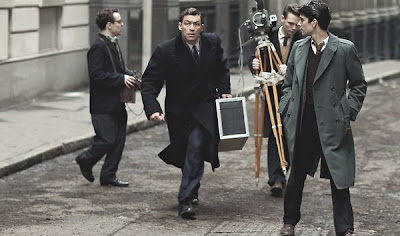 This series is in fact mainly a behind-the-scenes drama and espionage thriller set in Cold War-era England . The private lives of the main charcters and their complicated relationships are told on the background of the international critical situation of those years (the story starts in 1956). The most interesting aspect analysed is their difficult task of avoiding censorship, of defying the insitutions in order to inform the audience about crucial truths, their challenge to the powers in order to be coherent and loyal to their profession and to their friends.
My favourite character 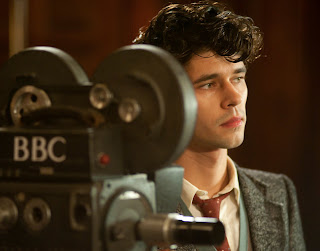 My favourite characters is Freddie, apparently so fragile, but  so brave, stubborn, loyal, smart and in his own very peculiar way so reliable at the same time.  A brilliant journalist, for whom safety comes only second to the revelation of the truth, he doesn't surrender until the truth about his friend Ruth's apparent suicide is revealed.
A lovely scene

A scene in which Hector (Dominic West) practically helps Freddie (Ben Winshaw) to dress up for a high society dinner. The two are rival in love, they compete for Bel's  (Romola Garai)  love,  but they've started  appreciating each other as colleagues at The Hour.
You can see this series on DVD ,  on Amazon.com as an instant video and on Youtube (with Spanish subtitles and if you are patient enough).
Posted by Maria Grazia at Tuesday, November 29, 2011
Email ThisBlogThis!Share to TwitterShare to FacebookShare to Pinterest
Labels: BBC Drama, Period Drama

This looks awesome Maria Grazia. I'll have to figure out how to get my hands on it!

Thanks for the heads up!

Watching it as well, MG... really enthralling and gripping. Like it a lot and made by Kudos, who did Spooks.

@Jenny Allworthy
I hope you can find it. It's a very good series with great actors (There's also Mr Hale! Here too Tim Pigott-Smith plays a father. Excellent performance... and Juliet Stevenson is great as his wife)

@Prue Batten
Yes! I've read that. Glad you like it too. It took me three Sunday ironing sessions to watch it. But it was worth it!
What about Spooks 10? Finished?

Glad you liked it, MG. I thought it was brilliant although I had some problems to get into it at the beginning too. I don't know what it has been compared to Mad Men. Absolutely no resemblance at all. Ciao. A.x

@lunarossa
Ciao, A.!
I simply read some reviews before watching it and almost all of them mentioned the American series. I haven't seen it but my impression is that they only share the setting in time. Am I wrong?
Hugs. MG

I'm so busy this period, but I'm adding it to my wishlist!!!!
Thanks for your advice, Maria Grazia.

I totally going to watch this episode!

@maribea
Busy? don't mention that to me, MB! But I've found a way to see my favourite period dramas without wasting too much time, have you read? :-)