A WALK TO REMEMBER. WHEN LIFE SURPASSES FAIRY-TALES 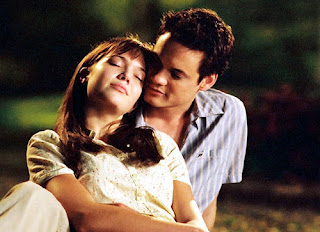 You know,  in my job I usually suggest and recommend films, series, books  to my students. They are usually somehow connected to our syllabus or, anyway, to English Literature or History. This time they recommended me a film, a movie they love and wanted me to see. They gave me a copy and  made me promise I would watch it while on holiday. Could I say no?  They are a group of lovely, studious, very romantic 16-year-old girls.


“A Walk to Remember”  is  its title. “I passi dell’amore” in Italian. I had never  seen it nor heard about it . It was released in 2002. Now, I’ve just seen it and ...what was it like? It was a beautiful, sweet romance with a very sad ending. So romantic and full of good feelings. My girls wanted me to be part of their world and I was flattered. And I felt 16 again. I was touched, moved while watching,  for more than one reason. I absolutely wasn’t there to judge the quality of the performances, of the script, of the photography. I got involved in the story and felt honored my students wanted me to know them better through what they like.

Furthermore, this bittersweet story reminded me of another beautiful one. The story of two brave teenagers in love. No, not Romeo and Juliet. I’m not thinking of fiction or Elizabethan drama. This film reminded me of two brave teenagers in my real life. A boy and a girl. They left school last year, they were very good in their school-leaving exams, especially her. They were  in the same class, sat behind the same desk, I was their teacher for two years and their story is very similar  to Landon and Jamie’s ,  the protagonists of this film. But with a fundamental difference. Just read through the plot of the film, then I’ll   tell you what the difference is.

The plot  (from Wikipedia)  – Beware of spoilers

After a hazing incident goes wrong, popular but rebellious Landon Carter (Shane West) is threatened with expulsion. His punishment is participation in various after-school activities, including the spring musical, where he meets bookish, uninvasively religious Jamie Sullivan (Mandy Moore), the only daughter of his mother's (Daryl Hannah) church's pastor, Reverend Sullivan (Peter Coyote). Landon has difficulty learning his lines, so he asks Jamie to assist him. She agrees under one condition: Landon must promise not to fall in love with her. Given her highly conservative manner of dressing and low social standing, Landon practically scoffs at the request. 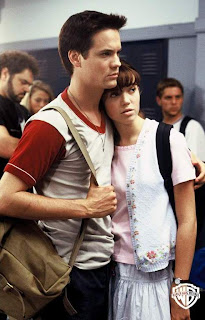 Landon and Jamie's friendship blossoms as they practice together at her place after school. Jamie eventually tells Landon of a wish list that she aspires to accomplish in life. Their fragile rapport is broken when Landon mockingly acknowledges her in front of his popular friends, and Jamie, disappointed by his reaction, refuses to continue the sessions. Landon decides to learn the script on his own, and performs small acts of kindness he hadn't been inspired to do before in hopes of earning Jamie's forgiveness. When they perform in the school play, Landon is surprised when Jamie, in an elegant dress and makeup, reveals herself onstage and sings. Landon comes to a realization concerning his feelings for Jamie. He slips a kiss on her just before the play closes the curtains.
In the following days, Landon continues trying to approach Jamie, this time as a romantic interest, but she continues to reject him. The breaking point finally comes when a few of Landon's friends play a malicious joke on Jamie, and Landon comes to her aid, renouncing his friends in the process. Jamie finally accepts his 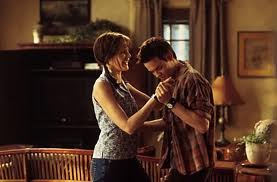 advances as sincere and agrees to a date, with her father's grudging permission. The two begin to fall in love, as Landon helps her accomplish things on her wish list. Jamie's faith in him has Landon believing in his ability to be a better person: he now wants to go to college and enter medical school where he once merely wanted to flee his small town life. 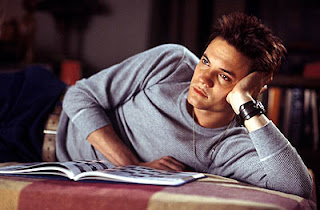 However, in face of the depth of their relationship, Jamie reveals to Landon the secret behind her father's protectiveness: she has leukemia. Later Jamie withdraws while Landon despairs, even driving for hours to ask his rich, estranged cardiologist father to help Jamie. After Landon comes to terms with the reality of Jamie's condition and in the face of his insistence in being with her, the pair make up. Meanwhile, Landon continues to fulfill the wishes on Jamie's list. Jamie is released from the hospital, revealing that Landon's father has paid for her to continue receiving private health care at home. During a stargazing session, Landon proposes to her, unwilling to let her time run out before her number one wish is fulfilled. They marry in the church she had dreamed of, with all their friends in attendance and her father officiating the service. The two of them live a short, happy life together until Jamie dies at the end of the summer. 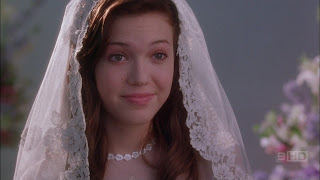 Well, the difference is … my students’ love story has a happy ending.

When three years ago I arrived in that class, AR - the “she” in my  story- was wearing a wig and was being treated with chemotherapy because suffering for leukemia. The he in my story, M., was always, always with her as her supporting, loving, caring , funny  angel. He made her laugh, he made her want to live.  I admired them deeply, both of them, in their  tremendous struggle against a mortal enemy. But they won. She got through the last school-year brilliantly and helped  him to improve in several subjects (English included). She was one of the best students in the final examinations last July and now she has been doing very well at university. They are still together. They are still in love.

I met M. just last Friday and he told me about their recent life, that is, what I've just told you.

And tonight I’ve seen this movie. Isn’t life better than a fairy –tale, sometimes?
Posted by Maria Grazia at Monday, July 04, 2011
Email ThisBlogThis!Share to TwitterShare to FacebookShare to Pinterest
Labels: About me, Movies, School

Oh Maria Grazia, you moved me to tears!!! Indeed, sometimes we can meet angels on earth. May God make these two wonderful creatures happier and happier together.

@maribea
I was moved to tears myself while watching this film and thinking back to what AR and M must have lived through. Thanks for your comment.

I always cry when I watch this one. Guaranteed. Once, my friend and I switched on the TV and it was on a random scene, and after watching it for a few minutes, we couldn't help but sniffle.

@xalwaysdreamx
Well, it means you and your friend - like me - are very sensitive people. You can be touched and you can feel deeply. These are peculiarities of the human beings (but not precisely all of them).If only I could avoid that when I am in a crowded cinema!

when watching a movie, I wept.

I can't stand to see the end! Who knows if the film has based in true story or if it was basically fictional...
Finally landon felt in love with jamie.