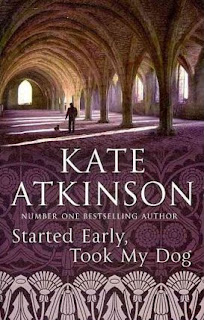 "As well as teashops Jackson had also discovered an unlooked-for delight in bagging the ruined abbeys of Yorkshire on his journey... He still needed to collar Fountains, the mother of all abbeys. Years ago (decades ago now) Jackson had been on a school trip to Fountains Abbey, a rare thing. (...) Rievaulx was sublime but his favourite abbey so far was Jervaulx. Privately owned, with an honesty box at the gate and no English Heritage branding, the ruins had touched his soul in some inarticulate and melancholy place, the nearest thing to holiness for an atheistic Jackson. He missed God. But then who didn't? As far as Jackson was concerned, God slipped out of the building a long time ago and he wasn't coming back, but like any good architect, he had left his work behind as his legacy. North Yorkshire had been designed when God was in his pomp and each time that Jackson came here he was struck anew by the power that landscape and beauty had over him these days" (pp. 72-73)

Reading these pages and being right there was so exciting, touching. And, by the way, I agree with every one of Ms Atkinson's words!

Started Early, Took My Dog is the latest adventure of detective Jackson Brodie, who now has Jason Isaacs's looks in my mind. He's investigating on an apparently ordinary case of adoption - who are Hope McMaster's natural parents? - as well as taking care of fragile creatures , like the dog of a dead person or an elderly lady at a shopping centre, and coping with his own aging.  He travels around Yorkshire, the county of his childhood, and back in time in a melancholic journey of self - knowledge,  while in search for someone else's roots.  (Note to the reader- to -be: don't worry,  you'll be smiling most of the time, don't expect Jackson to take anything too seriously!) However, the case he is working at is not at all a simple one, but a web of mysteries he stumbles on and finds himself caught in.

Who is Carol Braithwaite the woman found dead in April 1975? Who killed her? Why the investigations stopped immediately after the discovery of the body or better they never started? Where is Carol's child, the only witness of the murder?

In a continuous shifting between past and present the reader follows the several story-lines in this thrilling novel which opens in a day like another - these days - in the security chief Tracy Waterhouse's life. A day like any other until she makes a shocking impulse purchase. That one moment of madness is all it takes for Tracy's humdrum world to be turned upside down, the tedium of everyday life replaced by fear and danger. Witnesses to Tracy's outrageous exchange in the Merrion Centre in Leeds are Tilly, an elderly actress teetering on the brink of her own disaster, and Jackson Brodie himself. All the three characters learn that the past is never history and that no good deed goes unpunished (from the backcover).

I especially like Kate Atkinson's style and in it the use of interior monologue and humor. Her skill at depicting, designing charcters through this not-at-all-easy technique,  which reminds  me of Virginia Woolf's great novels,  is undeniable. This literary device consists in leading the readers directly inside the mind of the character and let them follow the flow of thoughts mixed to the perception of the reality around. That's a full immersion in the emotions of the protagonists of the story. Moreover , Kate Atkinson choses a multiple point-of-view on the same events so that  the fragmented puzzle , the scrambled pieces of it , are put in place little by little and form the complete picture before the complacent reader's eyes only in the end . Wit and literary virtuosity are Atkinson's aces up her sleeve together with a totally human detective, no super hero at all, who turns out to be extremely charming.

Just to give you a clue of what I was saying at the beginning of this post ...


Read also my review of BBC Case Histories , the series based on  Kate Atkinson's Jackson Brodie books and my review of " When Will There Be Good News?".
Posted by Maria Grazia at Monday, July 25, 2011
Email ThisBlogThis!Share to TwitterShare to FacebookShare to Pinterest
Labels: Books, From my bookshelf

Great review, MG! Glad you like Kate's work as well. I have just finished reading her Behind the Scenes at the Museum. No Jackson Brodie in it this time, but it's set in York and it's very interesting and witty as usual with Kate.
By the way, I have just found out that I can manage to leave comments on blogger better if I don't tick the "keep me logged in box" - it's a bug I think ! Worked for me anyhow. Ciao. A.x

I like her work too, but I found this book a bit less good than the rest becasue she didn't tie up some of the endings. They'll go in the sequel I guess. Still, a nice review that captures the book very well I think.

Thank you lunarossa and Jenny! I'm always glad to hear from readers and friends.
Thanks, A., for the tip to overcome troubles while commenting. Blogger should try to fix it, though. Once and for good!