AND THE WINNER IS ... JOHN MONTANA WATCHED AND COMMENTED THE OSCAR CEREMONY FOR US 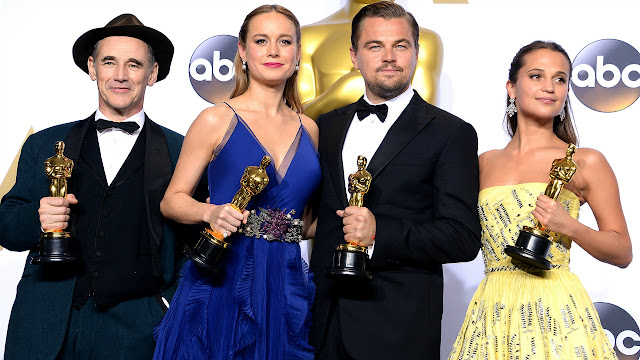 So the 88th Annual Academy Awards were on last night. And as usual, they were filled with controversy because many black actors/actresses felt they were victims of racism because no black actors were nominated this year. And certainly many people have jumped onto this bandwagon, because that has become the most popular thing…find a cause of injustice and jump on it and rife it till it ends and then you jump to the next one.

Is there racism in Hollywood? Probably. Racism exists everywhere, why wouldn’t it show its ugly head here? Was there racism here? I don’t know. Or I can’t say. Because racism is an individual belief that manifests in ugly behavior, whether alone or in a lynch mob. I think what most likely happened is this: With the advent of digital cameras and less money needed to make a feature film, there were literally hundreds of films to watch and consider. 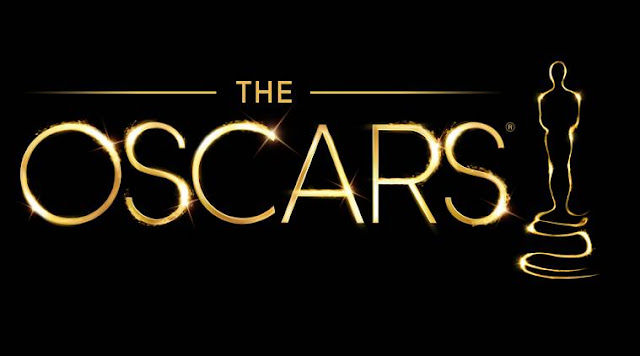 Thousands of performances to watch and judge. I don’t know about you, but I couldn’t watch that many films or performances…even if you paid me! There were so many films and even more performances that weren’t considered. That is a shame, because there were MANY beautiful films and wonderful performances that should have been nominated. Most of the films I saw that were nominated left me with the general feeling of…meh! Some of them I didn’t even see, because I had no interest. Ultimately though, I think that Chris Rock did very, very well under the circumstances. One thing he said struck me and stayed with me. “Back in the early days, African American actors/actresses had more important things to worry about. Like getting raped, or beaten or killed by lynching.” He has a point…many years ago, America acted out its hatred for minorities thru killing and beating and raping. Its our past and it is ugly. However, we are light-years away from that. So let’s continue to grow and change and become better human beings. Let’s act better towards each other, no matter the color of our skin. And I think this happens thru the arts. Thru story-telling. Thru showing others that EVERY life matters and we should be working towards fixing bigger problems than getting our panties in a twist because we didn’t get a nomination for an award. You can cry about it in your limousine as you head back to your $30,000,000 mansion. So with that being said, lets talk about the winners. 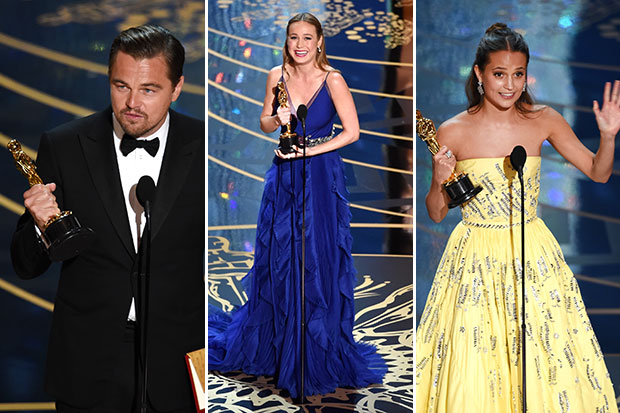 I am actually NOT a fan of the Academy Awards, as generally it seems to me a club of extremely rich people congratulating themselves. But last night’s show was actually quite wonderful. It had many wonderful musical acts, the skits were funny, the presenters were great. There were a couple of cringe-worthy moments when the ass-hats that won an award got up and started to pontificate. But overall, I thought it was a very successful show. I felt the awards were evenly given out and most of the time, I agreed with their choice of who got the award.

The Adapted Screenplay went to the writers of The Big Short. Bravo!!! Very well done on their part. It was a dense and difficult book and they made it not only into a film that you could follow, but one that you could cheer for.

The Best Supporting Actress went to Alicia Vikander. Again Bravo!!! She is an amazing young actress, and her performances this year were nothing short of wonderful. She deserved it completely.

Best Supporting Actor went to Mark Rylance. Again Bravo!!! I have been watching this actor now for several years and he is sooooo bloody good that I was actually very pleased that he won. My only complaint here is that the media and this town led Sylvester Stallone on and made him believe that he was the shoo-in. And this was unfortunate, because I’m sure he was devastated that he didn’t win. The same thing happened with Lady Gaga. She didn’t win, and Sam Smith did. Sometimes, I really hate the media and their games. But that is life in the entertainment biz.

Best Actress went to Brie Larson… I didn’t see her film ROOM, so I cannot comment here. She seemed lovely and was very grateful to have won. I just have to trust that her performance was worthy of the award. From what I hear…it was. 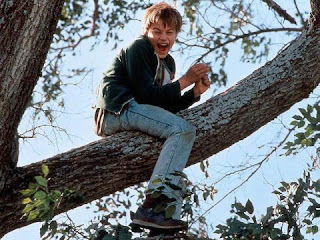 And the Best Actor Award went to Leonardo DiCaprio for his performance in Revenant. You know… I honestly didn’t care much for this film. I thought it was gratuitous violence and bloodshed and revenge to the max. But I will say that his performance was really great. And I have loved his work ever since he was a young man. His performance as a slightly challenged young boy in What’s Eating Gilbert Grape was truly a masterful performance. His work is always thoughtful and intense and I am really very happy that he was finally rewarded for his hard work over his illustrious career.


The Best Director went to Alejandro Gonzalez Inarritu. Again! Second year in a row. Whatever! Wasn’t my choice, so I’ll just move on.

Best Picture went to Spotlight. Bravo!!! It was a great film and deserved it. And I was happy that it beat out Revenant, because Revenant is a journey of revenge in a violent world. Spotlight was exactly what the title implied…A spotlight being shown into a dark hole that has been covered up for decades. I also was happy that it won because it was an “ensemble piece”. There were no stars that stood out. It was a very sad and upsetting story that was told in a moving and very powerful way…by many actors and actresses. Working together to tell the same story! The director concentrated on ONLY telling the story, and the story should ALWAYS be the star. The story needed to be told, and changes needed to happen. This is the type of story that I was referring to earlier in this article. These are the types of films that bring about change, because they bring light onto ugly and disturbing behaviors that people engage in. These types of stories will bring about more change, in a quicker way, by engaging an audience in a thought-provoking manner. These are always more effective than just complaining about the issues. And they always have been!

John Montana is an actor living with his wife in L.A. He has begun to make short films. His most recent film, “Hungry” has been accepted into 24 film festivals all over the world. Check out his short film - HUNGRY at No Title Production Films.
Posted by Maria Grazia at Tuesday, March 01, 2016
Email ThisBlogThis!Share to TwitterShare to FacebookShare to Pinterest
Labels: Alicia Vikander, Brie Larson, Cinema, John Montana, Leonardo di Caprio, Mark Rylance, Movies, Oscars, Spotlight, The Oscars

I picked a few wrong in my pools. Not that I was expecting to win.