PERIOD & MORE PERIOD - SCANDALOUS LIVES FROM THE PAST 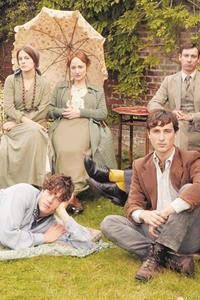 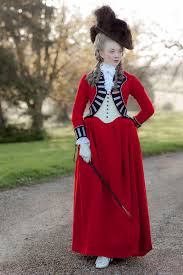 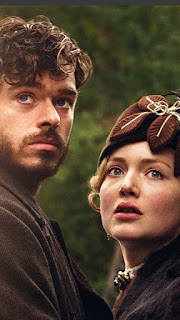 The three BBC productions showcased in this post - two upcoming ones and one just broadcast - focus on very unconventional lives and openly deal with sex: The Scandalous Lady, Lady Chatterley's Lover and Life in Squares.


Natalie Dormer leads a cast of British actors in this gripping 18th century drama which premieres on BBC2 tomorrow, 17th August,  detailing the scandalous life of Seymour, Lady Worsley, who dared to leave her husband and elope with his best friend, Captain George Bisset, played by Aneurin Barnard.
The heroine of The Scandalous Lady,  courageous Seymour, Lady Worsley,  escaped her troubled marriage only to find herself at the centre of a very public trial brought by her powerful husband Sir Richard Worsley, played by Shaun Evans, who seeks compensation from her lover for the affair.
As this extraordinary true story unfolds, Lady Worsley takes the brave decision to publicly expose the secrets of her marriage. The scandalous courtroom revelations challenge the hypocrisy of the law that brands a wife the property of her husband, calling into question the whole concept of a woman’s 'worth'.
The series is based on Hallie Rubenhold’s book, Lady Worsley’s Whim, inspired by the full length oil painting of Lady Worsley that hangs in Harewood House in Yorkshire. She is depicted wearing a bright red riding habit.

Sunday nights are being sexed up by BBC One as it pits new Lady ­Chatterley’s Lover against  ITV 's Downton Abbey last series in the ratings war.

Holliday Grainger plays Lady Chatterley with James Norton as her war-wounded husband Sir Clifford Chatterley and Richard Madden as gamekeeper Oliver Mellors, in  90-minute TV movie directed by Jed Mercurio. It is scheduled to air on BBC One in September 2015 as part of an ambitious season of classic 20th century literature.

Jed Mercurio, writer and director, says: “I'm hugely flattered that such a fabulously talented young cast will bring these iconic roles to life.”
Lady Chatterley’s Lover, an early-20th-century tale of love across class boundaries, tells the legendary and romantic story of Lady Chatterley’s affair with her gamekeeper. With its original 1928 edition censored in Britain for over 30 years after it was written, Lady Chatterley’s Lover by D. H. Lawrence is one of the most sexually pioneering novels of the 20th century.

My book  to TV series review

James Norton, who recently also appeared in Life in Squares (read further in this post) as Duncan Grant, the BBC drama about the Bloomsbury Group, said he hoped the film would confront people’s preconceptions about Clifford’s character.


“To change everyone’s view of him made the story so much more contemporary and relevant. I think as an actor it’s crucial to like the person you play, however weird and disturbed they are, and I deeply loved Clifford. I felt he was a tragic victim of the war and his social conditioning. I felt like he and Constance would have gone on and had a very happy relationship if he had not had the injury. I think Jed’s adaptation has made something that was black and white into something a bit more grey, very contemporary and more realistic.”

Witty American author Dorothy Parker once famously said that the Bloomsbury Group “lived in squares, painted in circles and loved in triangles”. The group of British writers, artists and intellectuals including Virginia Woolf, her husband Leonard, her sister Vanessa, painter Duncan Grant and others,  were decades ahead of their time with their ideas about free love and their notoriously complicated, intertwined relationships form the basis of three-part drama Life In Squares.

This  BBC Two mini-series has been broadcast in the latest weeks and follows the bohemian trio made up by Virginia Woolf, her sister Vanessa Bell  and painter Duncan Grant (played as young people respectively by Lydia Leonard, Phoebe Fox and James Norton and in later life by Eve Best, Catherine McCormack and Rupert Penry-Jones) and their like-minded friends as they attempt to negotiate their turbulent artistic and sexual lives.

Life in Square is an intense, riveting journey through the complicated lives of great artists and extraordinary innovators. It is available online on BBC iPlayer for UK viewers. Let's hope it'll be soon on PBS Masterpiece too for US audience to enjoy and appreciate.