AT THE CINEMA - OKAY WILL BE OUR ALWAYS: THE FAULT IN OUR STARS IN ITALY (COLPA DELLE STELLE) 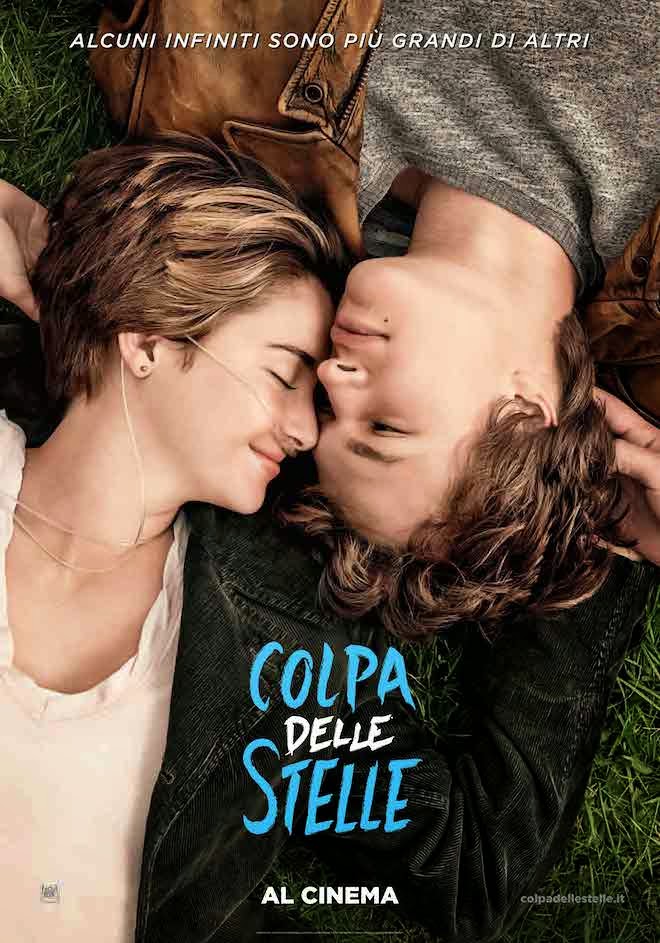 “The world is not a wish-granting factory.”

I was so proud of myself because I had read all through John Green's book smiling or laughing, getting sad or moved,   but never giving way to tears.   I read The Fault in Our Stars not long ago and in a very short time,  appreciating Mr Green's talent at creating a brilliant YA romance (my review).

Now, it is not that I'm not proud of myself anymore for what happened, but, you know, it is not easy for me to get moved to tears in public and it is always quite embarassing when the lights in the theatre are switched on and you are in a flood of tears and blowing your nose, isn't it?
In this case there were many wet eyes and noses blown here and there at the end of  The Fault in Our Stars (Colpa delle Stelle) which opened on 4th September here in Italy, so I felt a bit less foolish.

Anyway, what I especially loved in this movie is that, just like the book, it is not whining or melodramatic. What prevails is teenage lightness and bitter irony,  which becomes harsh, if not paradoxical,  sarcasm some times.

Cancer and young love, death and life, hope and desperation: tough dichotomies to deal with without ending up with sappiness or melodrama. I couldn't find traces of either in this touching story, honestly.


Sheilene Woodley and Ansel Ergolt, after playing sister and brother Prior in Divergent, are awesome in their portrayals of John Green's present-day star crossed lovers:  Hazel Grace Lancaster  and Augustus Waters. She is 16 and has been fighting cancer since she was 12,  he  is 18 and has lost one of his legs after suffering from osteosarcoma. Hazel is more angry than desperate to live a "half" life when she meets Gus at a cancer patients support group. They discover they have lots in common and that life can really surprise you when you less expect it. Though Hazel tries to resist Augustus's contagious energy, optimism and will-power, the two start trusting each other and bonding. They share their little infinity filling it in with gripping, funny,  romantic, exciting, emotional, exhilarating, unforgettable moments.

It's impossible to hide the fact that this movie, which  is a faithful adaptation to the book, deals with the tragicality of being a cancer patient but it also gives quite a realistic picture of what being  a teenager is like. Obviously,  another of its main themes is how to face the unavoidability of death, but at the same time it is a hymn to life and love. Can all that be handled with lightness and irony? Apparently it can and it is in The Fault in Our Stars, in total, blunt, brutal honesty and an extraordinary series of teary and laughable situations,

Don't be scared to get moved, you'll be happy and grateful after meeting Hazel and Augustus. There's much to learn from their brave and stubborn love for life.

The Fault in Our Stars (Colpa delle stelle) is in Italian cinemas these days and will be released in DVD and Blue-Ray on September 16th in the US and November 3rd on the UK. You can pre-order it at Amazon.com and Amazon.co.uk

Posted by Maria Grazia at Saturday, September 06, 2014
Email ThisBlogThis!Share to TwitterShare to FacebookShare to Pinterest
Labels: At the cinema, DVDs, From Books to Movies, Movies, Shailene Woodley, The Fault in Our Stars, YA, YA fiction