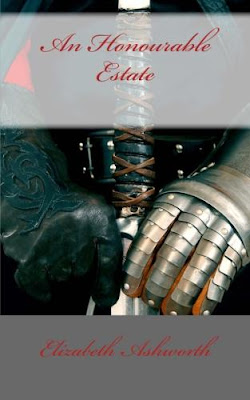 Elizabeth Ashworth accepted my invitation to present her just released novel to you readers of FLY HIGH! She has also granted a signed paperback copy of An Honourable Estate.
Leave your comment + e-mail address to be entered in the contest. This giveaway is open worldwide and will end on July 10th.

Thank you for inviting me to make a guest post on your blog to mark the publication of my new novel, An Honourable Estate. The pouring rain that we’ve had recently in the north west of England seems appropriate for the launch, because the story begins in the year 1315 when the rain was also torrential.  There was famine because the crops rotted in the fields and the animals were struck down with disease.  People were starving and the price of food was very high.
Like now, people tended to blame government for everything and Adam Banastre, a minor lord from Lancashire, decided to lead a rebellion against his overlord, Robert Holland, who was secretary to Thomas, Earl of Lancaster.  One of the men who joined the Banastre Rebellion was William Bradshaigh.  But the rebels were defeated at a battle at Preston, on the banks of the River Ribble.  They fled for their lives and, as wanted men, had no choice but to live as outlaws. 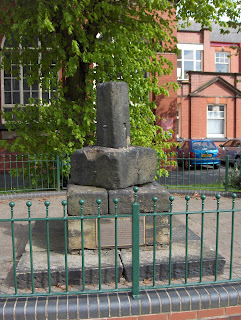 The story of what happened to William’s wife Mabel is a legend that has been told for hundreds of years in Lancashire.  It’s known as the legend of Mab’s Cross.  The remains of Mab’s Cross can still be seen in Wigan, outside a school named Mab’s Cross Primary School. It was to this cross that Lady Mabel walked barefoot as a penance for her adultery.

There are several versions of the story, but the plot of my novel closely follows true historical events, beginning in 1315 and ending in 1322 when Thomas, Earl of Lancaster fought King Edward II at the Battle of Boroughbridge and was defeated.
My research was helped enormously by an old booklet I found in the Lancashire Authors’ Association library. It was written by Rev. T.C. Porteus in the 1930s and is called New Light on the Mab’s Cross Legend.  Porteus compares the two main versions of the legend with the factual history of the time.  His interpretation made a lot of sense and this is what I used as the basis for my plot development. 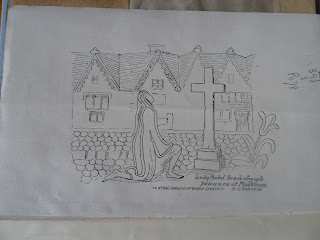 In his booklet, Porteus refers to William Bradshaigh as a ‘Lancashire Robin Hood' and An Honourable Estate also contains elements of the Robin Hood legend.  There are sheriffs and outlaws as well as Scots and wars and rebellions.  And, of course, there is also Lady Mabel de Haigh.  She is left alone and vulnerable.  Because William is an outlaw, their lands at Haigh are forfeit to the king and are given to another man, Sir Peter Lymesey.  But Mabel won’t give up her inheritance.  In a 14th century inquest into the ownership of Haigh, it is recorded that Mabel ‘intruded’ on the lands.  In other words she refused to move off them.  It seems she was a determined woman in real life and I hope that I’ve done her story justice in my novel.

This sounds really good! I'd not heard of this legend before. Thanks for the chance to win it.

Oh, boy, this sounds so good. I just googled Mab's Cross, read about the legend. Would love to read more. And, I loved the trailer. Thanks for the giveaway.
lcbrower40(at)gmail(dot)com

This sounds like a fascinating story. Thanks for the giveaway. jman1985@yahoo.com

I read The D'Lacy Inheritance by Elizabeth Ashworth and really enjoyed it. Looking forward to reading this one too. Loved the book trailer.

It must have been really tough for Mabel to live in those times. I admire her strength and resilience in those trying times.
I would like to read this book.
zora.brozina at gmail.com

This sounds good! Thank you for the giveaway.

The reign of Edward II was a trying time for England. (When were medieval times not?) Your book trailer is evocative - especially the music).

Love historical featuring women of strength. Thanks for the giveaway.

Very interesting! Looks like a good read. Thanks for the giveaway!
cherringtonmb at sbcglobal dot net

Sounds fascinating. I was not familiar with the historical aspect. You had me at rain, however, since we have so much of it here in WA. Even today....ugh. tomorrow's supposed to be nice :) finally. It's amazing how much it affects and we take it for granted. Our tomato plants have rotted several times the past couple years since it stays wet so very long as well as other garden plants. So I could relate. I love Scottish accents and some of the history, does that count? I'd love to read this book.
schaf sue at gmail dot com

Thank you for all the comments. I'm encouraged by how many people are interested in reading the book.

What Suzan says about her tomato plants should also remind us of how much we take provision of our food for granted. Just imagine that those plants which rotted were your harvest for the year.

I am looking forward to reading your book. I love history-based fiction.

More than 20 years ago, a young italian girl wishing to live in England, I used to work at Wigan Tourist Information Center. Among the things to be seen, together with Wigan Pier of course, we used to mention Mabel's Cross and I remember going to see it too. Put this together with the fact that I love historical novels set in England, and you get someone really eager to read this book. I have already won one of MG giveaways but I wouldn't mind trying again :-) Silvana
vava_darcy@yahoo.it

What a wonderful co-incidence. I hope you enjoy the story.

I have never heard of this legend before. the story sounds like it gives an good insight to rural living at that time. very interesting!