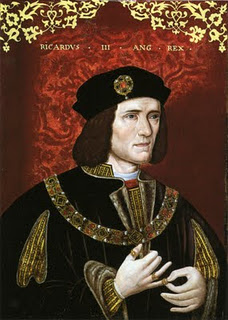 What follows is an appeal in aid of the archaeological search for the lost grave of King Richard III from Philippa Langley. Philippa  is a screenwriter and founder, in 1999, of the Scottish Branch of the Richard III Society. Concurrently with this archaeological project she is preparing a script about the real Richard III. Here's what Philippa wishes to inform Ricardians and  friends about:

After the battle of Bosworth, Richard III was interred in the choir of Greyfriars church in the centre of Leicester. Ten years later Henry VII had the remains placed in an alabaster tomb where they remained until the Dissolution of the Monasteries. In late August 2012 archaeologists are due to excavate the site which, after exhaustive investigations, is believed to be his most likely last resting place, in the Choir of the former Church of the Greyfriars.

New map regression analysis and Ground Penetrating Radar have helped to pinpoint the location, and it is here that the first-ever search for the grave of an anointed King of England will begin.

Facilitated by Leicester City Council, and in association with the Richard III Society, the project is funded by prestigious local organisations including the University of  Leicester, whose experts will be on hand to examine any discoveries and conduct DNA analysis if appropriate.

In short, everything is on schedule and ready to get under way . . . except that a sudden and unexpected shortfall of £10,000 has been encountered. The lack of this sum, although it represents only a proportion of the overall budget, will mean abandonment of the project. 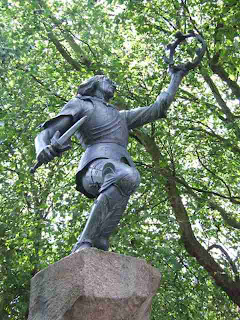 The aim is to film the dig, and negotiations are in place for a potential landmark TV special – not only documenting the archaeology, but also bringing the story of the real Richard to our screens for the very first time, with input from specialists including Dr John Ashdown-Hill and Annette Carson.


This appeal is intended to make good the deficit and ensure the dig goes ahead as planned. At the moment we are seeking pledges only, NOT money. All sums are welcome, whether large or small. But the closing date is very soon . Please note that we need to receive all pledges by Friday 20 July, 2012.

For full details of how to make your pledge and how funds will be handled CLICK HERE and read  page 2 of  the appeal official leaflet.

- Read more about Ricardian Archaeology at the site of  The Richard III Society
- Read and watch the video BBC The One Show - Is this the lost coffin of Richard III?