OUT OF FEAR BY DON HUTCHESON - BOOK REVIEW & GIVEAWAY 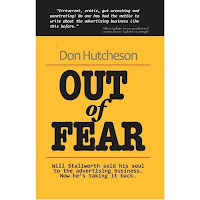 GIVEAWAY - You can win an autographed copy of Out of Fear paperback. Leave your comment and add an e-mail address, you'll get a chance to win this amazing new book. The giveaway is open worldwide and ends on May 13th.

My Review - Out of Fear is many books in one
First, it is a contemporary story of one man’s journey to liberation—an in-depth look into three tempestuous weeks in the 30th year of protagonist, Will Stallworth. Will is a rising star in the glamorous world of advertising in 1984—a successful writer and creative director who is at the moment going through a serious melt down, just when he is given the chance to run the creative department of a hot ad agency and lead the pitch for a $100 million account. While Will is successful in his work, his striking good looks and confidence make him an irresistible magnet to women. Immediately upon returning to his hometown, Atlanta, Georgia, he gets involved with a beautiful sales representative for a top TV station. They begin a torrid affair.


Behind the bulletproof façade, however, Will conceals a fragile troubled soul. He experiences life as a listless automaton. He must contend with horrifying nightmares of a long-lost brother and panic attacks that render him incapable of performing.
Secondly , Out of Fear is  the story of three generations in the lives of a broken and emotionally bankrupt American family replete with deep, incomprehensible hatred; and enduring love and commitment that knows no end. Will despises his controlling, bigoted father and blames him for everything wrong in his own life, especially for the death of his cherished, elder brother, Randall, years before. Will thinks he has rid himself of his father’s control over him after 12 years away, living on the West coast.  But as his sister Maggie reminds him, “He still runs your life, Will. ”

He loves Maggie dearly, although their relationship has been mightily strained for a decade while Will ran away and hid from the demons and fears of his past. Their bond has tightened since Will’s return to Atlanta and is one of the tenderest portrayals of forgiveness in the novel. The ending scene with Maggie and Will and the memory of Randall made me cry.
Thirdly - this novel  is more than simply Will’s personal story  or the story of his family. Out of Fear  is a no-holds-barred look into our competitive, insensitive, frantic, greedy, business-dominated world. The advertising microcosm of the novel represents the values and dynamics of our entire society’s macrocosm: Outward appearance  matters more than inner wisdom or values; money and success are the most revered goals; rivalry and cutthroat competition the modus operandi for the majority of us . People live  like lemmings according to Will’s perceptive and sensitive sister, Maggie. Few individuals have the courage or conviction to take the road less travelled.
Women are highly intelligent and strong in Don Hutcheson’s novel and there are many such women in Will’s life: Lara Blessing, his former client; Susan Hammond, account director at the agency; Deborah Bernstein his art director partner; Maggie, his sister; Gertrude, his grandmother, and finally his mother, Bettye Stallworth, who has had to carry the weight of this family through storms and anguish.
The other women in the story represent the downside of the world of work in 1984: Jacqueline Smithdeal, Will’s girlfriend is ravishing, ambitious and emotionally shallow; Ellen Sakamoto, the copywriter brought in when Will’s bosses lose faith in him, represents the new breed of women who have learned that to survive they must grow armor as thick as men’s.

My impression is that this story may be definitely liked by a male audience. I‘m not sure about female readers.  I personally  did like it. Me, a Jane Austen & Mrs. Gaskell fan. What I mostly appreciate in it is the effective style; the way the story is told. Furthermore, I  like to discover “ connections” while reading and, in this case, I  got the impression Will could be an adult Holden Caulfield, one of my favorite modern literary characters. His special relationship with his sister reminded me of Holden and Phoebe’s; his troubles related to a “wrong” father figure reminded me of Holden’s dashing but absent father; Will’s adoration of his older dead brother is another analogy.
The point of view  the story is told from is Will’s and things are seen from a man’s point of view, especially sex. It can sound shallow at times or careless. (Yes, I mentioned sex because there are a couple of very steamy scenes  in this novel  and wanted to warn those who might be disturbed by them. However, it is definitely not an erotic novel, just highly sensual.)
Will is going to undergo many more changes,  it seems.  His journey in Out of Fear is only the starting point. Don Hutcheson is working on the other three books of a quartette  with Will  as the protagonist in each.  The second novel, Will Wakes Up, is due out in late summer and follows a 46-year-old Will Stallworth into marriage, a first child and more business and personal challenges. 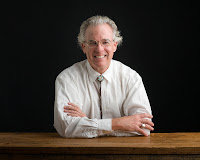 Don Hutcheson is a writer and entrepreneur who lives in Atlanta, Georgia. Inspired by his years in the advertising business, Hutcheson wrote his first novel, Out of Fear, which I had the honor and pleasure to read before its publication.  It is a psychological drama, in which creative superstar Will Stallworth is ambushed by his darkest demons amidst the intrigue of the advertising world of 1984. Out of Fear is the first of four novels about Will Stallworth. The second, Will Wakes Up, will be released in the Fall of 2011.
Out of Fear is now available as a paperback and in the Kindle edition 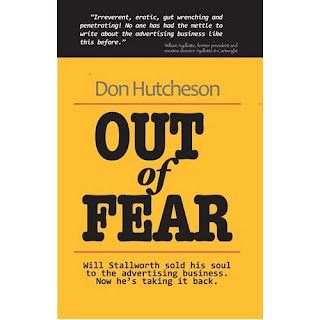 GIVEAWAY -  Any commenter to this post can have the chance to win a signed copy of Out of Fear paperback. Don't forget to  add an e-mail address! The giveaway is open worldwide. The name of the winner will be announced on May 13th. Stay tuned! Interesting discussion of the novel with author Don Hutcheson coming soon on Fly High!
Posted by Maria Grazia at Sunday, May 08, 2011
Email ThisBlogThis!Share to TwitterShare to FacebookShare to Pinterest
Labels: Books, From my bookshelf, Giveaway

This seems as an interesting reading! I would love to read it!

From your review this sounds like a very interesting and densely plotted novel and I think I would like to read it and maybe evn my husband would as well.

Please enter me in the giveaway and thanks for opening it to worldwide entries.

Not exactly my cup of tea, but if you liked it, it must be worth reading.

Sounds like a good read—please enter me to win!

I like Mad Men series and I'm fashinated by advertising world. This must be a very catching plot. Thanks for the giveaway.

Hi Maria Grazia,
you're an endless source of new ideas!!! I have a new book for my wish list. And I can't wait until I read more about this interesting writer. I'd love to receive a signed copy.
My email address is maribea@tiscali.it
Thanks for sharing your readings with us.
M Beatrice

I love the Don Draper character from Mad Men but this book appeals to me for the personal journey of the protagonist.

Thanks for stepping out of your regular book reads. Count me in for the give away. Fannythornton.at.gmx.com