THROWBACK THURSDAY - SOMEONE TO RUN WITH by DAVID GROSSMAN

For this event hosted by Jenny at TakeMeAway , I've chosen this beautiful  novel set in Jerusalem by David Grossman, SOMEONE TO RUN WITH (2000, English translation 2003). Throwback Thursday is a corner to write about good reads from the past. Those books we so much loved and we don't want to forget . 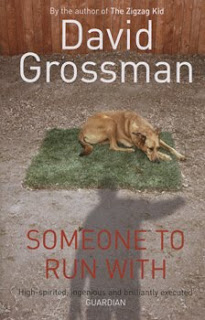 "Someone to run with" manages to be both a profound study of the inner lives of two teenagers and a novel that has pace, bite and a well-sustained plot ... beautifully drawn ... an intensely gripping novel (Financial Times)

It is actually an incredibly beautiful book that manages to unite social realism (contemporary life in Israel) and dizzy teenage romance. It is full of feelings and emotions and drawn with intelligence, skill and sensitivity.
The plot 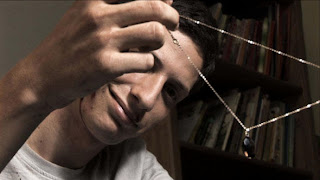 The story follows two Israeli teenagers - Assaf, a lanky errand boy in Jerusalem's City Hall, and Tamar, a runaway with "eyes that saw too much" - and Dinka, the golden Labrador that eventually brings them together.
Grossman has sprinkled a good deal of destiny into this story, such that by the time the two puppy lovers meet, their otherwise implausible romance seems inexorable. When the story begins, Assaf is poised on the brink of independence. He is spending his summer estranged from his parents, who are tending to his sister in America. He is also estranged from his childhood friends, who have coupled off and left him alone with his computer games. Assaf has plenty of free time on his hands and a head filled with fantasies, which is to say that the potential for self-invented adventure is high. "Sometimes it is so easy to determine the exact moment when something -- Assaf's life, for instance -- starts to change, irreversibly, forever," Grossman writes.
Enter Dinka, the plot incarnate. When the stray dog turns up at City Hall, Assaf is tasked with finding her owner. But Dinka immediately takes charge, dragging Assaf at breakneck speed through the streets of Jerusalem in search of Tamar. Assaf knows nothing about the girl or her whereabouts, but Dinka draws him into her world by leading him to her favorite haunts. As he meets Tamar's eccentric band of acquaintances, he gathers clues and begins to sense that Tamar is in some sort of trouble.... 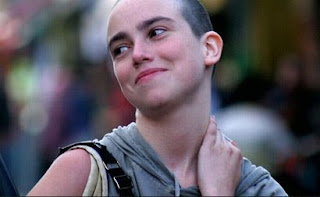 Tamar has embarked on a heroic quest of her own, and she has, indeed, placed herself in harm's way. Disappearing from family and friends, she has slipped into the city's seedy underground in search of her brother, Shai, a heroin junkie she hopes to rescue. She finds him holed up in a sort of halfway house for street performers and discovers that he's indentured to the thugs running the racket. In order to get close, she impersonates a wayward chanteuse and subjects herself to the gang's abuses, waiting for the perfect moment to escape with Shai in tow...
(from http://www.januarymagazine.com/) 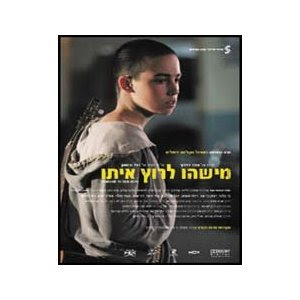 It is a brainy and thrilling quest novel that reveals a complete understanding of the human heart. There are some unforgettable moments. And the two protagonists are -  Tamar especially - two unforgettable compelling characters.
The story has been adapted for the screen (2006) with a very small  budget but  the result - which I managed to see -  is rather disappointing, not only for the poverty of the financial means. For instance, the story - line in the film is definitely confused, even if you have already read the book.
What I recommend heartily is to read the novel! You won't be disappointed.
( the DVD is available here and the book here)

OTHER POSTS ON DAVID GROSSMAN AND HIS WORKS
Until the End of the Land
Posted by Maria Grazia at Thursday, May 20, 2010
Email ThisBlogThis!Share to TwitterShare to FacebookShare to Pinterest
Labels: Books, From Books to Movies, From my bookshelf, Throwback Thursday