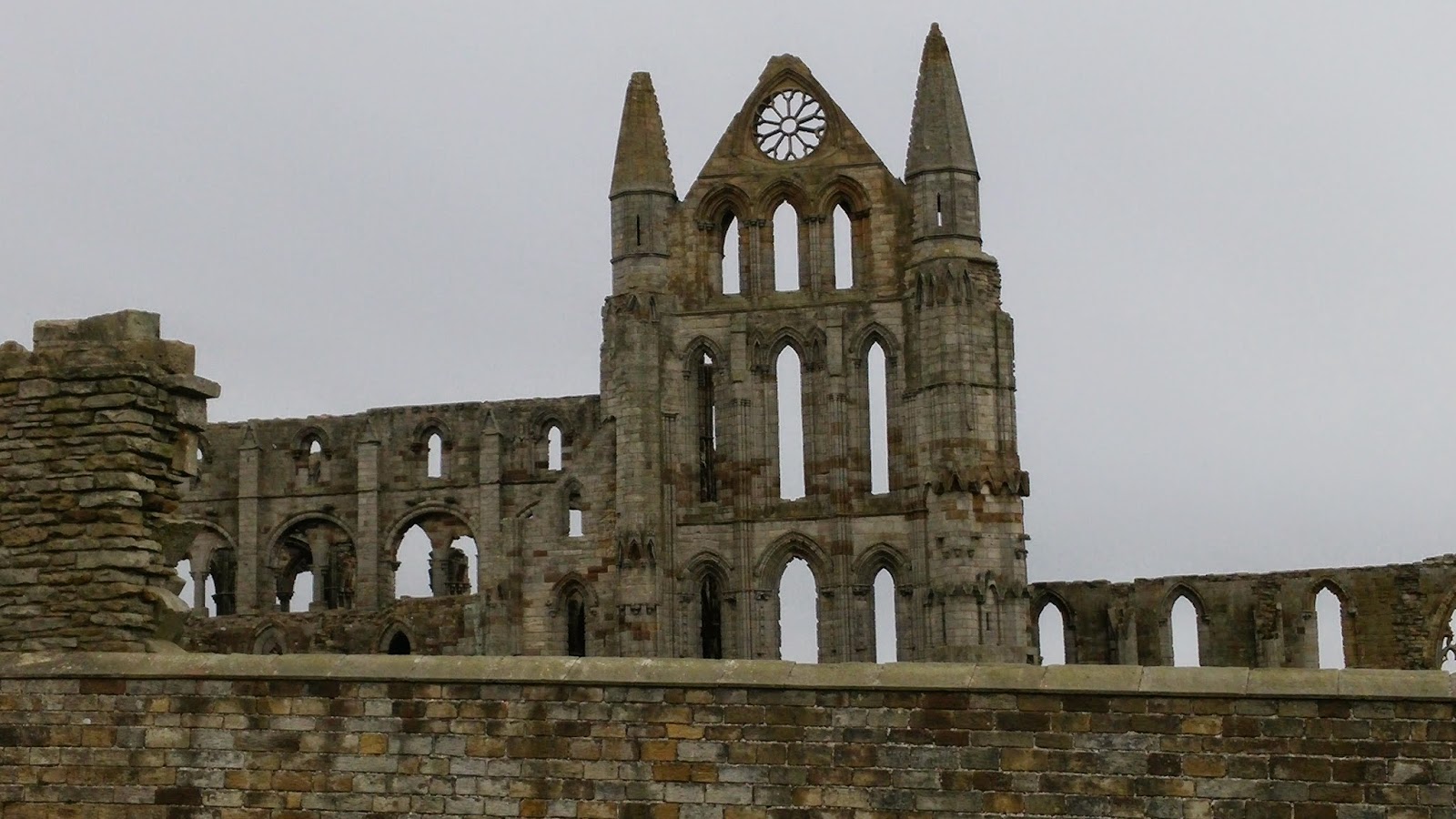 Do you think I've been neglecting my little blog lately? You may be right, I admit it, but I've been extremely busy working, living and even travelling. I've recently been to Yorkshire to visit friends and spend a weekend there. My trip brought me to York,  which is a town I already knew and  I really love for its connections to Richard III, for its ancient allure and historical heritage. But we also spent our Sunday by the sea and I was truly intrigued by Whitby, for its charming views and its connections to great Victorian literature, and had the chance to literally fall in love with a small, picturesque village on the sea called Robin Hood's Bay. In this post I'll collect the most interesting news and information I found online about Whitby as the setting of Victorian literary works,  adding some of the pictures I took during my visit.  Here we go then! Do you know on the pages of which unforgettable  Victorian  novels can we find Whitby and its landmarks?


Bram Stoker found some of his inspiration for 'Dracula' after staying in Whitby in 1890. He stayed in a house on the West Cliff and was trying to decide whether it would be suitable for a family holiday.
By all accounts, he was quite smitten with the atmosphere of the town; the red roofs, Whitby Abbey, the church with its tombstones and even the bats flying around the many churches.
Stoker found a general history book at Whitby library, which was originally near the Quayside. He tells us so at the top of a sheet of his notes taken from William Wilkinson's 'An Account of the Principalities of Wallachia and Moldavia' (1820). These notes contain the only reference to Dracula, the historical figure, in all of Stoker's papers. 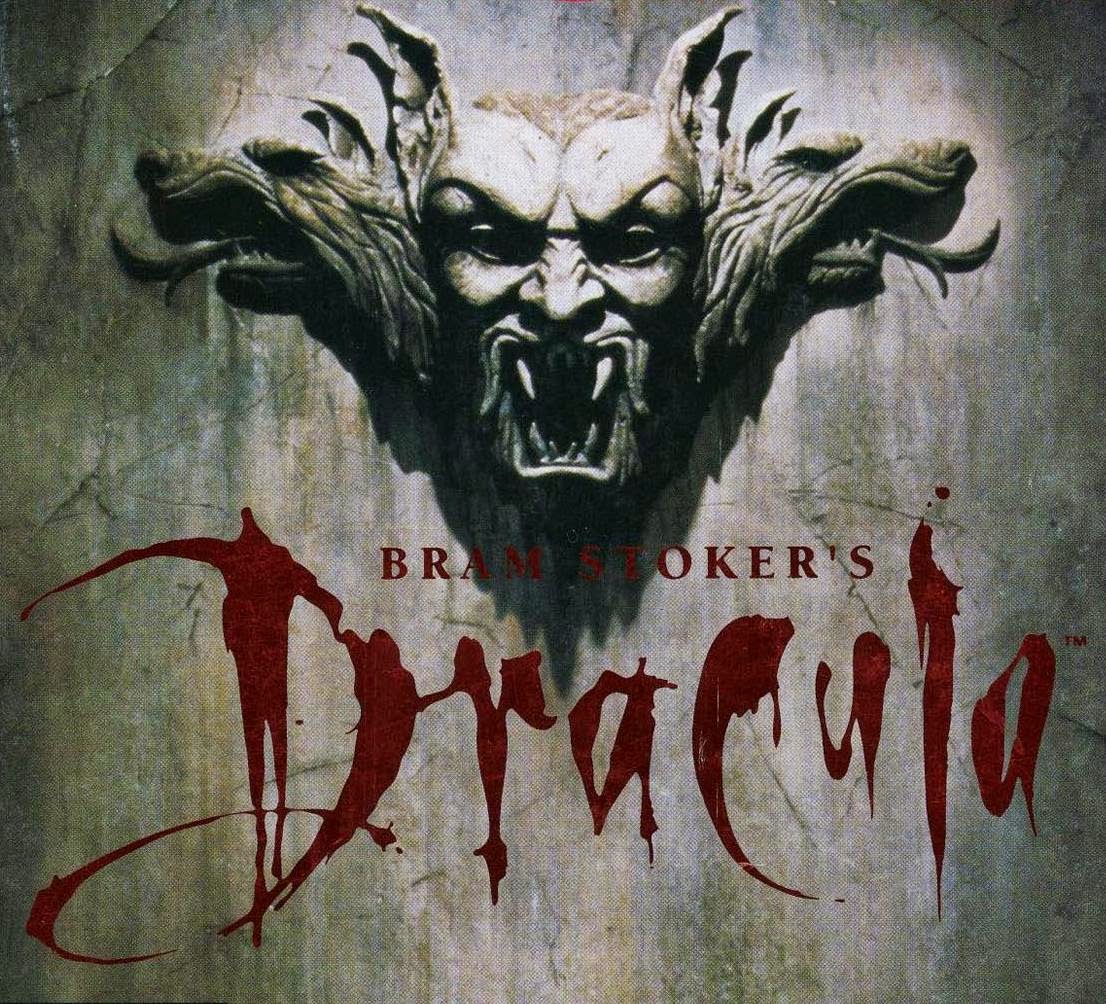 "...there was a look of fear and horror on his face that the men said made them shudder. Poor dear old man! Perhaps he had seen Death with his dying eyes!" 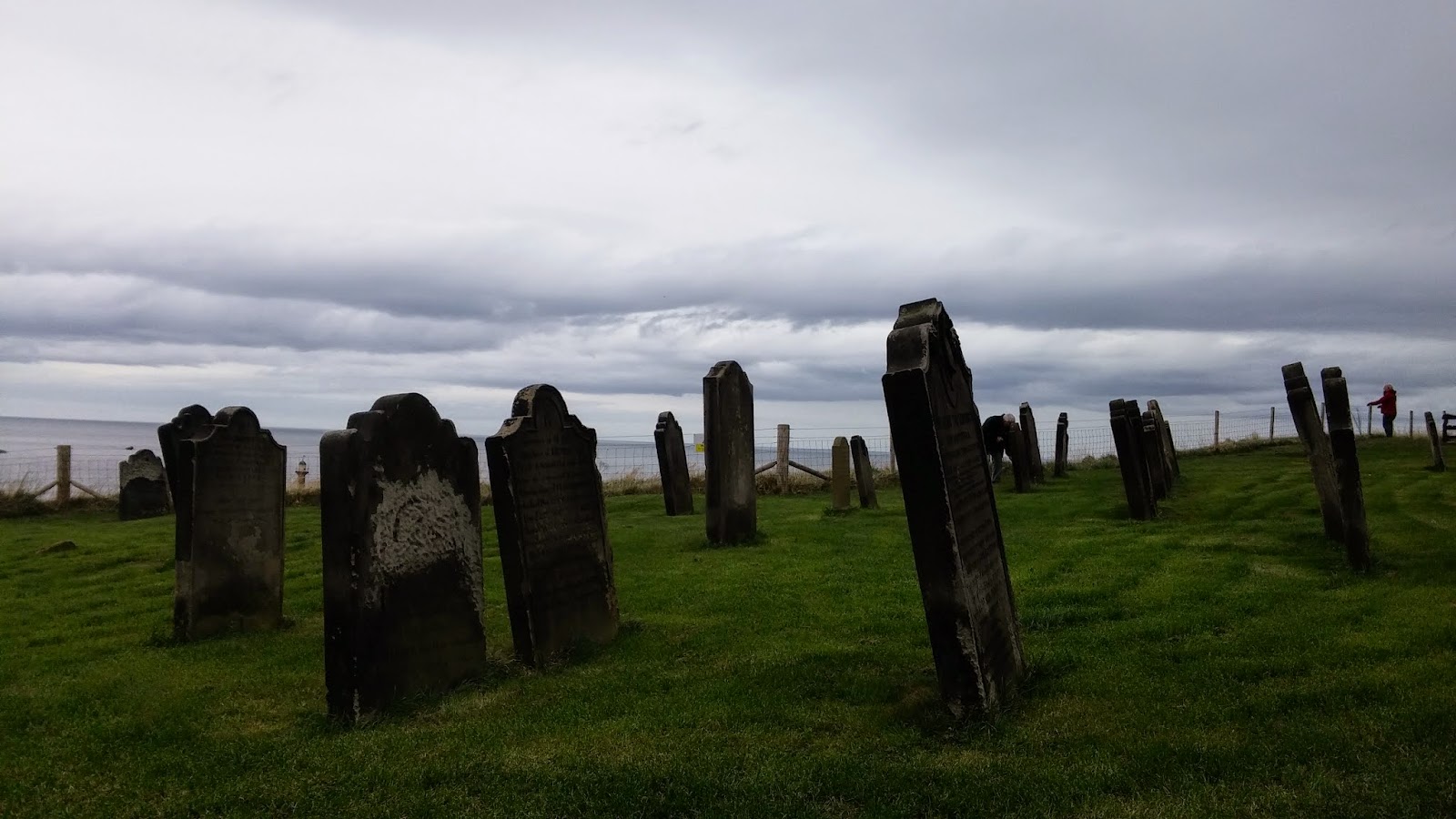 Stoker's Dracula is shipwrecked off the Yorkshire coast, he is actually on his way to London on the Russian schooner, Demeter. He comes ashore in the guise of a black dog and wreaks havoc on the town.
One of the characters in the novel, Mina, keeps a journal containing detailed descriptions of Whitby and those areas frequented by Dracula.
"Right over the town is the ruin of Whitby Abbey, which was sacked by the Danes, and which is the scene of part of "Marmion," where the girl was built up in the wall. It is a most noble ruin, of immense size, and full of beautiful and romantic bits; there is a legend that a white lady is seen in one of the windows." 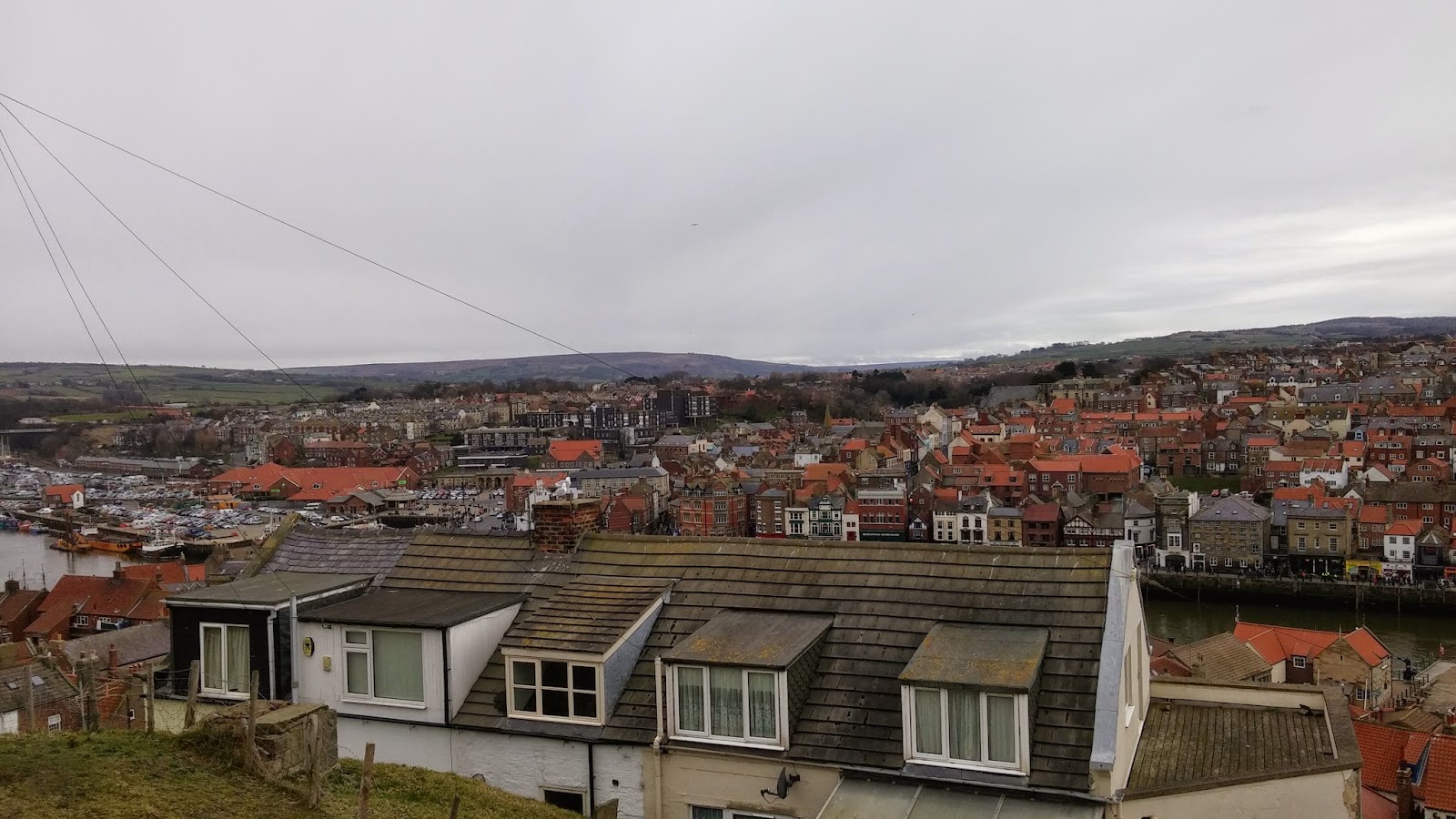 Visit  the site of The Dracula Experience in Whitby 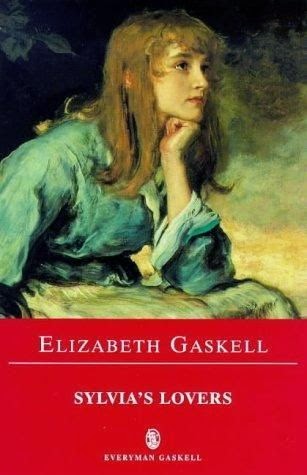 In 1959 Mrs Gaskell, accompanied by her daughters, visited Whitby for a summer holiday, staying at n.1 Abbey Terrace, some of the rooms of which commanded a magnificent view of the sea. The house belonged to a family named Rose, a name which Mrs Gaskell has used for two of her characters in two different stories as well as in Sylvia's Lovers. It was during this visit that Mrs Gaskell collected the information which served as the basis of her story. In her novel Whitby is called "Monkshaven".

A powerfully moving novel of a young woman caught between the attractions of two very different men, Sylvia’s Lovers is set in the 1790s in an English seaside town. England is at war with France, and press-gangs wreak havoc by seizing young men for service. One of their victims is a whaling harpooner named Charley Kinraid, whose charm and vivacity have captured the heart of Sylvia Robson. But Sylvia’s devoted cousin, Philip Hepburn, hopes to marry her himself and, in order to win her, deliberately withholds crucial information—with devastating consequences  (from goodreads)

The sea and seafaring folk always had a peculiar attraction for Mrs Gaskell, which she explained saying: "The blood of the Vikings still lingers in my veins".
The coast north of Whitby was very familiar to Mrs Gaskell thirty years before she visited this old-fashioned fishing town, when she made long visits to Newcastle, a town which had a seafaring relation with Whitby. 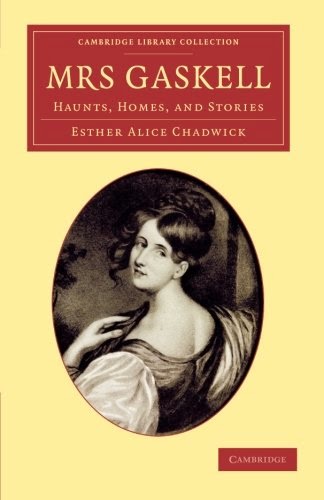 It is a debatable question whether Mrs Gaskell - having read of the terrible press-gang days at Whitby, which resulted in the riot of 1793 - went there with the intention of verifying the facts and locating the events, or whether, having gone there for a holiday, she heard of the press-gang riots and then gathered her materials and planned her story. Many think the latter was the case, for she rarely visited a locality without gaining some knowledge which she was able to utilize in her literary work.

Off to read Sylvia's Lovers now!  Because, you know, as an admirer of Mrs Gaskell and her work, I'm rather ashamed I haven't read this novel of hers so far. I must get ready to a good cry, since Mrs Gaskell herself defined Sylvia's Lovers, "the saddest story I ever wrote" . Since  I love her Mary Barton and, especially North and South, since I have read also Ruth,  Wives and Daughters and Cranford, I can't leave this unread. Now I have even one more reason to add Sylvia's Lovers to my Gaskell reads: to recognize the places I visited and Mrs Gaskell used as the setting of her story.  I'll leave you with a   sunny, colourful picture of Whitby, because I don't want to leave you with the impression it is a spooky, gloomy, depressing place. In the morning it was grey and slightly bleak, but look at how gorgeous it turned in the afternoon! 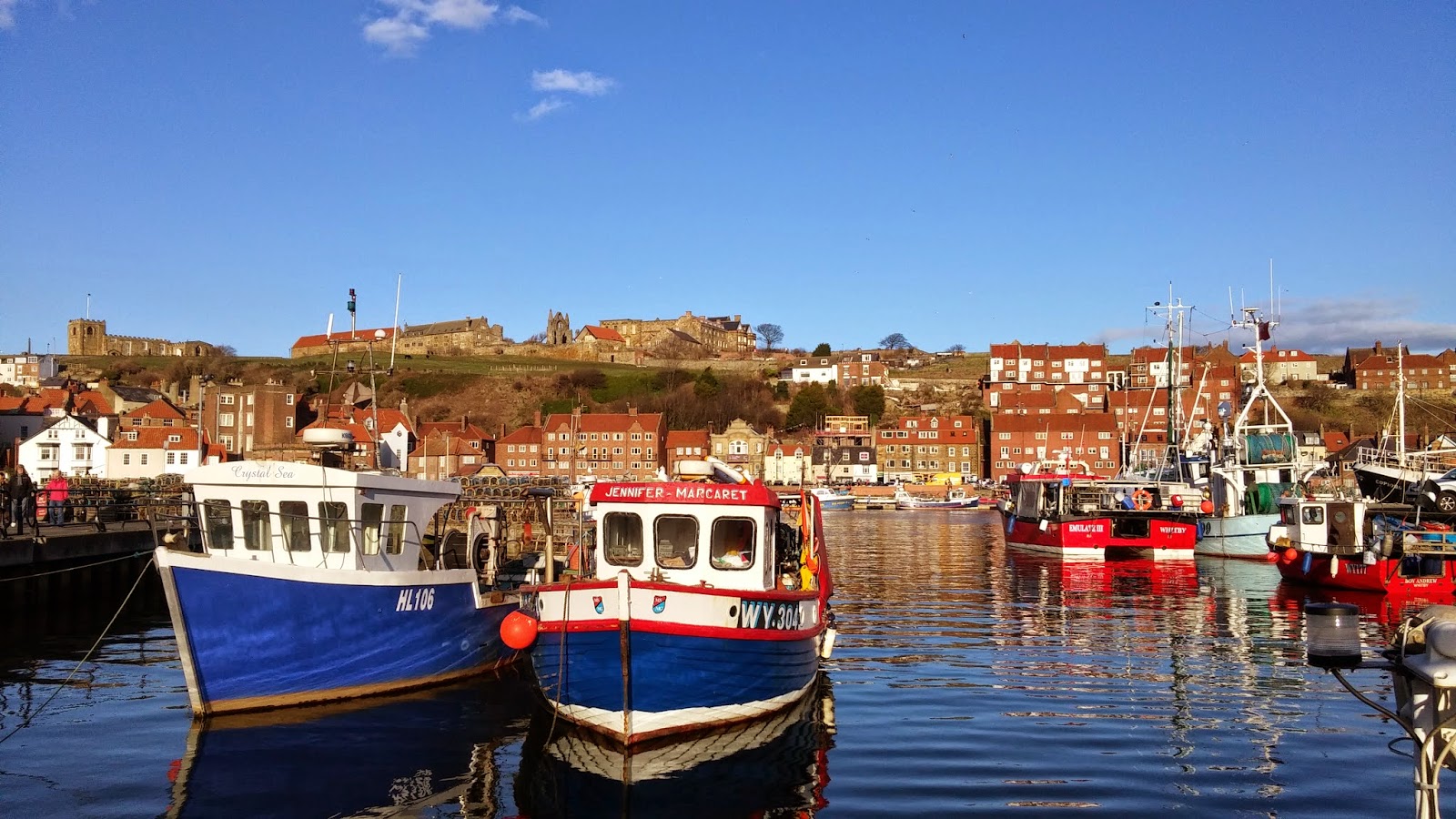 And what about having a look at Robin Hood's Bay? No actual literary connection, neither with the legendary hero it takes its name from, but it is not so far from Whitby and it is such a beautiful, peaceful place!