It was on British ITV last autumn and now, on January 18th 2015,  it will premiere in the US, thanks to PBS Masterpiece. A real feast for all our American period-drama-loving friends  who will enjoy this new 6-part drama series , Grantchester, on the same night as Downton Abbey 5. Each Sunday night they will move from Yorkshire to Cambridgeshire and will follow the adventures of their old and new English heroes and heroines comfortably sitting in their armchairs. Two hours of pure Englishness!

Set in 1953 in the surroundings of  Cambridg, Sidney’s unlikely partnership with gruff, down to earth Geordie is central to the story.  Geordie’s methodical approach to policing complements Sidney’s more intuitive techniques of coaxing information from witnesses and suspects. They are partners in crime and forge a true friendship as each offers a different insight into the crimes they begin to unravel.

Sidney Chambers, the protagonist,  is a tormented character and a handsome young man. A vicar who is really like any other young man:  he deals with jealousy, career, ambition, drinking too much, loving a woman he can't have, he likes jazz music and  meeting his friends at the pub.
As a WWII veteran,  Sidney has to cope with what we now call PTSD symptoms and with a baggage and  a sense of guilt which are increased by the fact that he judges himself in the eyes of God.  He fought and did things he is not proud of, but now he face his fears thanks to his faith though  often finds solace in alcohol.
The 50s are an interesting setting. That was a time of  great social and political change and Sidney is open to change and ready to help and understand.


I've seen it and love it. I can just suggest: don't miss it!
“As a priest, isn’t everything our business? There’s no part of the human heart which is not our responsibility” – Sidney Chambers 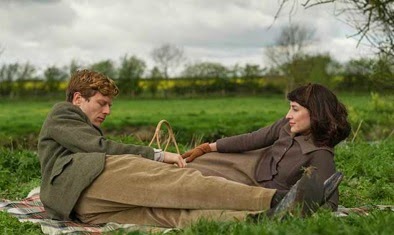 Episode 1 opens with Sidney (James Norton) who has lost track of time, having spent a glorious morning with his fun loving friend, and the woman with whom he is secretly in love, Amanda Kendall (Morvern Christie). Racing to church, Sidney arrives just in time to minister at the funeral of a local solicitor - although his poor time-keeping earns the disapproval of his punctilious housekeeper Mrs Maguire (Tessa Peake-Jones).

With the death a suicide, Sidney does his best to comfort young German widow Hildegard Staunton (Pheline Roggan), but is soon called away from his normal duties when the glamorous Pamela Morton (Rachel Shelley) asks to draw Sidney into her confidence. She reveals that she was having an affair with the late solicitor – and that far from being a suicide, she has reasons to believe that he was in fact murdered.

With Pamela unable to go to the police, she asks Sidney if he would be able to look into the matter for her – after all, people confide in vicars, don’t they? However, Sidney’s investigation quickly draws him to the attention of grumpy local DI Geordie Keating (Robson Green), who doesn’t really appreciate the clergyman sticking his nose into things he doesn’t understand. But Sidney isn’t to be shaken off too easily – particularly when he begins to uncover evidence that the suicide was staged.

However, whilst Sidney is focused on getting to the bottom of the alleged murder, his own world is shaken apart when he receives news that Amanda has got engaged – it seems that Sidney has missed his moment. With his heart breaking, and his theory about the murder seemingly coming up short, will Sidney be able to work out who killed the solicitor before the killer strikes again?

Grantchester will return on ITV in 2015 for a second series