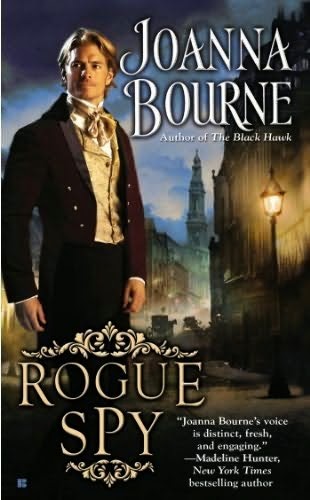 
The signs were all there: anticipation and the thrill of the hunt (just imagine my increasing anxiety until I was able to locate a B&N bookshop in Manhattan – too few bookshops left there, IMHO!); the awareness of being hooked from the very beginning – “The end of her own particular world arrived early on a Tuesday morning, wrapped in brown paper and twine, sealed with a blob of red wax”; the unusual desire to lengthen the pleasure of reading by stopping before I really wanted to; the frequent re-reading of entire pages; the feeling of emptiness when the book was over; the lingering sense of bliss even days after I finished reading; the compelling need to tell someone about it...
And what’s more, it happened AGAIN within a matter of months! I already felt that way last spring, when I devoured Joanna Bourne’s Spymasters series all in one swallow, ending with The Black Hawk. At the time, I resisted the impulse, but this time I simply couldn’t. Also because the authors I usually feel inspired to congratulate happen to be dead for a long time, centuries sometimes, and it is a privilege to be able to do so with someone who’s not only very much alive, but also friendly available to readers through her own website and even a Twitter account! What a temptation!


I have always liked Spy stories and historical novels: the addition of a bit of romance is very welcome, but not necessary. The mixture can be (it usually is) very dangerous for a writer to handle, and the models are quite hard to compare with. I’m thinking of classics like Dumas’s Opera omnia, Orczy’s The Scarlet Pimpernel, Dunnett’s Lymond Chronicles and such. That’s why I admired Ms Bourne’s ability to blend the ingredients together creating her personal mix, with the addition of witty dialogue and insightful presentation of the characters’ psychology which I have seldom (if ever) happened upon. The characters, the main ones as well as the minor, are so cleverly portrayed and expanded,  that they immediately start to grow on the reader: you can’t help actually caring for them. That’s because you can follow their thoughts, not being just a witness of their actions. Ms Bourne handles their background stories very cleverly, moving to and fro along the whole series – this is the 6th book of the series (including Her Ladyship’s Companion, because of Hawker’s ‘cameo’). Ah, Adrian: how couldn’t we love him? Looks like the Author herself can’t let him off: even if other (major) characters don’t appear in every novel, Adrian “Hawker” Hawkhurst is always there - at various stages of his interesting and complicated life – and smart, witty, lethal and good-looking as always. Not flawless, mind you: but that’s another reason why we like him.

As you may have guessed ;-), English is not my mother tongue. Nevertheless, I’ve been lucky to be able to read the series in its original language. The Italian rendition is quite disappointing, actually. The Author’s admirable attention in recreating the historically accurate settings and language is lost in a careless and hasty translation, disrespectful towards the continuity because every novel has a different translator, all of them mainly worried about the deadline for the publication. I know that from a couple of Bourne’s novels in Italian that are partially available via G-Books: I couldn’t get the actual books because in Italy they are published by a sort of Mills & Boon firm and thus compared to periodicals, sold only at the newsstand (not in bookshops!). This is why libraries don’t keep them since technically – because of their circulation - they are considered as a sort of grey literature: such a pity!

Back to Rogue Spy: this time it’s Pax’s story we are going to read,  a character we’ve already met in a minor role in at least two novels. The plot is fast-paced, utterly believable and full of twists; I’ve especially appreciated the historical accuracy of every detail and the follow-up of the intriguing topic of the cachés. I didn’t expect Hawker as a co-star, and to me it’s been a surplus value. I was also very happy to catch what I imagined was an unespected glimpse of Grey (missing since the first novel), and,  further on,  I found myself grinning widely at his reaction to Pax’s ‘situation’: so typical Grey! As for Galba, the ‘M of Meeks Street’, after all these novels I believe he deserves his own story. I know I’m now playing the pathetic reader, but I sincerely hope Ms Bourne won’t give up spies, or,  at least, not before telling us Galba’s story. I promise,  I won’t ask for more Adrian – besides, chronologically he couldn’t fit in any of Galba’s past adventures – but I’m craving to read how Mr. Jones met the Fluffy Aunts. Can’t you see? They need a story, they scream for their story to be told, possibly set in wonderful English/French 18th century locations: we know even the C18 costumes are much more awesome than the dull C19 ones :)

Ten years ago he was a boy, given the name 'Thomas Paxton' and sent by Revolutionary France to infiltrate the British Intelligence Service.  Now his sense of honor brings him back to London, alone and unarmed, to confess. But instead of facing the gallows, he's given one last impossible assignment to prove his loyalty.
Lovely, lying, former French spy Camille Leyland is dragged from her safe rural obscurity by threats and blackmail. Dusting off her spy skills, she sets out to track down a ruthless French fanatic and rescue the innocent victim he's holding — only to find an old colleague already on the case. Pax.
Old friendship turns to new love and Pax and Camille's dark secrets loom up from the past. Pax is left with the choice — go rogue from the Service or lose Camille forever.

Joanna Bourne writes historical fiction set in Revolutionary and Napoleonic France and Regency England,  a time of love and sacrifice, clashing ideals, and really cool clothing. Joanna lives in the Appalachian Mountains with her  family and her dog and cat. 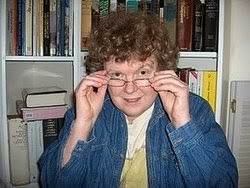 So sad the books aren't widely available in Italy.