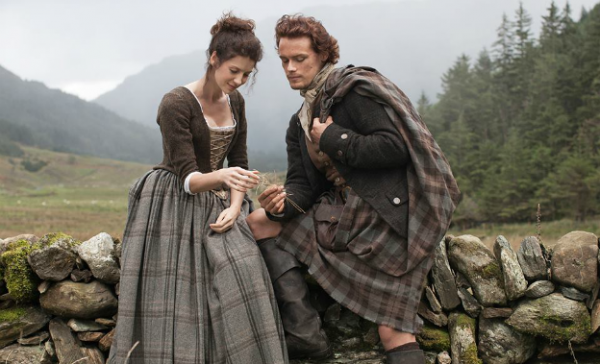 Outlander, based on Diana Gabaldon's best selling saga,  premieres on Starz on August 9th. Sam Heughan - 6' 3" of Scottish handsomeness -  wears Jamie Fraser's kilt and boots, while dark beauty Caitriona Balfe is Claire Randall,  a married combat nurse from 1945,  who is mysteriously swept back in time to 1743 and ends up caught in the dangerous events that will lead to the Jacobite rebellion, but also in the protective arms of young Jamie.
If you haven't read the books yet, at least the first one in the series, it may sound quite a confusing story, but I'll assure you,  it won't be once you familiarize with its gripping plot and characters.
In the cast also a few familiar faces, like Tobias Menzies (Game of Thrones, Rome, Spooks) and Graham MacTavish (The Hobbit).

I'd say, summer is here, hence ... Grab your copy of Outlander before it arrives on the screen, that's my recommendation. As for me, I'll have to revise and refresh my memories. It's been a while since I read it (my review).
Visit the official site to discover more about this upcoming series, watch a preview here and take note: 9th August US Premiere! 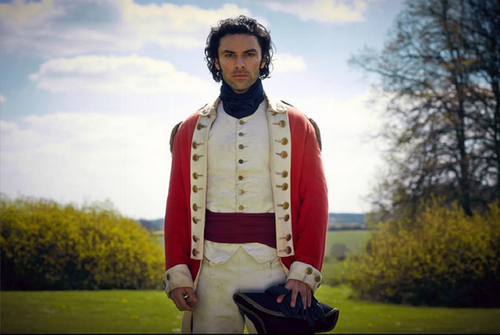 Another upcoming TV drama based on historical fiction set in the18th century is BBC Poldark .


The story begins when Ross Poldark returns to Cornwall from war, looking forward to a joyful homecoming with his family and his beloved Elizabeth. But instead he discovers that his father has died, his home is overrun by livestock and drunken servants, and Elizabeth, having believed Ross dead, is now engaged to his cousin. Ross must start over, building a completely new path for his life, one that takes him in exciting and unexpected directions...

I was fond of the original series of Poldark when it was broadcast lots of years ago on Italian TV and I was just a teen. I can't forget how excited I was waiting for any  new episode and that the series ignited my already born interest for everything British. Now I'm waiting for the new BBC series with renewed interest and many expectations, of course.  The remake, which they are shooting now in several different locations between Cornwall and Bristol, stars Aidan Turner (The Hobbit, The Mortal Instruments City of Bones, Being Human, Desperate Romantics) and Eleanor Tomlinson (The White Queen, Death Comes To Pemberley) as Ross Poldark and Demelza and I'm ready to bet on them both though Robin Ellis and late Angharad Rees will always remain in my heart for the incredible emotions they gifted  us with their performances.

The new TV drama is due to be broadcast in 2015. Time to rewatch the old series or to read the book series written by Winston Graham.

Among the period drama series which have been renewed for a second season and which I'm looking forward to, BBC The Musketeers and CW Reign. The cast of the first one, after loosing Peter Capaldi (Doctor Who)  and acquiring Marc Warren (The Good Wife),  is quite busy,  shooting the new episodes in Prague. By the way, don't forget The Musketeers will premiere on BBC America on June 22.
As for Adelaide Kane, Toby Regbo, Torrance Coombs & co., they are enjoying a gap period,  rest and holidays for them,  while waiting to be back on set in July. Latest news from Reign is that actor Jonathan Keltz, playing Leith Banyard, has been promoted and will be a series regular for season 2.

What will the new season bring to the fans of the two series?  You can follow the updates and hope in some anticipations coming from the twitter and instagram accounts of  the protagonists themselves (Luke Pasqualino D'Artagnan, Ryan Gage King Louis, Adelaide Kane Mary Stuart, Toby Regbo Prince-now- king Francis and Torrance Coombs Bash),  of BBCOne or  CW Reign.

What are the new costume series you are most eager to see in the next season?
Posted by Maria Grazia at Friday, June 06, 2014
Email ThisBlogThis!Share to TwitterShare to FacebookShare to Pinterest
Labels: Costume drama, From Books to Movies, Outlander, Period Drama, Poldark, The Musketeers, The Musketeers 2, tv series

I have Outlander on my calendar for August--cannot wait! Also looking forward to Poldark--I have the first novel on my tbr list for the summer.

Still waiting to see Musketeers 1--can't seem to find it, probably operator error on my part.

So much great historical drama these days--a wealth of shows to enjoy.

I really need to read Outlander and Poldark, don't I? So many books, so little time...

Dear Jane, The Musketeers are going to premiere on BBC America on June 22. Have a look at http://www.bbcamerica.com/musketeers/ to discover more.
You are right, there is a lot of period drama coming our way and also still currently on. I have been watching two other series, and I'm going to write about them once they are over. It's quite a happy period for historical drama lovers.
Thanks and enjoy your weekend :-)

Hello Trudy, thanks for dropping by and sharing with us. What can a fond reader with an endless TBR list tell you? Summer is here, lessons are over and the pressure of the daily routine relieved. I really hope I'll be able to read more. You reminded me I haven't read Poldark yet... should I? Oh no! My list grows any minute. I'll never catch out. Cheers!