ADDING REALISM: ARE SOME PERIOD MOVIES TOO GORY?

Like any other entertainment genre, there is a certain following for gory horror movies. While some may not understand why the need for such detail is attractive for many, the amount of "blood" within a movie can suggest its popularity with those that enjoy the...entertainment. However, some movies were critically acclaimed by using the gore to add realism when telling a story. This is especially true when developing period specific movies that have undertones of being true.
Gore in the War - The opening scenes to "Saving Private Ryan" demonstrated how bloody the Second World War actually was. Involving an almost artistic style to creating a realistic effect, the movie depicted parts of the war that are commonly overlooked. It was more than explosions of tanks and planes going down in the ocean. The movie provided a taste of what it would be like to be faced in similar situations through the 1940s in Europe. In this respect, the blood and displayed internal organs moved from the impact of "gore" to that of "art." However, was this gore viewed more artistically simply because it was a movie about World War II? 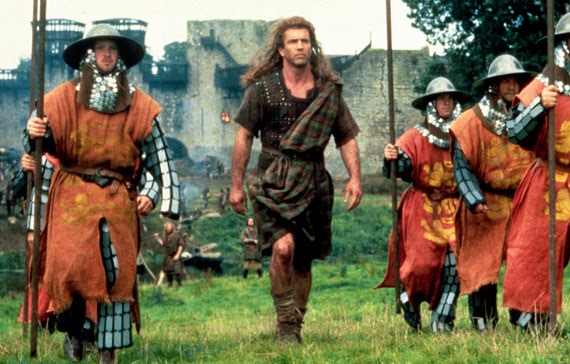 Swords and Shields - Another movie that scored well with a wide audience was the film, "Braveheart." Although some people had reservations about Mel Gibson playing the Scottish warrior William Wallace, the movie still won over many fans. In this portrayal of the 13th century, the battles that were raged were violent and the film was very visual with the amount of blood and dismemberment that happened during that period of time. Like the example above, the gore in this movie moved more towards art.

Action Movies - When it comes to realism within a movie, are people conscious of what they are actually seeing, or are they focused more on why a movie has to be so violent? In the movie, "300," the blood and violence was quite gratuitous. While this movie wasn't accepted nearly as well as the first two examples above, that period of human history wasn't the most pleasant. The landscapes were constantly at war and most battles were gruesome considering the weaponry of the time. As "300" was developed more for action than drama in comparison to the above examples, the amount of gore present turned many away. It seems that many who enjoyed the first two examples above couldn't get past the gore of this particular movie - although it has basis for fact as King Leonidas did fight the Persian army with approximately 300 soldiers.

The Undead - Although zombie movies are not exactly period specific, no other genre can show as much blood as any title than, "of the Dead." For those that follow the occult classics, this gore is indeed art, although many more would disagree. However, who are those individuals to say that a zombie apocalypse wouldn't be that bloody?

Is adding a more in-depth dramatic story key to transforming gore into art? Can you think of an action movie that was covered in blood that did well for the general populace? While some film makers add blood and gore for no other reason than to pique the interest of a particular audience, some will do so in order to demonstrate the realism of actually being present during those situations. Could the aversions to films such as these be caused by society's blissful ignorance to the fact that life can be incredibly bloody? Perhaps you don't want to be reminded of your own mortality when looking to be entertained.


Ken Myers is a father, husband, and entrepreneur. He has combined his passion for helping families find in-home care with his experience to build a business. Learn more about him by visiting @KenneyMyers on Twitter.
Posted by Maria Grazia at Friday, June 13, 2014
Email ThisBlogThis!Share to TwitterShare to FacebookShare to Pinterest
Labels: 300, Braveheart, Guest bloggers, Movies, Period movies, Saving Private Ryan, War movies