THE FOREST LORD SERIES: THE WOLF AND THE RAVEN BY STEVEN A. MCKAY - AUTHOR GUEST POST & GIVEAWAY

Steven A. Mc Kay was my guest back in September 2013 with an interview in which we discussed the first instalment of his The Forest Lord Series, Wolf's Head and his choice of writing a new saga focused on an old legend: Robin Hood. Steven is my guest again to present his new book, The Wolf and the Raven and to give you the chance to win a copy (book or audiobook at winner's choice). Read the post and good luck in the giveaway contest!

The Forest Lord series, so far, comprises two novels: Wolf's Head and The Wolf and the Raven. They are my take on the age-old Robin Hood legend, written in a modern style, with plenty of action and adventure while still (hopefully) being historically accurate and closer to the “true” Robin than any of the fictional versions that have been done before. Be warned though, this version of the legend is not for children – there's a lot of violence, bad language and the odd bit of sex. Just like real medieval life!

I had originally planned the series to be a trilogy. Everyone likes a trilogy – it's a “beginning, middle and an end”, just like a good story should be. But I'm not the kind of author who plans every scene in advance, far from it. So, when I sat down and started to write the second book I was pleasantly surprised to find two of the characters taking the story off in a completely unexpected direction. When your characters are so powerful they dictate where the plot should go, it's a good idea to let them run with it and so...I ended up with a novel I hadn't expected in The Wolf and the Raven. Much of it sits outside of where I wanted to take the Robin Hood legend, which is great, but it means I still have two books worth of stuff to write!
The trilogy has, then, become a tetraology – four books, rather than a nice, neat three. Well, that's the plan, but who knows what'll happen once I really get writing the next book?

The mythical nature of the characters, with their near-preternatural fighting skills, is offset by the realism of the harsh medieval setting and readers seem to be greatly enjoying things so far, with both books hitting the number 1 spot in Amazon's “War” chart and Wolf's Head reaching the UK Kindle Best-Sellers overall Top 20. Not bad for a self-published series less than a year old...

Please take a look at the links, listen to the sample from the audiobook and enter the giveaway for either a signed copy of the new book, The Wolf and the Raven or a free download of the Wolf's Head audiobook – your choice!

Steven A. McKay
About the author 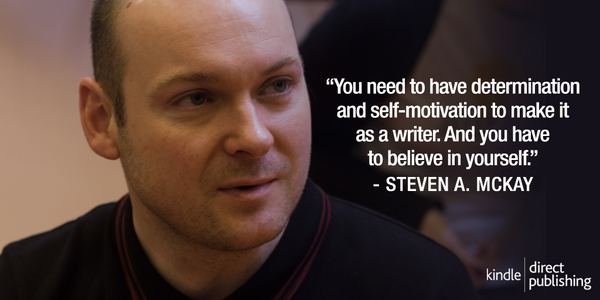 Steven A. McKay was born in 1977, near Glasgow in Scotland. He lives in Old Kilpatrick with his wife and two young children.
His second book, The Wolf and the Raven was released on April 7th, at the London Book Fair where he was part of the Amazon stand. His début novel, Wolf's Head, was also released the same day as an audiobook.
Wolf's Head is a Kindle top 20 best-seller while The Wolf and the Raven was the “War” chart number 1.

He plays lead guitar in a heavy metal band when they can find the time to meet up.

Listen to an audio sample from Wolf's Head

Welcome Steven, I enjoyed the first book and who like to know what happens next - I always interested to hear that books have a life of their own when the author starts writing

I enjoyed this post; interesting to think how a book can change directions. I've read other Robin Hood novels, always anxious to see a new interpretation. Thanks for the giveaway.

Has to be the most exciting robin hood story to date. Absolutely fantastic,