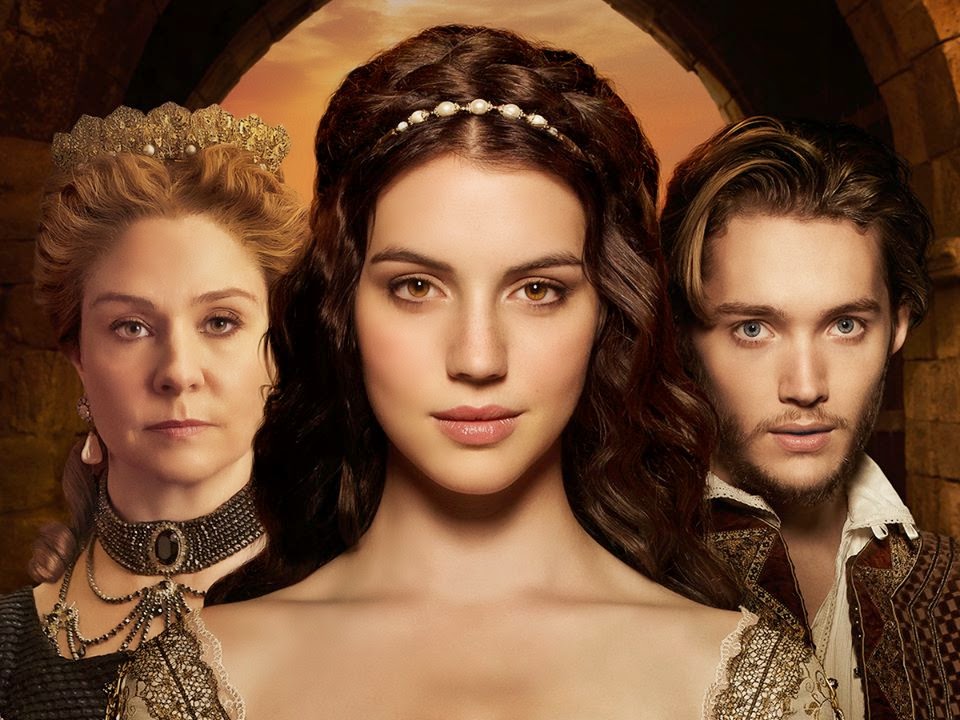 Reign: when history becomes a fairy-tale

This series recently wrapped at its 22nd episode after being on US CW Network for months . Though far from being historically accurate, Reign kept faith to the gist of the true history of Queen Mary Stuart and her life at the French court,  as the betrothed of Prince Francis, Dauphin of France. The two royals  were actually married for one year, until he died very young of an infection.
It is a smart series that winkles at teenage  and young audiences with   captivating photography, a somewhat-anachronistic soundtrack, doll-faced actors and actresses, intriguing love stories and a bit of sex, supernatural events and magic, wicked villains and gorgeous costumes. I am definitely not intended demographic, but I liked it,  anyhow. Well acted and well written, the show caught me at first sight.

I was ready to use my supply of tissues for the season finale but ... we still have to wait for lovely Prince Francis's fate to be accomplished. We'll see him crowned as King of France and still married to Mary of Scotland at the beginning of season 2. But their lives are haunted by Nostradamus's visions and by an epidemy of plague.
The cast is soon due to be back on set to shoot season 2. Looking forward to seeing Adelaide Kane, Toby Regbo and Torrance Coombs reprise their roles as Mary, Francis and Bash. 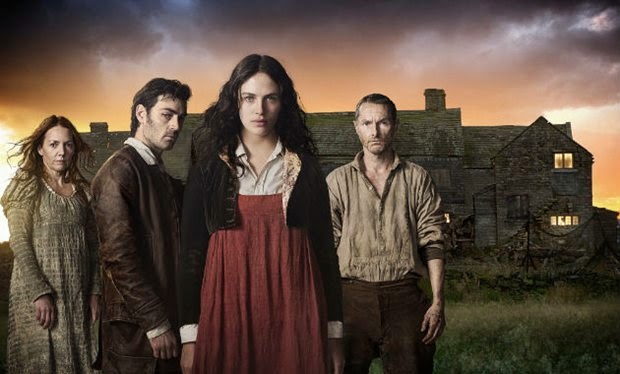 Haunting story of mystery, violence, prepotence and bigotry in a gloomy Cornish environment, Jamaica Inn is set in 1821 and based on a gothic novel by Daphne Du Maurier.
It tells the story of Mary Yellan (Jessica Brown Findlay, Downton Abbey, Labyrinth) who moves to her Aunt Patience's (Joanne Whalley) after her mother dies. Aunt Patience lives under the spell of her husband, Joss Merlyn (Sean Harris) at Jamaica Inn. Mary soon realises that the inn has no guests and it is being used as the hub of Joss' 'free' trade. Mary becomes attracted to Jem Merlyn (Matthew McNulty, The Paradise, The Mill), Joss's  younger brother who is a  thief. Her life is suddenly changed into a series of dangerous, frightening series of events. But Mary meets also Reverend Francis Davey (Ben Daniels, The Paradise), the parish vicar, and his sister Hannah (Shirley Henderson) and they are ready to help the poor girl ...
I've read a lot of negative remarks addressed to BBC for the bad acting and bad  audio quality  of this miniseries but, I honestly didn't find it so bad. I liked it quite a lot. It kept me hooked and willing to discover whodunnit all through the episodes. Bad acting? I didn't get that impression at all. Bad audio? I used subtitles, English subtitles and, as a non mother-tounge watcher, I often use them. This time they were more useful than ever, probably. If you like thrillers and period drama, you should give it a chance.


New Worlds: when Christian Grey was a brave republican rebel 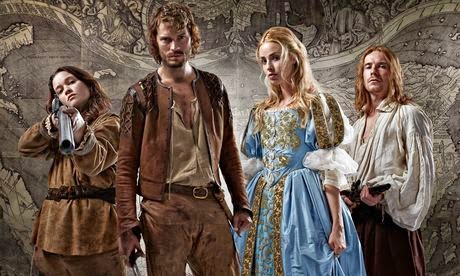 Who's Christian Grey? He's the protagonist of the hugely buzzed about trilogy of books, Fifty Shades of Grey, which is due to become a new romantic franchise with the first movie out on Valentine's day 2015. The hero of Channel Four New Worlds, Abe Goffe, is played by Jamie Dornan, nominated for a BAFTA this year as male lead in The Fall  and,  by chance, the actor who accepted to bring Christian Grey to the big screen. If he is as good as he is as Abe Goffe or Paul Spector in his interpretion of Mr Grey, he will be extremely dangerous for female audience's poor hearts.
Because, you know,  he was really the charmer as the young, roguish, idealistic renegade  determined to make England a true republic in New Worlds. But Jamie Dornan was not the only reason why I liked this miniseries. It is a great production for many reasons. For example, the rest of the main cast was also very good. Freya Mavor as Beth Fanshawe, Joe Dempsie as Ned Hawkins and  Alice Englert as Hope Russell delivered brilliant performances and contributited to the success of the show. I could barely recognize Jeremy Northam as King Charles II, but he didn't have such a huge role in the story and I remembered him as the romantic lead in Emma or An Ideal Husband, so I may be forgiven.

New Worlds is a gripping historical drama set in the turbulent 1680s and   meant to be sequel to The Devil's Whore , which takes place, instead, during the Civil War and stars Peter Capaldi, Dominic West, John Simm and Michael Fassbender. According to writers Martine Brant and Peter Flannery, the drams's key theme is youthful idealism and Dornan himself said in an interview that this is the reason why young watchers would easily relate to the protagonists of the show, which proposes adventurous,  intriguing plots and fascinating characters fighting for their ideals on both sides of the Atlantic

For some reason, Reign never really appealed to me. I know that Mary, Queen of Scots is often portrayed as a romantic fool to EI's icy pragmatism, but I've always disliked her.

Jamaica Inn, on the other hand, is right up my alley and I hope to see it this summer. I have yet to find out when it will be aired in the U.S.

New Worlds also looks great--a time of history I like but which is rarely covered in historical dramas.

I hope you get to see New Worlds and Jamaica Inn, Jane. They are really worth seeing.
Thanks for dropping by and commenting :-) Hugs xx