WAITING FOR THE OSCARS: WHICH ONES HAVE I SEEN? 12 YEARS A SLAVE, HER, THE GREAT BEAUTY 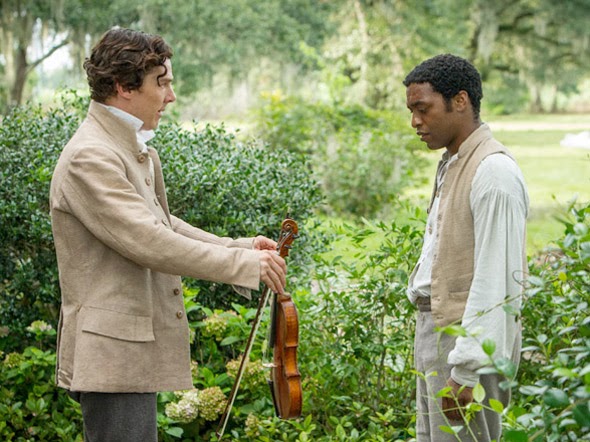 Oscar Weekend is finally here! The 86th Annual Academy Awards air live tonight Sunday, March 2, at 8:30pm ET/5:30pm PT on ABC, hosted by Ellen DeGeneres.
Have you seen any of the nominated movies? I've seen only: 12 Years A Slave, Her, The Great Beauty.  What about you instead? Looking forward to tonight's show,  where some of the anxious nominees will become excited winners, let's discuss these three movies which are among them.


The true terrible story of Salomon Northup, 12 Years a Slave,  is a movie based on an incredibly touching account of one man's fight for survival and freedom. Salomon is a free middle class black man living in North America, a musician, when he is deceived, kidnap and forced to live as a slave for twelve years.
As in other of his films - Hunger or Shame for instance - director McQueen wants the audience leave the theatre disturbed and upset. No censorship, no filters: the ugly truth is there in all its tragicality, it hurts, it shocks, it makes you sorrowful. Neither the happy ending can relieve you from the sense of loss and brutality you experience watching this movie.

Why should you watch it, then? Because it is a brave movie and because we can't avoid facing the awful truth which characterizes our common roots, our past and recent history. We must come to terms with the fact that evil and wickedness have always been part of human history, even if it is as painful as a whiplash. Evil seems genetically part of the human race and avoidance is no cure. Better to look it into the eye, learn to recognize it and  face it.
The second and third reasons why you should see it are Benedict Cumberbatch and, especially, Michael Fassbender. Fangirling apart, their characters are really thought- provoking: Cumberbatch is William Prince Ford, a relatively benevolent master, but one you are brought to despise for his hypocrisy. I can accept and even  rationally and bleakly justify Michael Fassbender's devilish Edwin Epps more than Cumberbatch's Master Ford's false benevolence. At least, Epps believes his right to abuse his slaves is biblically sanctioned, and encourages the slaves to accept their biblically-sanctioned fate reading them sacred book .Fassbender is great at playing this character. He is what makes this movie so painful, more than Chiwetel Ejiofor, who is of course, moving as Salomon. 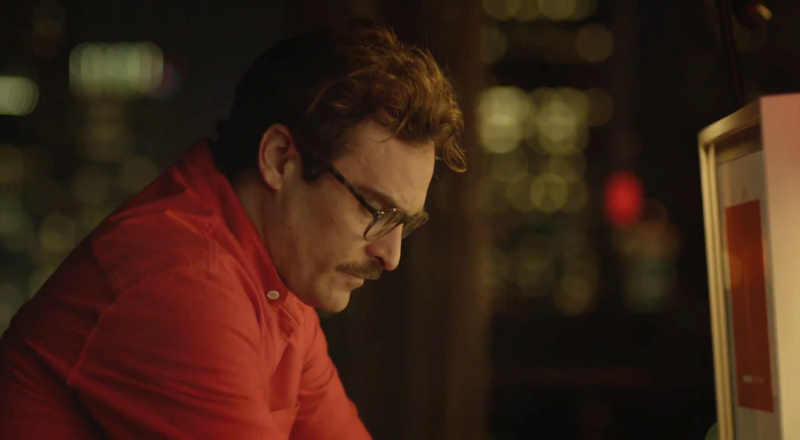 "The heart’s not like a box that gets filled up. It expands in size the more you love"

I thought I wouldn't like a movie about the invasive effect of computers in our life, I thought I could never sympathize with a man who falls in love with his computer operating system. But I was wrong, definitely and completely wrong. I was moved to tears by this original, bizarre tale about feelings and emotions that are what makes us human. It is a real love story, a story of  true love,  told through  a sensitive approach  and set in a dystopian  future world not so different from ours.

Joaquin Phoenix is  Theodore Twombly. Melancholic, divorced, once in love with his wife.He spends his long working hours writing letters by people to people. He is paid to do that because incommunicability characterizes interaction among human beings in that world. His terribly sad life changes when he buys a new revolutionary OS for his computer, which is capable of reasoning and relationship. He calls it Samantha and a menage that will astonish you and move you at the same time will start between them
I thought I wouldn't like it, instead,  among the three films Oscar nominees I deal with in this post, it is definitely the one I like the best. You know,I can't resist romance. And this is the weirdest and most imaginative I have ever seen. Kudos to Spike Jonz for a brilliant screenplay and an unforgettable movie.
.

I had to see this film, it was in my to be seen sooner or later list, but I did it immediately, after it won the Golden Globe and the BAFTA as  a film in the Foreign Movie category. It is long, disturbing, surreal, with a fragile plot but definitely thought-provoking. I spent most of the watching time struggling against the unpleasant thought of foreign viewers watching it and thinking about us, the Italians: are there really Italians like these,  who could live surrounded by such amazing beauty - Rome - and be so perversedly shallow and useless and ugly?

Sorrentino's depiction of certain Roman society, 50 years after La Dolce Vita, is so cruel and so depressing ! The lives of the privileged, on the brink of desperation,  shipwrecked in a sea of money and falsity, are nothing amusing to see. With a huge cast of great Italian actors, this movie is not what I expected to see representing our country in international film venues. I'm proud of Sorrentino's work, less proud of what Sorrentino tells and describes in his movie: Rome is beautiful, a great beauty, but those lives in it are senseless and mirthless, incapable of finding peace and truth.


If you want to follow the show of the Academy Awards tonight, you'll find it in streaming at imdb.
Posted by Maria Grazia at Sunday, March 02, 2014
Email ThisBlogThis!Share to TwitterShare to FacebookShare to Pinterest
Labels: 12 Years a Slave, From Books to Movies, Her, La grande bellezza, Movies, Oscar nominees, The Great Beauty

I have only seen 12 Years a Slave so far of the Oscar picks. It was riveting and painful with many stand out performances. I love historical films and this one should be a necessity to watch.
I would have loved to have seen a few more films but unfortunately my few forays into the city didn't leave me with enough time (especially since I watched The Hobbit twice!)

Hello Phyllys! Glad to hear from you. You're right, 12 Years a Slave is a must for historical films fans. I've seen several films recently but, I must confess, I couldn't go and see The Hobbit back in December and still have to see it. Of course, I guess you liked it since you saw it twice! Thanks for dropping by and commenting. MG