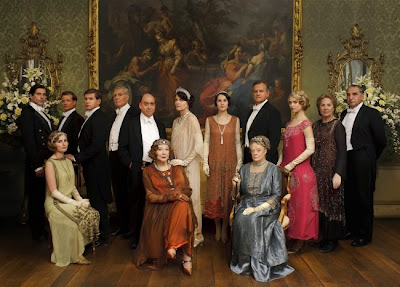 Happy Christmas Time, everyone and all! It'll be a happy time, I'm sure, especially for  my fellow period drama fan friends.
Aren't you as excited as I am to know we'll find these very precious gifts under our Christmas trees?

Shirley MacLaine will be back as Cora's mother and Paul Giamatti will join the cast as her brother. The episode will also feature James Fox as Lord Aysgarth, Guy Williams as King George V (the grandfather to reigning Queen Elizabeth II) and Oliver Dimsdale as the Prince of Wales (Edward VIII, Queen Elizabeth's uncle).

Apparently,  it won't be Christmas during the episode. It's actually the summer season and the Crawley family will head to London for Rose's coming out. Viewers will get to see the Crawleys' impressive London residence, Grantham House, for the first time and will also be treated to Buckingham Palace!

There will be a series of galas and parties as Lady Rose is presented to society, while a scandal will threaten to engulf the British monarchy and Robert Grantham will be forced to act to protect both the royal family and his own. 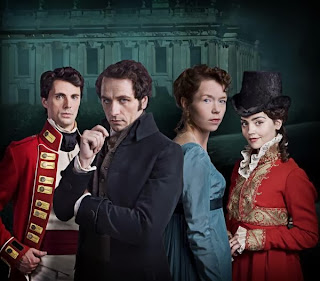 The second period drama gift airs on Boxing Day, or better on Boxing night on BBC1. On 26th December we will finally see Death Comes to Pemberley, the mini-series based on P.D. James's sequel to Jane Austen's Pride and Prejudice.

I read the book and only mildly liked it when it came out but I'm looking forward to this new costume drama hoping it could be good despite my low expectations. The pictures and the clips look gorgeous and  , you know,  Matthew Rhys as Darcy, Anna Maxwell Martin as Elizabeth and Matthew Goode as Wickham lead a really promising cast.

Elizabeth and Darcy, now six years married and with a young son, are preparing for the lavish annual ball at their magnificent Pemberley home. The unannounced arrival of Elizabeth’s wayward sister Lydia, however, brings an abrupt and shocking halt to proceedings when she stumbles out of her chaise screaming that her husband Wickham has been murdered.
Darcy leads a search party out to the woodlands, and when they discover the blood-smeared corpse not of Wickham, but his traveling companion. Suspicion is at once aroused. The dramatic and unnerving events of the evening have shattered the peace both of the Darcys and of Pemberley, and as the family becomes caught up in the ensuing murder investigation, a mysterious web of secrets and deceit will threaten all that the Darcys hold dear...

A very happy Christmas to you from sunny Sri Lanka!

Had such high hopes of the book - Death comes to Pemberley - but really disliked it, as I thought it was really badly written, and the plot too simplistic for any author but especially of someone of the calibre of PD James

Merry Christmas from the USA!

I wish you a merry merry Christmas dear MariaGrazia!
I watched only the first Dowtown Abbey's season, has every season a Christmas special? Hugs!