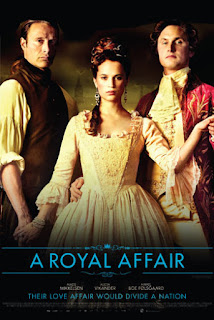 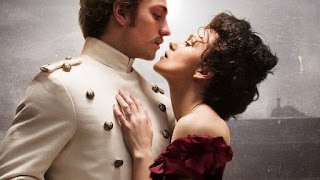 (I used Grammarly to grammar check this post, because even good English teachers aren't perfect!)

I've been watching (or re-watching) several different movies lately, some very good ones too.
After depressing hard-working days, wrecked and exhausted, I've found some solace in very beautiful stories ( or in shallow romances if not in silly comedies!)
I've chosen a couple of good ones to share with you and write about: A Royal Affair and Anna Karenina.  They are both costume movies and stories of women prisoners of a male-oriented world.  For similar  reasons the two heroines suffer exclusion, condemnation and solitude before their lives end tragically.  I was touched, moved and emotional most of the time while watching, but grateful for the great emotions they gave me. I could deeply relate with the protagonists and forget myself for a while. 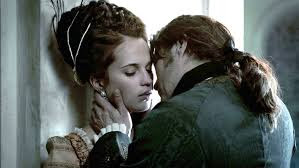 A Royal Affair  (2012) is the account of the true facts which took place in the 18th century at the court of King Christian VII of Denmark,  narrated from a female perspective.  We have a retrospective view on the facts - strongly saddened by the anticipation of an upcoming tragic epilogue -  which are told directly by the disgraced heroine, Caroline Matilda of Great Britain. The film starts with the exiled queen writing letters to her distant children, whom she knows she will never see again.
She married the mentally ill young monarch of Denmark and betrayed him with his enlighted chancellor, friend and personal surgeon, Johann Friedrich Struensee. She is now exiled from the court and banished from any meeting with husband, daughter and son. When she arrived in Denmark, she was ready to be a good wife for her future husband and a good queen for the realm, but had soon discovered the impossibility of making  that dream come true. She had been doomed to solitude and unhappiness, prisoner of her position, and victim of rules, conventions and even censorship,  which prohibited her to read the books she had brought with her from England. 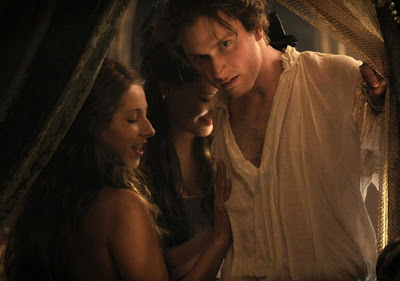 I can't explain how beautiful this film is. You must see it. I saw it in Danish with Italian subtitles and I couldn't imagine I would get so emotional. It is a great movie, intense, thought - provoking and beautifully shot. Of course,  I was blown away by  the passion of the forbidden love affair between the queen and the doctor,  nonetheless I was constantly feeling for the young insane king Christian too.
The cast was all great but the performance of Mikkel Boe Følsgaard  as king Christian was simply outstanding.
Mads Mikkelsen as Doctor Struensee and Alicia Vikander as Caroline Matilda were awesome as the enlighted passionate leaders of an extraordinary season of reforms in Denmark and so touching as the tragic protagonists of the unforgettable love story. Have a look at  a clip and a trailer of the movie to have a visual hint of what I've tried to explain with words.

In Anna Karenina (2012) Keira Knightley and Joe Wright work together  for the third time, respectively  as leading actress and director. It was something I couldn't miss. Especially because I loved both their Pride and Prejudice (2005) and Atonement (2007). Moreover, could I miss the chance to see Mr Darcy and Elizabeth Bennet together again? (though only as siblings this time). No, I didn't want to miss Matthew MacFadyen and Keira Knightley together again.
Unfortunately, my enthusiasm faded away quite soon. The first time I  tried to watch this film I had to give up after quarter of an hour. I was rather disturbed by the choice of director Joe Wright to represent Tolstoj's Anna Karenina's with a theatrical allegory. My first impressions were something like: "This  creates a distance between the watcher and the character's predicaments  feelings" or  "It sounds like a parody more than a tribute to a great novel!"
I've recently given  it a second chance and I'm glad I did it". Not that my idea on the direction has changed that much, but I am less disappointed after watching the whole thing. Once you get used to the staging device, you get beyond it and you start  relating to the characters once again.

A woman torn between her duty as wife/mother/aristocratic socialite   and her wish for passionate love, Anna is married to a government official, Alexei Karenin, and must fulfil her public duties in a very formal world. Anyway, after meeting Alexei Vronsky, Anna falls for the handsome young officer  and, after a first attempt to resist his advances, she will start her rebellious pursuit for love at any price. Passionate love will turn her into a brave woman,  who is confident she can win over social prejudices and ostracism, is convinced that she can bear  shame and  reproach, who even thinks she can survive being separated from her beloved son. She can't accept hypocrisy: "Respect was invented to cover the empty place where love should be".

Her passionate spirit and her determination don't allow her to accept any compromise.  She is ready to be unhappy in the name of love ("You killed my happiness, you murderer, murderer")  but is eventually disillusioned and broken, betrayed by that love, which  she had so ardently pursued and longed for.

Konstantin Levin, the co-protagonist in Tolstoj's novel, is quite in the peripherals in the movie though his story  runs parallel to Anna's with quite the opposite result : Konstantin's loyalty and endurance will be rewarded  with Kitty's love and marriage, while Anna destroys her family, Levin forms a new strong one. He is dutiful and socially awkward, he prefers his solitude to a worldly life. His heroism lies in his simplicity and modesty. He shares a humble life with his peasants from whom he learns to love small things.


Useless to say that my favourite story-line is Anna's stubborn pursuit of love, final failure of her dream included,  more than  Konstantin's successful marriage and final conversion.

My love for this novel  overcame my initial hesitation and even dislike for many cinematographic choices. I expected turbulence,  tragedy and emotional bite, but these are exactly the elements I recognized as lacking. The scenes and the costumes were gorgeous but the coreographic ensemble effect, the stylished bizarre direction, the theatre set deprived the relationships of their congenial pathos.

Thank you for this excellent review. I have heard that "A Royal Affair" is an exquisite movie and your opinion just makes my decision to watch it as soon as possible.

I really hope you'll like it, Aurora, if you come to see it. Let us know what you think!

Hi MG,
I was really looking forward to seeing A Royal Affair: somehow I suspected it was going to be good, and your rewiew confirms my thoughts.
As you know, to me KK-Joe Wright is a no-no, so I'd never chosen to watch Anna Karenina.
Have a nice day,
xx K/V - desperately dealing with home refurbishment :-(

Hold on, K/V! It'll be soon over and you'll have a newly refurbished house, go on holiday and ... who knows what else? Think positive! :-)
Thanks for finding the time to comment here.
Have a nice evening! MG

Sorry but I found Anna Karenina excellent!! I have just saw it again for the third time few day ago and the score is the same! Love this version: Joe choise, the actors, the costumes and the wonderful Dario Marianelli soundtrack....make me spend two hours in a few minutes :)
and for the pathos also in this dance....chills!!
Have a good day :)))