AT THE CINEMA - ROBERT PATTINSON IS BEL AMI


Bel Ami, starring Robert Pattinson, Uma Thurman, Kristin Scott Thomas, and Christina Ricci, will be available on VOD in the United States on May 4. The period comedy-drama will debut in US theaters — via Magnolia Pictures — a little over a month later, on June 8, according to the film's website. 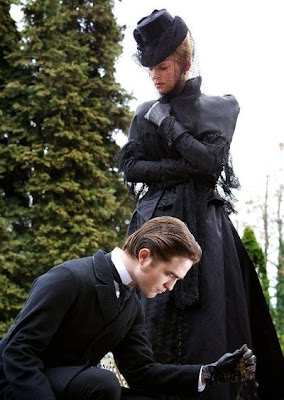 Bel Ami had its official World Premiere at the Berlin Film Festival in February, though the film had already had special screenings in various Belgian cities. Reviews so far have been mixed. It  has been on  in Italian  theatres since  April 14.
Directed by stage veterans (but film newcomers) Declan Donnellan and Nick Ormerod, Bel Ami was adapted by Rachel Bennette from Guy de Maupassant's 19th-century novel. The film's cast also includes Colm Meaney, Natalie Tena, Holliday Grainger, Pip Torrens, James Lance, and Todd Peterson.

Synopsis: Georges Duroy travels through 1890s Paris, from cockroach ridden garrets to opulent salons, using his wits and powers of seduction to rise from poverty to wealth, from a prostitute’s embrace to passionate trysts with wealthy beauties, in a world where politics and media jostle for influence, where sex is power and celebrity an obsession. 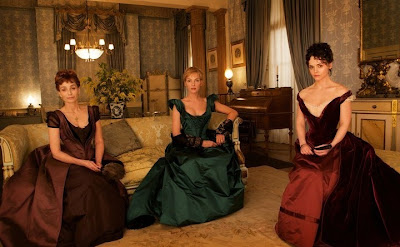 I wanted to see this movie for two obvious reasons you can easily anticipate: it is in costume and it is the adaptation of a classic. You know it’s always interesting to me when a  literary classic is adapted for the screen.  This time, it was not something from my beloved English literature and my memories of the book were rather faded. But still I went to see it and could even notice some differences from the novel.

I remember I started reading Guy de Maupassant’s BelAmi (1903) as a teenager - maybe in search for forbidden emotions - but  left my quest uncompleted  and, especially, disappointed by what I  found. More than a rogue and an anti-hero, Georges  Duroy was a really unpleasant, despleasing character. On a shallow note, women in the story were attracted by his bewitching moustache,  which I have always hated.  Then I couldn’t bear the fact that he was totally resistant to love and passion. He was only interested in his own ascent in society and , moreover, he didn’t seem to find real pleasure in nothing he had to do to get to his final goal.  Georges Duroy was  a very sad character with no hope of redemption and I didn't like him at all. 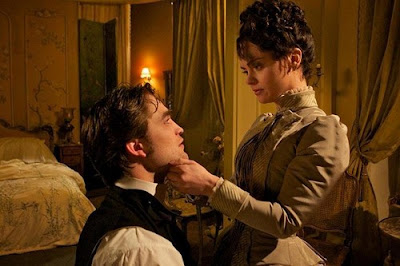 How was to see sweet vampire Edward turned into a cold bloodsucker? Robert  Pattinson  not the romantic hero any longer but a detestable,  self-conceited,  terribly charming man ready to anything on his path to power? Well,  I can honestly  say this role gave Pattinson the chance to use a little wider range of facial expressions, at last! Period costumes seem to suit him, they make him credible as the dark manipulating seducer,  incapable to experience real feelings - or  at least quite skillful at denying them in the name of a wealthy life. However,  in this film I couldn’t see Bel Ami as totally unscrupled and detached as he was  in the book ( and neither could Rachel Bennette,  it seems). There is a semblance of tenderness and humanity not only in the young cavalry officer arrived in Paris in search of fortune among wealthy society,  but also  in the successful seducer he little by little becomes. It is only after being used and tricked that he decides to revenge and destroy - no matter through what means -  those who had not been correct to him.  It sounds more a defensive strategy due to being attacked more than a natural  disposition to hurt and betray. 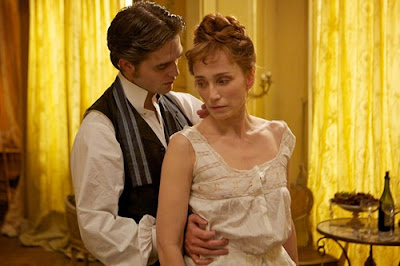 Georges hasn't got talent for writing but he is handsome, smart and power-thirsty so he uses what still nowadays seems the shortest way to glory: seduction.
He doesn't want to be poor like his parents,   hence  he tries to win the favour of the most influential women in Paris high society:  mature Virginie Rousset (Kristine Scott Thomas), brilliant Madeleine Forestiere (Uma Turman), who will also become his wife and write with him (or better for him) succesful articles about the political situation, and last but not least sweet Clotilde de Marelle (Christina Ricci). Three different ages and three different way of loving him, the three lovers of "Bel Ami" are the demonstration that women acted behind the curtain, driving the course of the events through their men. 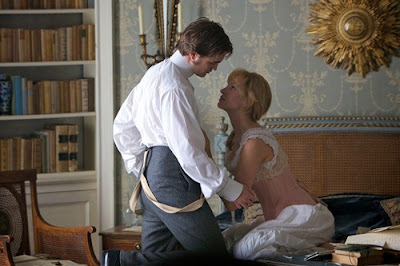 It is not easy to love this story or this character. Georges doesn't change, there's no redemption for him. The end is even more bitter than the rest of the story.
Why should you watch this film, then? To face the reality that the thirst for power and money can lead to aberration and to realize how very often beyond success there is a terrible void. You may even feel compassion for Duroy, "Bel Ami". He is a very unhappy man after all,  because he renounces the only power a human being can experience: true love. If not an unforgettable movie, not that bad either.
Posted by Maria Grazia at Tuesday, May 01, 2012
Email ThisBlogThis!Share to TwitterShare to FacebookShare to Pinterest
Labels: At the cinema, Costume movies, From Books to Movies

I do not agree with you...Bel Ami is one of my favourites novels, because of its deep portrait of the good and bad features of the society - not only the society of the end of XIX century but also our society. It is not a positive novel and has something in common with "Chéri" of Colette, but it is really well-write and describe mankind's nature with unusual realism. The question is: "The vampire Robert Pattinson will be able to embody effectively Duroy's pettiness, charme and emotional coldness? I don't know because I havent't seen the movie yet, but...I'll let you know what I think about the movie as soon as I'll watch it.
Kisses,
Irene

Dear @Irene, as I wrote the screenplay of this film has changed a bit respect to the book - which I read long ago and never finished. Duroy is not as cold and heartless as you expect after reading the book. He becomes like that in the end.
I'll wait for your review then. Meanwhile, "buon primo maggio" and thanks for dropping by and commenting.MG

I've never read the book, like you I have always preferred english literature, but I might be tempted to go and see this film. Thanks for the review!

@Vava
I bet I'd like the book much more now and I'd look at its protagonist and the social/historical background with different interest now. I should give it a second chance ... if only I hadn't an endless reading wish-list!

I like robert pattinson so much...
Thanks for sharing please keep sharing more :-)
50 Shades Movie

I like robert pattinson so much...
Thanks for sharing please keep sharing more :-)
50 Shades Movie