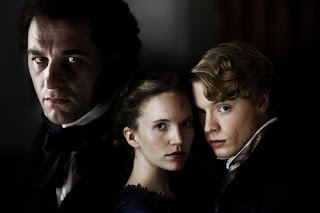 It's a good period for period drama. BBC schedules several costume series and also promising original modern drama in 2012.
For instance, the last two nights on BBC2 were dedicated to The Mystery of Edwin Drood (1870), an unfinished work which was Charles Dickens's last gift to his devoted readers, left incomplete when a stroke suddenly brought him away from the wordly stage he had always successfully and willingly trodden upon. When he died,   he was only halfway through this dark tale, "leaving all the balls in the air and numerous hints, blind alleys, unrevealed connections and intriguing possibilities on display" - says Diarmouid Lawrence, the director of BBC2 adaptation , which ended last night. 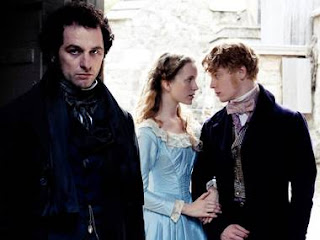 The story has been  completed  by crime-writer Gwyneth Hughes. Opium dens and drug addiction, lust and obsession,  stalking and a mysterious murder make this gripping Victorian tale quite a modern mystery novel. But we can't forget it was written by a genius story-teller in a time when the genre was only at his infancy.  Ms Hughes had to find solutions for so many unanswered questions (Who actually kills Edwin Drood? What is the meaning of that strange and awful cry in the night? What brings the prickly and defensive Landless twins all the way back from Ceylon to the sleepy fictional cathedral city of Cloisterham? And is that really a big white wig on Mr Datchery's head? ) and she did it brilliantly.

The story
Though the title of the novel features young Edwin Drood (Freddie Fox), the central character is John Jasper (Matthew Rhys), his uncle. He is the cultured and much-respected choirmaster of Cloisterham Cathedral but he hides dark secrets. Not only is he passionately obsessed with 17-year- old Rosa (Tamzin Merchant)  the fiancée of his nephew and one of his pupils,  but he is also addicted to opium which he uses to escape from his life of frustrated ambition and boredom.

When unexpectedly Edwin disappears, everybody thinks he has been murdered. Among the suspects, young Neville Landless (Sacha Dhawan), who has recently arrived from Ceylon with his twin sister Helena (Amber Rose Revah) to be educated by Septimus Crisparkle (Rory Kinnear), the minor canon at the cathedral, who has worked alongside John Jasper for many years. Young Neville Landless is hot-tempered and he also cherishes Rosa Bud. This sentiment will provoke  harsh rivalry between Edwin and Nevill since their first meeting.

A study of character

The aspect of the investigation on the mysterious disappearance is not as fascinating as the character study resulting from John Jasper's journey through the plot. That is a very intriguing element both in Dickens's manuscript and in Gwyneth Hughes's completion.

Mr Jasper is a complex, tormented, compelling antihero,  who easily becomes the focus of the reader 's interest. Dickens's daughter, Katey Dickens  stated that while writing The Mystery of Edwin Drood her father was not intrigued by the murder mystery in the tale, what most appealed to him was the observation of his character and "his strange insight into the tragic secrets of the human heart". Dickens knew how to get to the black depths of the soul and Ms Hughes's didn't fear to follow him down to the deepest.
A parade of Dickensian characters

If you've read the book, you'll notice that the screenwriter decided to leave out several features and a few characters:  the trains, the weir, former seaman Mr Tartar (who eventually,  for what we know of  Dickens's plans,  would have married  Rose), widowed landlady Mrs Billickin, bullying philanthropist Mr Honeythunder   and, in particular, the flying waiter. However, Gwyneth Hughes couldn't do without Mrs Crisparkle (Julia McKenzie) ,  who looks after her son , the reverend of Cloisterham Cathedral, and is also very sympathetic to John Jasper whom she has known since he was sent to Cloisterham as a lonely seven-year-old boy to study music; Mr Grewgious (Alun Armstrong) , Rosa's appointed guardian, an awkward solicitor, once in love with her long-departed mother; Bazzard (David Dawson), Mr Grewgious's enthusiastic and long-suffering clerk who investigates on Mr Jasper's secrets and on Edwin's mysterious disappearance; Stoney Durdles (Ron Cook), the keeper of the gloomy crypt under the cathedral which is at the heart of the mystery as a symbolical place of sin and death ; Thomas Sapsea (Ian McNeice), the pompous mayor of the town, always in search for an audience for anything he does.
I liked the two-part drama a lot. If not overwhelmed, I was  intrigued by the narrative solutions Ms Hughes has contributed to the incomplete work and I was once more amazed at Charles Dickens's skills as a story teller.
After Great Expectations, this is BBC's second tribute  to Charles Dickens in the year of his Bicentenary. Another excellent achievement, a new  precious gift for the lovers of classic period drama.


- Read this article from BBC News Should unfinished works be left untouched?


- If you like Dickens adaptation, you'll find several posts on FLY HIGH! Among them, Our Mutual Friend, A Tale of Two Cities, Hard Times, Great Expectations. 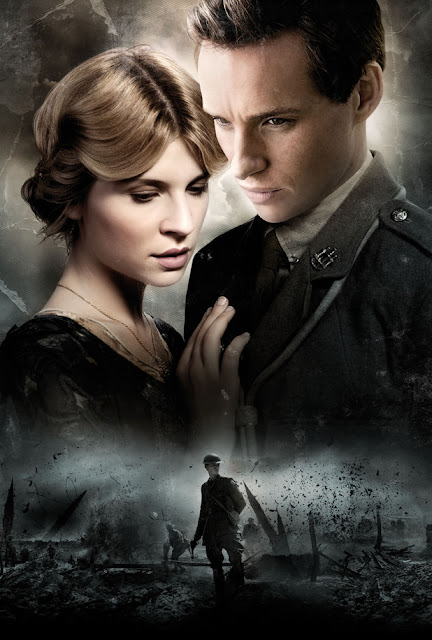 very good post! need to say you did a great job and i really appreciate it!