It's been a while since my last miscellaneous post. But, today has been such a full day, so intense and tiring that ...I can't simply stop now, nor close my eyes and sleep yet,  though it's nearly midnight. So, maybe to share some of my thoughts and emotions of the last 24 hours can help me to relax.
Let's start from ... last night, more or less this time last night. 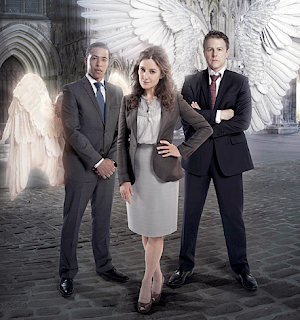 I'd been quite unwell yesterday, a virus's conspiracy against my poor digestive system has knocked me down for a while and being in bed all day but not fit enough to read or write, I re-watched some old stuff (ehm... not saying what, try to guess) and watched the latest episode of a new ITV1 series. I turned off my husband's iPad just at midnight, after the episode finished in fact.
I started watching this new series because it was set  in York and I was curious to see the beautiful city I visited in July filmed on TV. Then,  I went on watching it trying to understand whether I liked it or not.
Eternal Law is the title of the series, have you seen it? Sam West, Orla Brady, Tobias Menzies, Hattie Morahan are the other reasons why I got to see last night's episode too. However, I'm still undecisive on my response after 4 episodes. York is stunning, the cast is of first quality but ... the storyline hasn't convinced me, hasn't won me. Written by the same writers as Ashes to Ashes, though it features extraordinary winged beings like angels ... it doesn't fly. I'll watch the next two episodes and then ... the verdict, your Honour.

This morning I was exhausted, weakend by the desease, but got up and got ready to be at school in time. No regular lessons because the students had organized activities for the Holocaust Remembrance Day ... Lest We Forget. Could I stay at home? No, I went. Feeling dizzy and unstable, I tried to do my best and concentrate on the series of poems, slides, songs, literary passage readings, video interviews and movie clips they had prepared. Could I miss the chance to  revalue my spoilt kids once I had the chance? They did a good job, for once they were not the lazy, unmotivated kids to blame but young people to appreciate. And I was glad to do it. Lest We Forget, a poem to reflect on:
Holocaust
by Sudeep Pagedar
- Selected Poems
How do you
explain that term
to a ten-
year old boy
who, one day,
hears it mentioned
by some relatives?
And even if
you do manage
to make him
understand what it
actually does mean,
do you also
tell him that
because he is
A GERMAN JEW,
perhaps, some day,
he might be
included in it...?
Or should he
just not be
told, so that
he remains calm
and doesn't lose
sleep over it?
But what is sleep,
in front of death?
Perhaps Death is greater,
perhaps the two are the same;
we do not know yet
but we'll know, by the end of the day;
the Chambers are yet some hours away.
"To die, to sleep...to sleep, perchance to dream..."
How did Shakespeare realise that?
Did he know some Jew
who was persecuted too?
Perhaps he was wrong,
maybe he was right...
Anyway, I suspect we'll find out
by tonight. 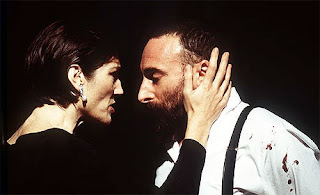 I've been correcting two different tests all afternoon and till this evening, then I prepared notes, excerpts, tasks  and videos for tomorrow's lessons. Yes, I work on Saturday. Five different classes each Saturday. Don't envy me that  much, please!
1. Shakespeare, Macbeth (Reading and Watching act II scene iii)
2. Writing Test (I prepared 3 different tasks among which students can choose - 120/130 words)
3. Shakespeare, Macbeth (Reading and Watching act II scene iii) (same lesson, different class group)
4. Medieval Literature - From the Ballads to Chaucer (Medieval Poetry) - I should revise the ballads we studied (Edward, Lord Randal, Robin Hood and Guy of Gisborne) , eliciting the students comments and introduce Chaucer and his Canterbury Tales. 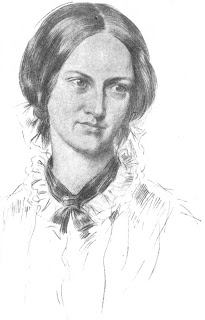 5. Reading excerpts from C. Bronte's Shirley and comparing them to the excerpts we read (and watched)  from Gaskell's North and South .
Curious coincidence:  while reading from, on and about Bronte and Gaskell for my lessons, I happened to find this article online: "Charlotte Bronte’s lost love letters to married professor were preserved by his wife". Of course, I'm not going to discuss such intimate matters with my students tomorrow but I've been thinking over and over about the cold picture we wrongly get of the eldest Bronte sister from her official biographies (Gaskell's especially) and how different, how fragile and human she becomes through these letters. Her passionate, improperly brave pursuit of a married man makes her quite modern and strong willed,  not the pious , almost frigid inhabitant of a desolate Yorkshire parsonage someone might have wrongly perceived . Sad, moving and touching that she could at least be fully herself through her characters. Jane Eyre could fulfill her dream after much suffering and Charlotte through her. As for Villette, at least Lucy's love was requited ...
Good night. Off to sleep. I have to work hard tomorrow so I must really go now.
Posted by Maria Grazia at Saturday, January 28, 2012
Email ThisBlogThis!Share to TwitterShare to FacebookShare to Pinterest
Labels: ITV Drama, Poetry, School, Teaching

I'm sorry you've been unwell MG. Do hope you're better.
I have to say, I love the miscellany of your day, the fill of literature and interesting viewing, the thrill of reading such a poem from one of your students.

I can tell you get as much a reward from that as anything!

Sorry about your bug, hope you are feeling better today. Not sure about Eternal Law, but I love York in it and I have always had a soft spot for Sam West...Have a nice weekend...Ciao. A.x

Thanks a lot Prue and A. I'll try to take care as much as I can, but bugs and viruses are not so easy to beat when you are tired and a little stressed.
As for Eternal Law, I too love York in it. So beautiful! No soft spot for Mr West, though I can appreciate his charm. Especially as a romantic angel. I prefer human beings though.
As I wrote in the post, not so sure on my opinion on the series, yet. Mixed feelings. No enthusiasm.
Have a nice weekend, both of you, and thanks for your comments! MG

Feel better SOON, MG. Hope that series reaches here soon. I liked Orla Brady in Strike Back. Have not seen Sam West yet. (Are you listening, BBC Canada?)

@Fitzg
I'm feeling better today, thanks Fitzg.
BBC Canada? No, on my husband's iPad I can watch many European channels among which the British ones. And I'm glad of it! I liked Orla Brady in Wuthering Heights and in Strike Back. As for Sam West, I saw him first time as Leonard Bast in Howard's End (Loved it, from E.M.Forster's novel), than in Maurice, Cambridge Spies, Desperate Romantics and, recently in Any Human Heart. He's a very good actor.
Have a nice weekend! MG

Having watched eps 1-3 I can't say I'm impressed: lovely locations (ah, York!), lovely Sam West (I'm partial to great voices, so I couldn't help noticing him), but... it doesn't work for me.
It's a pity, because I also like Orla B., Hattie M. and Tobias Menzies, my favourite Brutus :)
Have a lovely Sunday,
xx K/V

I agree with you on all your points, K/V. Wasted occasion. Something's missing.
Lovely Sunday to you, too! :D