If you feel  in a blue mood and like comedy, period drama and Colin Firth... well... watching EASY VIRTUE (Un matrimonio all'inglese)will work for you, just as it worked for me last night. This liberal adaptation of Noel Coward's play on the hypocrisy of English high society in the 1920s brought , in fact, a bubbly dose of humour to my otherwise sad end-of-a-hard-working day. Ben Barnes and Colin Firth worked first time together in this 2008 movie that was presented in last year Rome Film Festival. Ben is Colin's naive and good-looking son in this comedy. Their second experience together is, of course, for  Oliver Stones "The Picture of Dorian Gray", recently released (not yet in Italy). I particularly loved the locations, the brilliant cast of protagonists and the costumes. Directed by Australian Stephan Elliott. 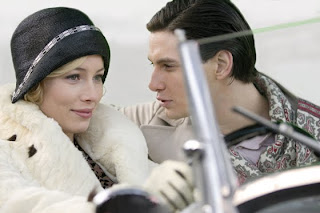 Larita, a fascinating American widow, a free-spirit and a successful racecar driver (Jessica Biel), meets young John Whittaker (Ben Barnes) in Monaco. They marry, and he takes his bride home to meet his family at their impossibly large rural mansion, where seven generations of Whittakers have been gentleman farmers. There she meets her icy cold mother-in-law, Veronica (Kristin Scott Thomas) and disheveled, sad-eyed father-in-law, Major Jim Whittaker (Colin Firth).

Veronica immediately  dislikes her new daughter-in-law and  is even more disappointed to find that she is a brash American who, like  her husband the Major, speaks fluent French. Larita also meets John's former girlfriend and neighbour Sarah Hurst (Charlotte Riley), who is gracious about the marriage. Larita remains calm in the face of her new mother-in-law's disdain, even admitting to being previously married. Veronica feels that John will soon tire of his wife and that the marriage will end in divorce. She works on making Larita unhappy, while making John content to stay.

Time passes, and to Larita's disappointment, John is not eager to leave the estate so that they can find a home of their own. Larita is bored and miserable in the countryside and hates blood sports like hunting. She reads Proust's Sodom and Gomorrah, which shocks her husband's female relatives, and she doesn't want to play tennis. She also dislikes Veronica's stuffy decor, her constant entertaining of her stuffy friends and the overcooked food. Worse still, she suffers from hay fever. She tries to get along with her mother-in-law, but Veronica refuses to accept her and resents her attempts to bring some fresh air into the situation.

Larita makes some inadvertent and extremely hilarious- gaffes:  accidentally kills the family chihuahua, gives some joking advice to the younger daughter, Hilda (Kimberley Nixon), that unfortunately results in embarrassment to, and enmity from, both John's sisters.  Larita finds herself increasingly isolated and demoralized by her mother-in-law's derision, verbal attacks and dirty tricks. Larita's only sympathetic friends are the Major and the servants, whom she treats better than does Veronica.

The Whittaker estate has fallen on hard times. Larita's handsome and charming young husband, once in the shadow of his dragon-lady mother, loses his independence and seems immature to her as he is drawn into family life. In addition, John's affection for Larita seems to be waning, as complains about his wife to Sarah, who finds his overture inappropriate. When John learns how bad the financial situation is for the family, his sense of responsibility to his family brings him closer to his mother and drives a wedge between him and his wife, as his mother had hoped.

For the rest and the end of the story, I'm afraid, you'll have to watch the movie or search somewhere else. I'll stop here. Just a clue...Colin Firth/ the Major  isn't a total loser - a friend of mine suggested- like his characters in The English Patient or Shakespeare in love...True!!! The character of the Major, he interprets wonderfully, is very appealing. Still reeling from losing all his men in the war, the Major has lost interest in his home, and there is no love between him and his wife. He is a sardonic, skeptical, solitary man now. But... not forever ...

I've never heard of this, but looks great! I'll have to check it out. I have an award for you:

How fun! I will watch it. Thanks for the review, Maria Grazia!

@hmsgofita
Wow!!! Another award. Flattered and honoured. I'll have a look at it immediately. THANK YOU!
@Elvira
Hola, amiga mìa! It is fun, indeed. And those beautiful English locations and those smart clothes! You must see it. Besos!

Thanks for posting this, Maria - great stuff. I saw this a while ago and quite enjoyed it - reviewed it at the time but my memories have faded. Enjoyed reading your review and seeing the pictures you chose.

I've just seen Ben Barnes and Colin Firth together in 'Dorian Gray' which I'm afraid I found very disappointing - Firth is really good (as always) but to me Barnes seems miscast and not at all convincing. You've reminded me that he was much better in this. Judy

@costumedramas
I'll have a look at your review of EASY VIRTUE then, Judy. I also quite like this film, I don't think it is ... perfection itself, but I like it. Ben Barnes is not the Dorian I've had in my mind all these years but I can't say anything yet since I didn't see the movie. I've read about "several disappointments" in the Net. Anyhow, I want to see it and, probably, face my own disappointmen. Thanks for commenting.

Sounds soo goood! and with Firth...well=)

I've been wanting to see this for awhile now. I think it's on DVD here in the States...I'll have to try to find a copy.

Thanks Maria, I will look out for this. Your blog is always such a joy to visit! xo

As I'm felling quite blue I'll see if I can find it. A comedy, period drama and with Colin Firth is everything I need right now!

I saw it at the cinema...it's a good movie,funny...and Colin is always great :)

I could not stand Jessica but liked Colin and Ben. Really looking forward to Dorian Gray.