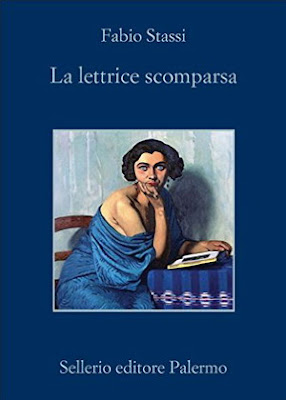 La Lettrice Scomparsa (The missing reader) is a literary mystery. A book which contains an entire shelf of good books (Nathaniel Hawthorne, Ernest Hemingway, John Fante, Jorge Amado, Luigi Pirandello, Honoré de Balzac, George Simenon among others),  an investigation on fiction and life, a novel wondering how much life and fiction interfere with each other. Can fiction help men and women endure life? Can life, real life, make it to a good book page? Can reading a novel be therapeutic?

Fabio Stassi is a writer I truly appreciate and whom I have already mentioned and reviewed here at FLY HIGH! His latest novels are set in Rome and deal with fragile characters coping with the harshness of reality. They are watched and described through the lens of poetry, music and fiction,  which are Stassi’s solid background.

The protagonist is one of my unlucky colleagues, one who has lost his position after being a temporary teacher in several different schools for years. Now middle-aged and unemployed, Vince Corso has to reinvent himself and to find a way to survive.  Bibliotherapy is the first thing that comes to his mind: as a teacher of literature and a book lover, book counseling is an activity he thinks he can be successful at.

Many women come round and ask for his help to cure depression, unhappiness, disappointment and other illnesses. Book suggestion after book suggestion, the reader discovers more about the protagonist himself and about his patients. Their stories are interwoven with the thread following the mysterious disappearence of one of Vince’s neighbours, a lady who’s been missing for a while, right after he moved to his new place in via Merulana.

What’s special in Stassi’s prose is its studied, refined simplicity. His style is pretty special,  a calm but rich flow of beautiful words.

(Translation:  "You should never believe a writer telling you his life because if he is a true writer, in each line and till the end of his days, he will renew the covenant of unfaithfulness to reality which he stipulated at the beginning of his career. (…) Every writer knows that in order to get an idea of the truth  they have to cross a sea of lies”)

Can you read it?

Only if you can read Italian, unfortunately. The only novel by Fabio Stassi translated into English is Charlie Chaplin's Last Dance. I'd give it a try, if I were you! 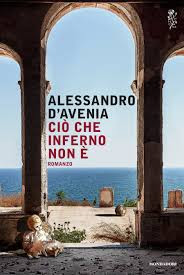 D’Avenia is another Italian writer who speaks directly to my heart, which he seems to know very well, though we’ve never met. This almost magical connection reminds me of what I experienced  reading as a child and thinking that the authors of those books I was just discovering were speaking right to me and seemed to know what I needed and dreamt of.

D’Avenia and I share something, actually:  the same love for our job. Not any job,  but a very unique one: teaching! However, this connection is not what made me appreciate his touching, unforgettable “Ciò che inferno non è”.

The title is inspired to a quote from Italo Calvino’s “The Invisible Cities”, which is practically what I''ve been calling my philosophy for a while now. Coincidence? But it is not the link to Calvino which made me love this novel so much, either.

The novel tells the story of Don Pino Puglisi, the clergyman killed by Sicilian mafia in 1993, from the eyes of Federico, 17-year-old, model student with a great deal of unsolved questions.

Don Pino is Federico’s  R.E.  teacher at school but he’ll become more to the teenager asking him to go and give him a hand at Brancaccio, Palermo’s most dangerous area. That’s the area of the city where Don Pino works and fights his daily war with mafia. He’s great plan to build a middle school for the kids from Brancaccio,  to save them from a doomed future of crime, will lead him to his tragic end.

In his novel D’Avenia gives new life to Don Pino, a man he knew as a student in Palermo, an extraordinary man able to generate the only epic possible nowadays, an everyday epic. A man capable, above all, of recognizing what is not inferno in the dark abyss of a real inferno like Brancaccio.

So what is it I particularly love about this novel to give it five stars out of five? ​

Like Stassi, D’Avenia knows how to use words beautifully. In this book those apparently harmless particles are smartly assembled together into sentences shaped as arrows aiming directly at the reader’s soul. Once those arrows hit, they are inexorable, they leave an indelible sign which flourishes into precious thoughts, smiles or tears. Thoughts, smiles or tears of beauty.

Can you read it?

I'm afraid the answer is again: "Only if you can read Italian". Alessandro D'Avenia's works haven't been translated into English yet, but you can find translations in Spanish, Portuguese, German and Dutch (have a look HERE).
Posted by Maria Grazia at Friday, August 19, 2016
Email ThisBlogThis!Share to TwitterShare to FacebookShare to Pinterest
Labels: Alessandro D'Avenia, Books, Ciò che inferno non è, Fabio Stassi, Italian books, La lettrice scomparsa, Reading, Reviews

Sounds like wonderful books. Because I can read Spanish, I can figure out a lot of the words, but unfortunately, I can't read nor speak Italian. My brother can--he was stationed at the Air Force base when he was in the US Army.