PERIOD & MORE PERIOD: POLDARK IS BACK - ARE YOU IN FOR SOME MORE CORNISH DELIGHTS AND BITTERSWEET DRAMA? 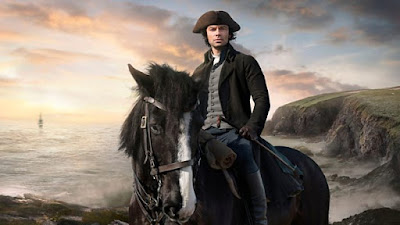 Autumn usually brings new series and new shows on TV.  Summer is going to end soon, this means we must get ready to some excitement. Are you waiting for anything in particular? Excited for any of the coming-soon shows?

I'm writing about mine, ok? What about sharing yours in the comments section? Too many question marks here! To the point!

What about Poldark series two? Isn't that something worth some enthusiasm? After the cliffhanger we were left with at the end of series one, I can't wait? Have you read the books meanwhile? Or re-watched the episodes of the first season?

Too many question marks again! Time for real news, now. Here is some info from the BBC Press Media Center website. Beware of some spoilers!

Aidan Turner as Ross Poldark and Eleanor Tomlinson as his wife Demelza are back on BBC One this September 4 at 9pm . The debut series peaked with 9.4 million viewers across TV and iPlayer, generating phenomenal media interest and devotion from viewers which culminated in it winning the Radio Times Audience Award at this year’s Baftas.

The cast: returning and new
This series introduces other key characters including John Nettles (Midsomer Murders) as Ray Penvenen, one of the county's wealthiest landowners, and Gabriella Wilde (Endless Love) as his niece Caroline Penvenen, a beautiful and manipulative heiress. Hugh Skinner (W1A) plays Unwin Trevaunance, a prospective MP who hopes that Caroline (and her fortune) will consent to marry him. But does Caroline's heart lie elsewhere?
Also back for the second series are Heida Reed as Elizabeth, Kyle Soller as Francis, Ruby Bentall as Verity, Jack Farthing as George Warleggan and Luke Norris as Dr Dwight Enys. Beatie Edney and Phil Davis return as Jud Paynter and his wife Prudie and Robin Ellis reprises his role as the Reverend Halse.
Synopsis
1790 and there is riot and revolution in the air. Ross Poldark (Aidan Turner) must fight for his freedom when George Warleggan (Jack Farthing) tries to have him hanged as a revolutionary. While Francis (Kyle Soller) and Elizabeth (Heida Reed) watch on in horror, can Demelza (Eleanor Tomlinson) save Ross from himself?
Crippled by debts, Ross and Francis try to heal old wounds by joining forces in a new mine free of the Warleggans. Ross and Elizabeth are thrown together by unforeseen circumstances, and Ross risks everything in a desperate smuggling venture. Meanwhile, the fate of the Poldarks is tied to Dr Dwight Enys (Luke Norris) and young heiress Caroline Penvenen (Gabriella Wilde) in unexpected ways.
The Poldark clan must learn to settle their differences once and for all, but at what cost? "He has everything. Ross is a very complex and layered character and there is so much going on with him all of the time. There is no black and white. He is a man of principles and moral code and I like that but at the same time he is never dull. He feels like a real person to me not just this iconic literary character, and that comes with good writing and character development from both Winston Graham and Debbie Horsfield. I can’t imagine ever getting bored." - Aidan Turner

" It’s an honour to play such an exciting and strong female character, it’s very rare that these roles come along and it’s brilliant to be given the opportunity. Demelza is so strong and also very modern in ways, her ideas and the way she lives her life. That’s what, I think, is so lovable about her - you can relate to her, to her situation and struggles.She’s very realistic; she certainly doesn’t sit there sipping tea when there are jobs and chores to be done or people to help. There’s also this rebellious streak in her. If Ross is going to misbehave, why should she stay at home and be the loving wife who is forgotten?" -  Eleanor Tomlinson

Who's the romantic hero of your heart ?

The Books
The new series is again 8 - episode and is based on books 3 and 4 of  Winston Graham's saga: Jeremy Poldark (1954) and Warleggan (1955, original title The Last Gamble) 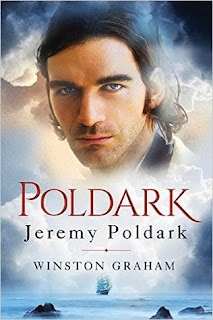 Jeremy Poldark
Ross Poldark faces the darkest hour of his life in this third novel of the Poldark series. Reeling from the tragic death of a loved one, Captain Poldark vents his grief by inciting impoverished locals to salvage the contents of a ship run aground in a storm—an act for which British law proscribes death by hanging. Ross is brought to trial for his involvement, and despite their stormy marriage, Demelza tries to rally support for her husband, to save him and their family.
But there are enemies in plenty who would be happy to see Ross convicted, not the least of which is George Warleggan, the powerful banker whose personal rivalry with Ross grows ever more intense and threatens to destroy the Poldarks. 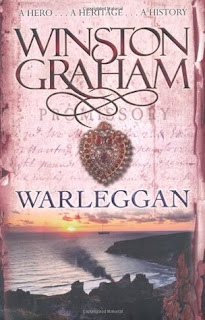 And into this setting, Jeremy Poldark, Ross and Demelza’s first son, is born...
Warleggan
When Ross and Elizabeth's old attraction rekindles itself, Demelza retaliates by becoming dangerously involved with a Scots cavalry officer. With bankruptcy an increasing possibility, the Poldarks seem to be facing disaster on all fronts.
Poldark  Season 2 premieres for US viewers too on PBS Masterpiece with a 2-hour episode at a special time: Sunday, September 25th, 2016 at 8/7c. The series then continues Sundays Oct. 2 - Nov. 27, 2016 at 9/8c.

6 Thing You Need to Know about Aidan Turner

Poldark Season 2 Behind the Scenes Video

Can't wait! I've got it blocked off in my calendar. If it's as good as the first season, we're in for a big treat.

You're right, Monica. I'm really excited for this second series. Fingers crossed it is at least as good as the first one!