This was an amazing series! The season finale was broadcast last Sunday 8 June, with an amazing crescendo of emotions but no news of a second series.  I think this story deserves a second season, I would be more than disappointed if it didn't get it.
An excellent historical fiction drama series,  starring a blend of great British and US actors, TURN  is a period piece that reveals the story of America's first spy ring.
A historical thriller set during the Revolutionary War, this TV show is based on Alexander Rose's book Washington's Spies. It was developed and written by Craig Silverstein (Nikita), who also serves as showrunner. It stars, among others, Jamie Bell (Filth, Jane Eyre, Nicholas Nickleby, Billy Elliot) , J. J. Feild (Northanger Abbey, Austenland, The Ruby in the Smoke), Seth Numrich (The Good Wife) and Heather Lind (Boardwalk Empire). 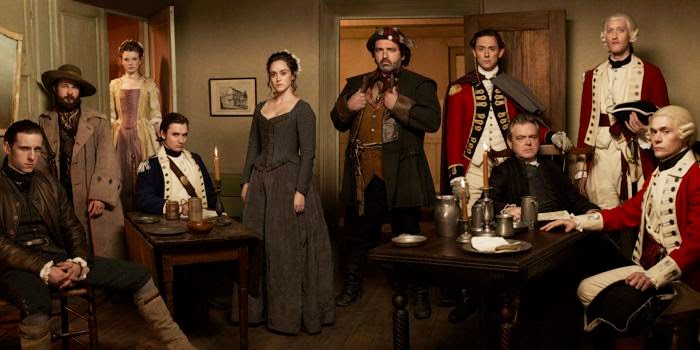 When General George Washington beat a hasty retreat from New York City in August 1776, many assumed the American Revolution was over. Realizing he could never beat the British military with might alone, Washington instead turned to a network of spies to out-maneuver his opponents, six amazing Patriots -- dubbed by George Washington the Culper Spy Ring -- who risked their lives for the freedom of their nation.

To know that the characters in this TV drama series are inspired to real historical figures -  remained unknown for so long -  makes everyhting even more thrilling. I was totally blown away by the extraordinariness and at the same time ordinariness of these people turned into main actors of key historical events.

Jamie Bell's Abe is a perfect example of that: he is so vulnerable and torn, so definitely scared of violence and killing, so stubborn and passionate. He is fundamentally weak, unable to control his feelings, emotions and instincts. All that,  I'd say,   will never make a good spy. But he will be just that: he was a farmer pulled into the Revolutionary War against his will, but turned into a good spy,  who bravely worked undercover and among enemies,  to support general Washington's cause. His most difficult task? to deceive his own father and wife, two loyal Tory supporters.

War is the main theme of course, but there's space for some love and romance,  too. In the inevitably foreseeable and omnipresent love triangle, it's easy to sympathize with Abe and his feelings for Anna Strong. Their dreams were shattered by Abe's sense of duty and guilt. A few years before, when his brother Thomas died,  he decided to break with Anna and marry his brother's fiancé, Mary, in order to honour his family's previous commitment with the girl's family. Abe strives to be a good husband and a good father, trying to forget Anna and to deny his feelings for her. And Anna, after all,  is now married to Selah Strong, a Patriot and a Patriot herself .

However,  after what happened in the final episode,  we can admire Mary's strength too. Abe owes his wife much now and she has increased her grasp on him ... I can see lots of pain coming ahead.

Looking forward to a public announcement, AMC: we definitely want a season two!

I agree 100%. This show got better each week and the season finale was amazing. I really hope there is a season 2.

I have not heard of this series till now and I will definitely need to look into it! Jamie Bell has always been a favorite, and J.J. Field as well. Thanks for posting about this.

I enjoyed it so thoroughly it was perfectly dramatized and I loved how you could check on a parallel blog about the historical accuracies and where liberties were taken to engage a modern audience. All the characters were great and we has fantastic performances. Simcoe is the worst nemesis of the year!