REVOLUTIONARY ROAD AND THE AMERICAN DREAM

(by guest blogger Lisa Keys) American fiction went through several noticeable phases in the twentieth-century. Naturally, there were those writers who strayed from the trend, but key movements can be identified that appeared from social, political and economic changes.

The century began with explorations of modernity, with the likes of Henry James discussing the foibles of modern society, before writers stepped excitedly into the world of the American Dream. This rapidly gave way to a less hopeful tone, following the Wall Street Crash of 1929, after which literature became awash with depression. From this depression emerged works such as Arthur Miller's Death of a Salesman (1949), which used the Loman family as a microcosm through which to explore the anti-climax of the American Dream. Finally, writers began to rebel a little and question the importance of this capitalism that they had all been fighting for. Leading this rebellion was Jack Kerouac, and the Beat Generation. Finally, in 1961 came Richard Yates' debut novel: Revolutionary Road. The book was recently made into a film starring Kate Winslet, (who also stars in Sense and Sensibility) and her now two-time on-screen lover, Leonardo Di Caprio. 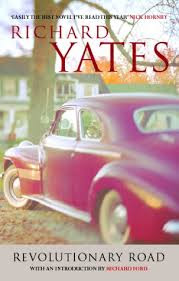 The revolution
The novel – set in 1950s Connecticut suburbia – uses the relationship of April and Frank Wheeler to examine what could be considered as the New American Dream. When they meet, April longs to be an actress and Frank wants to do anything but work in his father's firm. April is unfortunately terrible at acting and Frank's fate takes him exactly where he had tried to avoid. In a desperate attempt to reclaim the excitement and rebelliousness of their former selves, they plan to move to Paris, until April falls pregnant and Frank takes a promotion at work.
A large focus of the Beat Generation was to rebel against the American Dream by creating a new ideal that involved freedom, adventure and a focus on collecting experience rather than collecting possessions. As writers mocked dreams of capitalism and rags-to-riches tales, Yates seems to mock the idea that anyone can escape the mundanity of suburbia in 1950s America. The other couples on Revolutionary Road think that the Wheelers are special – they are the ones who don't quite conform to the ordinary lives that everyone else has. The reality of it, of course, is that they do and they can't handle it. Instead, they fall into depression, but not because they cannot attain the American Dream, rather that they have reached it, and it's not enough.

April and Frank Wheeler have everything that Death of a Salesman's Willy Loman strives for. Frank has a solid job that pays him well in the city, but is able to live out in the suburbs. They have two lovely children and a third on the way. They even have other couples in the street with whom they have dinner parties. They are living the American Dream, and yet they are trying to escape from it as desperately as Willy was trying to achieve it.
Failed attempts at escaping the reality lead to self-destruction for both Willy and April. Willy gradually becomes slightly mad before he eventually commits suicide, and April drinks away her sorrows, sleeps with her friend's husband and eventually tries to abort her own baby, which causes her untimely death. It is not uncommon fordisappointment from unrealistic dreams to lead to self-destructive tendencies, and fortunately there is now an abundance of rehab facilities in Connecticut to aid those who may have ended up on a difficult path. For April, however, she became isolated in her suburban prison, and could do nothing but create a new dream for herself and try to get Frank on board. Yates explores this idea beautifully in Revolutionary Road, allowing the tension and depression to subtly build while Frank and April continue to live their ordinary lives. There is something so regular about the trials of the couple in that their lives are perfectly comfortable, yet they are yearning for something more. It is what Andrew Fox calls "a yawning gap between their dreams of personal fulfillment and the realities of their mundane, workday lives." This mundanity is perfectly acceptable for those who understand that their dreams were exactly that, and are no more a part of reality than a childish desire to become a superhero.
Revolutionary Road joined a list of brilliant works of literature that took a cynical view of the American Dream. It bleakly highlights the flaws of the dream and the mundanity that it can bring, but all is not lost entirely. At the end of the novel, Shep, the man with whom April has an affair, returns to his wife despite the fact that he was in love with April. By sending him back to the security and comfort of his suburban life, Yates suggests that couples like the Wheelers are disruptive storms that upset the happy balance before departing and leaving everything exactly as it was before. They are transient revolutionaries, full of hope and promise, but with too little commitment to their cause to be able to change anything.
Lisa Keys
Posted by Maria Grazia at Monday, June 17, 2013
Email ThisBlogThis!Share to TwitterShare to FacebookShare to Pinterest
Labels: Kate Winslet, Leonardo di Caprio, Movies, Revolutionary Road, The American Dream