In Italy it was broadcast in 1978 and I still remember how excited I was waiting for a new episode! And I can't forget my teenage crush on Ross Poldark in his elegant breeches and coat, but especially on young doctor Enys. How young I was myself at that time and already in love with everything English!  I usually don't like watching period series from the 70s, I find them so freak, awkward. I can't cope with the  old shooting techniques or the unnatural, melodramatic acting style they propose. But, was my nostalgic mood forgiving all the flaws or was this series quite good, instead? I think it was, it still  is a very good period drama. You must of course bear the grain quality so different from the  HD quality images we are accustomed to these days.

Anyway, it was so good to re-watch this series again after such a long time and after watching so many other  costume series. It made me love it even more, flaws included. I bet anyone loving period drama will appreciate this long-running series (now available in a 4 disc - set) and would be amused, intrigued and moved by Captain Poldark's adventures.

The story in series 1
Brooding country gentleman Ross Poldark (Robin Ellis), an officer of the British army  which just lost the War of Independence with the American colonies, returns home in Cornwall, where he realizes  that everyone believes he was killed in the war. Arriving at Nampara, the Poldark family estate, Ross is shocked to find it almost a ruin, with lazy drunkard servants Jud Paynter (Paul Curran) and his wife Prudie (Mary Wimbush) living in that squalid place. Even more distressing is the news from his friend and lawyer Nathaniel Pearce (John Baskcomb) that Ross' uncle, Charles Poldark (Frank Middlemass), believing he is the heir to his nephew's estate, intends to sell one of the two Poldark copper mines  to  his enemy Nicholas Warleggan (Nicholas Selby), a grasping social climber from the emerging mercantile class.
Even more  troubling is Ross' discovery that his fiancé, Elizabeth (Jill Townsend), believing Ross dead, has fallen in love with Ross' cousin, Francis Poldark (Clive Francis), a weak-willed drunkard youngman who resents not only Ross' drive and ambition but his past with Elizabeth. Ross vows to win the haughty Elizabeth back, but his pursuit is complicated by the appearance of 13-year-old  Demelza (Angharad Rees), a petty thief and commoner that Ross rescues one day and brings home to work as his servant.  Add to this , one or two other love stories (the one between Dr Dwight Enys and pretty heiress Caroline Penvenen, interpreted by Richard Morant and Judy Geeson,  for instance) , a complex set of circumstances,  personal and family fortunes won and lost, the eternal struggle between the working class and the rich, smuggling and crimes of passion and illicit affairs, deadly duels and comical sketches  and you start to get an  idea of what an extraordinary drama Poldark  is. 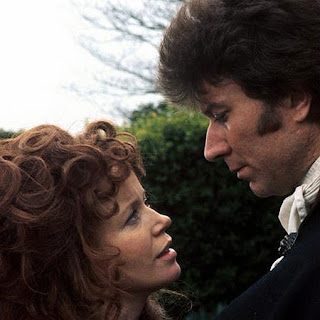 You'll find a late 18th century setting - Cornwall after the Revolutionary War, a historical setting I particularly like: Georgian England.  The casting is superb with typical English talents.
At the end of series 1 both male heroes, Dwight Enys and Ross Poldark,  are leaving to join the the Royal Navy and Army respectively. The closing scene is, however, full of hope:

"It won't last forever. Nothing is forever. Take it while we can. Live it. Fight it. Laugh at it."

"Take whatever life gives and call it ours. What anger. What chance. What love. What happiness."

Watch one of my favourite scenes in this clip

Oh, what a romantic blast to the past! I cannot believe anyone still remembers Poldark. I loved this series in my childhood. So glad I am not alone.

I loved watching this series and read all the books as well. My husband was always disparaging about the thick Cornish accents of some of the characters but I ignored him :)Thanks for bringing back memories!

I was absolutely in love with the series. I saved my pocket money and worked as tutor for younger students to be able to buy a cheap little black and white TV-Set because my parents didn't like the series and so I wouldn't be able to watch it.
Of course I have all the books and DVDs. ;)

It was a pretty good series, despite its flaws.