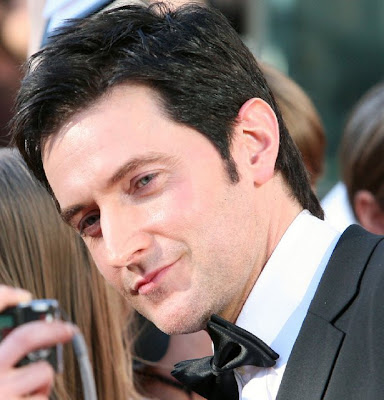 Ehm...Let me go straight out with it. I've thought about it a lot, I've talked about it a lot and, finally, I  decided I must follow my heart!
It's one of those days, you know, one of those big days. Are you wondering what kind of big days? Those in which you make big decisions.
Ah!  I love Geraldine and Harry J. Kennedy! Will they ever be back on screen together? Fingers crossed, stop kidding and ... to the point! 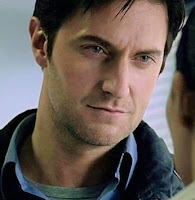 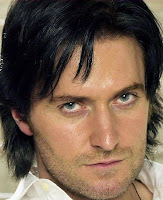 Don't look at me like that  ... I won't change my mind. (Lord, give me strength!)
I'm terribly sad at giving this announcement but I've actually been thinking about it much.
It's time to change. And,  honestly, not only that. This is my post n. 97 tagged Richard Armitage.  I posted RA Fridays from January 1st till December 31st in 2010. But it has really become hard for me,  it has started to give me terrible anxiety. What? The idea of Friday approaching and me having nothing to say about RA , it has started to give me troubles. Mind you, I've got plenty to say about Richard, but nothing you haven't  already heard or  read thousands of times. So I made up my mind:  it's been very satisfying, rewarding, exciting, stimulating but only till I had plenty of new things to write about. Now, it's time to change. So, sadly to admit it, I have to say good-bye to our RA Fridays and start thinking of something new. 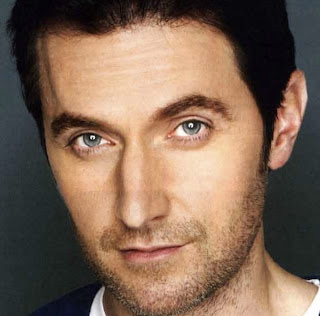 Don't stare at me like that! I won't neglect you, Richard,  promise!
Don't worry,  my friends. I won't resist long without posting somehing about RA ...  only it'll be out  of a weekly or periodical event, just any time I feel like doing it. Well, think that...  I could even post about him more frequently now! I hope to be overwhelmed by new things to write about. It'll be soon, knowing the man. And thinking of him right now ... I hope he's having or going to have a great time in New Zealand training for The Hobbit. Most difficult tasks for him? To bear wearing a fake beard (and a wig too? I can't imagine what  torture it can be!) and try to look like a dwarf . Yes, I know, CGI...but he will try to imagine he really is one to fully fit the role. Tough job for a giant! 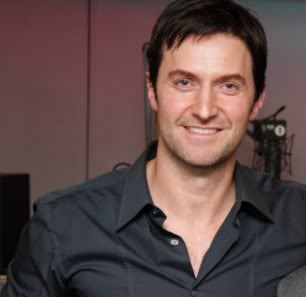 At last, he smiles!
Don't be sad! Stay tuned. Plenty of RA on Fly High very soon.
Have an incredible weekend. MG
Posted by Maria Grazia at Friday, January 07, 2011
Email ThisBlogThis!Share to TwitterShare to FacebookShare to Pinterest
Labels: Richard Armitage

It's sad that we won't have our RA Fridays, you know we won't mind if you just go on gushing about how great he is ;).

Anyway, the least we want is you to be anxious about it, so don't worry. We will stay tuned :D

oh do I understand :)
I look forward to any new post, RAful or less.. always a pleasure.
Have a wonderful weekend, what(or whom?)ever you fill it with :D

No worries MG....All good things must come to an end. And really you are not stopping posting about RA completely.
I enjoy visiting your blog for so many other reasons...like your love of books & movies & travels & Matthew Macfadyen & Toby Stephens & Rupert Penry-Jones, etc etc ;)
Cheers and have a great weekend!
tyme4t

@onemorelurker1 @teetotallynot @tyme_4_t
Thank you, girls! I appreciate your sympathetic comments. Till very soon, then, with RA or any other of my passions. Hugs!

I totally understand and would hate to think that RA Friday has been making you anxious! I don't know how you kept it up so long! How many times a week do you post? With your two blogs it must be daily or even more! The mind boggles!
I will read whatever you choose to write, whenever you choose to post it.
Thanks for all your lovely posts which are still there to reread, whenever we like!

@phylly3
You are a darling, P.That's exactly what I wanted to avoid: to get to hate something I love. But don't worry. I'll write about RA again and again. As I used to do before the RA Friday event started. Whenever I'll have something interesting or funny to say about , you'll find it here. I just needed some freedom from deadlines.
You're right, writing 2 (actually 3 with LEARNONLINE), I post almost everyday and sometimes my mind boggles, as you said. But it's also such a rewarding hobby!
Thanks for your support and your kind words!
MG

Thanks for all the RA Fridays, lady! Looking forward to random RA surprise-days now ;)

I agree with what has already been said. If you feel pressured by it, better to quit while you're ahead, so to speak, and just post whenever you like, about whatever you like. We're still going to read it with absolute delight! :)

I'm impressed that you've posted something RA-related every Friday for a whole year - I couldn't keep that up! Here's to many more interesting blog posts in 2011, regardless of the topic. :) Have a nice weekend and thank you for your wonderful RA Fridays in 2010!

Every Friday has been a delight, MG and it's hard enough to keep a blog going every day, let alone that very special Friday. But your blog is filled with such fantastic information for all the other days and you've established a wide and loyal group of followers, that you deserve to call it quits when you are ready.

My one hope is that you, above all others, get the chance to meet or speak with him yourself as you have only ever discussed his life in the most diplomatic and professional way. Congratulations on a job well done.

UOT? No more RAFridays? :-O
I won't read your blog anymore!
...
Sigh! You know I couldn't, even if you'd choose (God forbid!) not to write about RA at all. I started following you because of RA, and I'll be always grateful to him for letting me find such a wonderful friend *HUGS*
Have a lovely weekend,
xx K

@Skully, Traxy, Mesmered, Karen
What did I do to deserve all this? I'm moved to tears, ladies! I feel blessed I found followers for my blog but most of and above all, very special friends thanks to Richard Armitage. My life has so radically changed since I saw his Thornton a couple of years ago that, yes, I'd love to thank him in person. But I don't think I might ever find the courage to speak to him. Karen knows ...
Have a great weekend you all. :-)
MG

Oh no! But I do understand completely, and I am sure that it will be a lovely surprise when we see random RA posts through the year!

I think you've kindly given us so many excellent RA posts and look forward to whatever you choose to post about in future. Whatever they are, I'm sure they'll be informative and fun to read.

I will miss your RA Fridays very much, MG! But I'm sure you will entertain us with many other interesting topics and surely RA will pop up here and there in your blogs. Thanks for all of this. Ciao. A.