PICTURES FROM MY ROMAN WEEKEND 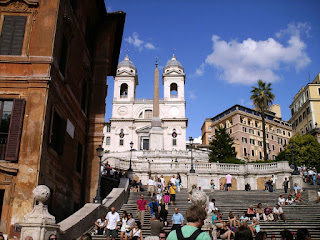 (Trinità dei Monti - Friday afternoon - August 6th)
I’ve been away for a couple of days, in Rome. The big city is not a familiar environment to me, since I live among hills and mountains, woods and a beautiful river. But having such an enriching, exciting place at 1-hour- drive distance becomes a wonderful occasion for unforgettable trips. I can’t do this – meaning leave family duties and escape to freedom – too frequently but any time I manage to it is an invigorating , motivating experience. 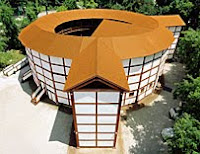 So, let’s sum up what I did : Shakespeare’s Molto Rumore per Nulla ( Much Ado about Nothing) at Rome Globe Theatre  (on the right) on Thursday night; on Friday,  at the National Library in the morning,  leafing through useful and interesting books/articles,  and being a tourist,  shopping and sightseeing,  in the afternoon; on Saturday,  visit to a stunning museum and … back home in the afternoon. 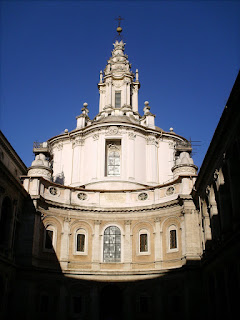 (Sant'Ivo alla Sapienza - Friday afternoon- August 6th)
I’ve already written something about the show at Rome Globe Theatre (HERE). I wanted to add something about the Museo Nazionale Romano dedicated. It is one of the World’s most complete exhibitions of ancient art kept in the 19th century Palazzo Massimo alle Terme – formerly a Jesuit college – near Termini Station.
The great bronze statues of the “Pugile”(The Boxer) and of the “Principe ellenistico” (The Hellenistic Prince) particularly stand out. 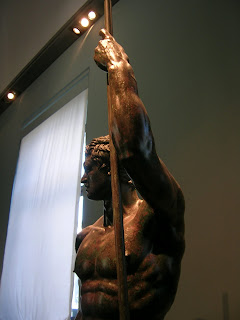 (Principe Ellenistico)
On the ground floor that surrounds the courtyard the halls exhibit Greek originals found in Rome and examples of iconography and portraits that range from the Republican to the Imperial age, such as the famous statue of Augusto Pontefice ( Augustus Pontifex) .
The next floor offers the ancient Salone dei Capolavori del Museo delle Terme with the Discobolo Lancillotti, the splendid Fanciulla d’Anzio (Maiden from Anzio) and the sensual Ermafrodito dormiente (sleeping hermaphrodite). 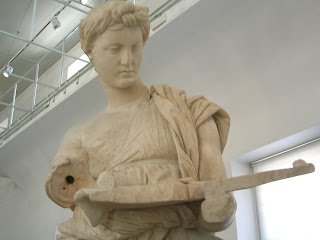 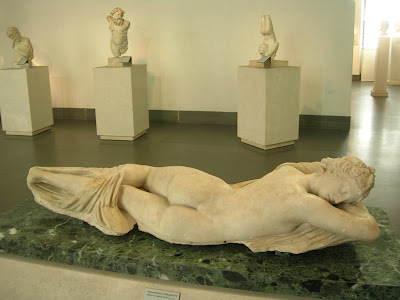 (Ermafrodito dormiente)
On the second floor , the complex frescoes, stuccos and mosaics are also particularly worthy. The marvellous paintings of Villa di Livia and the suggestively restructured painted rooms of the Farnesina constitute an effective testimony of the decoration of the rich Roman domus. 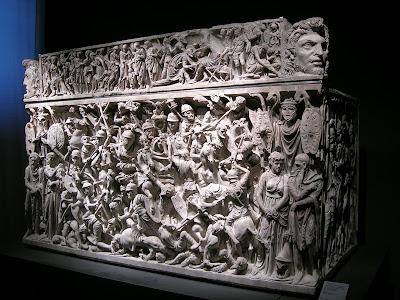 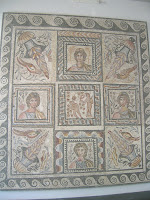 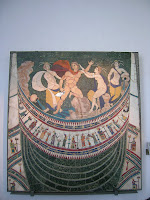 What a lovely report, MG: you should do it more often, IMHO ;)
Lovely pics too: Rome is so enchanting that I wish I were with you... hey! Wait a minute! I WAS with you :D And I enjoyed every minute of our time together *HUGS*
(Now talking to red Self) C'mon darling, the imposing bronze statue of the Principe Ellenistico deserves more than a half length picture, and I happen to know that you have - among many others - also a full frontal pic of him! ;)
xx K

@Karen
YES! You were there too and YOU took the pictures of the bronze prince and all the others in the museum. Piazza di Spagna and Sant'Ivo are mine... ALL MINE! Ehmm... I got distracted. I've been listening to a certain audiobook so far and...YES! I'm quite disturbed!:D Let's go back to the bronze prince. I had to choose the most prim and proper one, though Red -self insisted on the others, the ones you mentioned. See? You too would get on very well together! Next time SHE will come to Rome and I'll stay at home. Is that OK? Thanks for your comments and ...for the unforgettable days in Rome!

@MG: How odd... because I thought I was spending last weekend with Red Self, judging by her comments and reactions to a certain conversation Subject :-P

Great trip report--one hour from Rome! I truly envy you in that regard. I love sculpture, and your photos from the Museo Nazionale Romano are terrific, and the sleeping hermaphrodite reminds me of one I saw at the Louvre many years ago.

Great pictures, MG! How lucky your are to live in the middle of the countryside but still be near Rome! I haven't been to Rome for ages and I miss it so much! Yes, I cannot fail to notice too that you've "censored" the beautiful statues in the museums...Is it just that you wish to keep the "saucy" ones only for yourself? Ciao. A.

I adore travel photos and not many of my blogger friends post them.
Thanks for posting, glad you had a safe visit.

Thank you for the lovely photos. Much envy for living in a country in which a short drive renders all these treasures,

Speaking from the continent in which a 300-mile drive will unite family members, or a 3,000 mile flight will bring us together. (Plus, it's COLD six months of the year. And snows)...